Empty As The Wind

More than anything else, all the FDI rhetoric—pro or anti—seems opportunistic 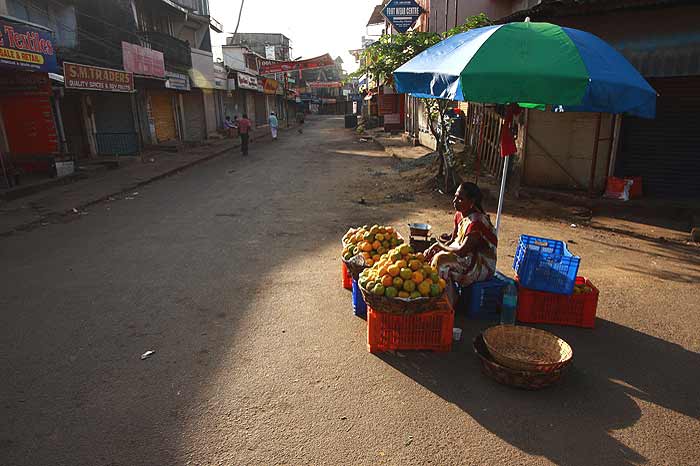 FDI: The Road Ahead

Where The Parties Stand 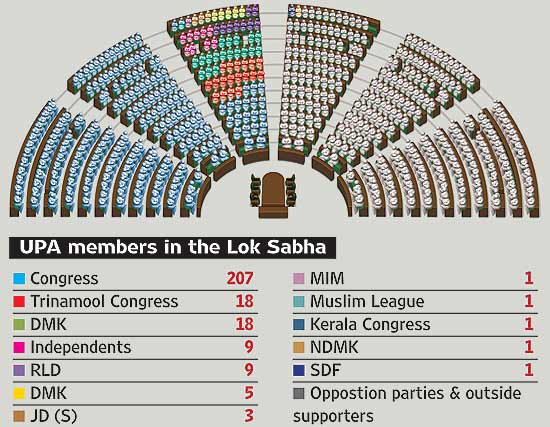 BSP, SP, RJD: Opposed to FDI in retail, may not back the BJP

To seek logic in a situation that defeats it is to hit one’s head against a wall. The central point about the entire furore over FDI in retail is that no one in the political class really understands the logic of the move at this time. There’s an argument that it is actually a masterstroke by the government to shed the image of political paralysis and divert attention from other embarrassments. But if that is the sole purpose of announcing a critical policy move in the midst of a Parliament session, then clearly this is a regime short on ideas and not averse to desperate ploys.

The other analysis from within the Congress is that a section of the establishment has no stakes in the future of the party and is therefore not averse to creating a crisis. “It is each to his own now, and a game of brinkmanship is being played from within the government,” says an MP. What is evident is that Manmohan Singh is ready to go the course, as he did on the nuclear deal. At the time of writing, there was no breakthrough on the Parliament dead-lock. The consensus emerging from the Congress is that the government would agree to the opposition demand for an adjournment motion if it managed to persuade allies like the TMC and DMK to support it or abstain from voting. Or, the government would just let the stalemate continue. For if the adjournment motion is carried, the UPA would be censured, and it would prove difficult to continue in power with moral authority. It could then lead to general elections. The political dynamics suggests great instability or a regime that somehow just limps along. What exactly will happen? The picture is fuzzy. Dr V. Maitreyan, an AIADMK MP, says, “We believe there’s a two-fold reason for this move at this time. They want to divert attention from issues like price rise, black money and corruption. And there is pressure from the western lobby. Perhaps they would next want FDI in the government!” 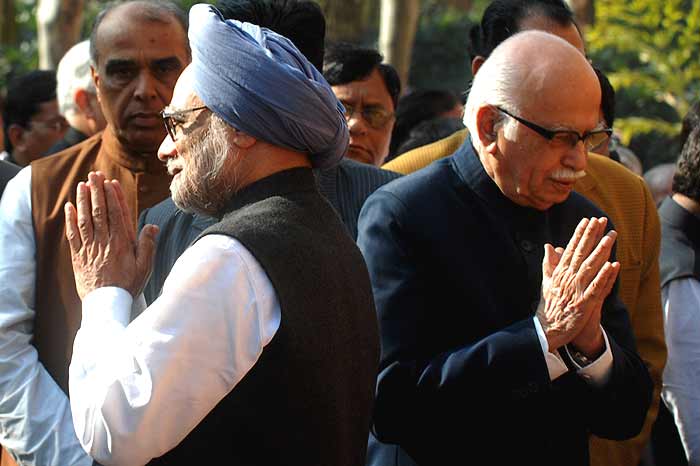 Janus-faced? Manmohan and Advani at a function in Delhi. (Photograph by Tribhuvan Tiwari)

What is clear is that the Congress leadership is quite determined to push through structures in a process they say is anyway in motion. Congress general secretary B.K. Hariprasad told Outlook: “This policy was on its way, though it seems to have come out of the blue. The common man and farmers will benefit. You wait and see, the situation will go the government’s way in Parliament. The opposition will be exposed, as they were over the nuclear deal.” He believes some sort of voting motion will be allowed and the government will survive it and therefore appear stronger than before. Congress spokesperson Rashid Alvi has even dared the opposition, saying, “If they have the numbers, let them bring a no-confidence motion.”

“We know there is really no difference between the Congress and the BJP on economic policy.”
D. Raja CPI

But what of the murmurs of disagreement from within the Congress? “Congress workers from Kerala face the Communists, so they have to take a certain line,” says Hariprasad. Other sources say Sanjay Singh, an MP from Uttar Pradesh, has expressed reservations only because of old rivalry (from their Youth Congress days) with Union commerce minister Anand Sharma, who has initiated the FDI policy. But that may be a facile explanation. There are huge vested interests that would get affected, and it’s only natural some MPs from an election-bound state would voice reservations if their constituency or their backers are opposed to the move. But Congress spokesman Manish Tiwari brushes all this aside. “There are only murmurs, and we don’t comment on individuals,” he says. “If the opposition wants to quibble and call an adjournment motion on everything, why should we succumb?”

Indeed, it may be accurate to say it is only the Left parties that have a clear ideological position on opposing FDI in retail. Others happen to oppose it only because they sense a weak Centre. D. Raja of the CPI says, “We know there is really no difference between the Congress and the BJP on economic policies. Sometimes the BJP opposes the government, sometimes it quietly lets critical policy changes take place.” 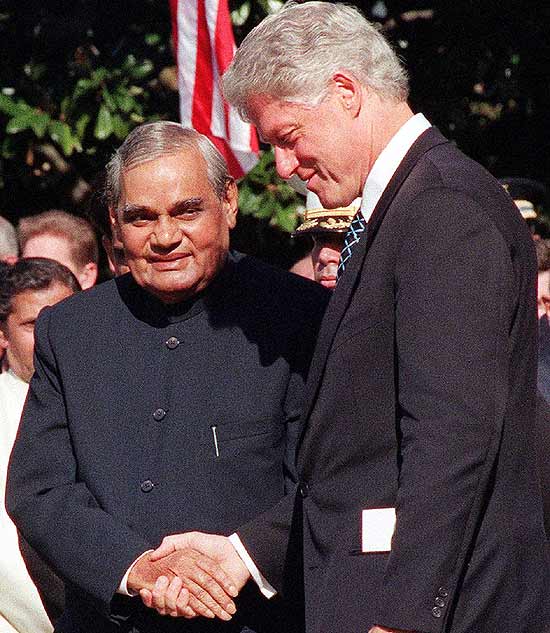 He certainly has a point about ideological inconsistency in the BJP. On economic matters, there has always been a great confusion in the ranks. There are votaries of swadeshi policies in the RSS, and in the party itself (such as Murli Manohar Joshi). The swadeshi line fits in well with the traditional RSS/BJP support base among small traders. Yet, there is also the strong instinct towards unbridled liberalisation that all right-wing parties across the world have. Someone like Arun Jaitley would have been expected to be in support of FDI in the retail sector. But he has been rising to the defence of the lack of consistency in the party line. He says “the BJP has a very clear position opposed to FDI in retail”. Murli Manohar Joshi says that “there is no contradiction between right-wing economic policies and the swadeshi belief system.” 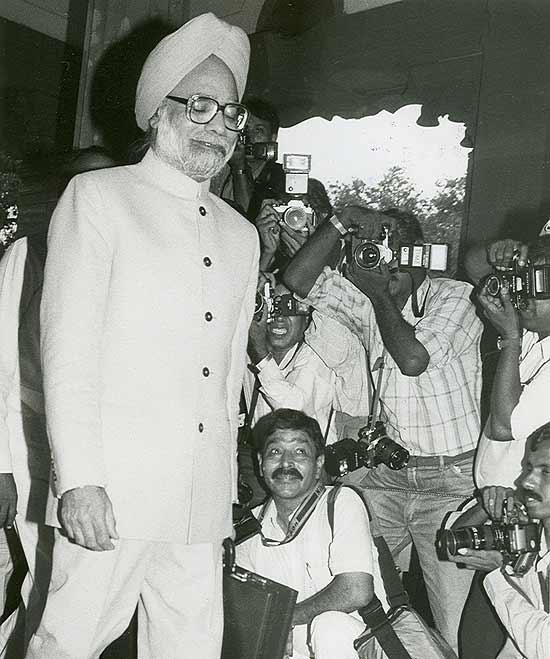 Yet, if we scratch beneath the surface, the contradictions are all too visible. On November 25, when BJP leader Uma Bharati told reporters in Lucknow, “If Walmart opens its outlet in any shopping mall or any part, I will set it afire with my own hands.... I am ready to go to jail for this”, the central leadership was not happy. Senior leaders summoned her, and as sources describe it, “gave her a dressing down”. A party source explains: “The central leadership in Delhi wasn’t happy with Uma’s statement as they did not want anyone to take such an aggressive stand. The plan was to play it by the ear. Leaders in Delhi also didn’t want her to take the lead in the agitation against FDI.”

There’s also the realisation that at one time, during the NDA days, Uma had spewed fire and brimstone and the BJP had had to articulate its own opposition quite forcefully. Uma’s statement, however, worked well to the script of the RSS. Sources confirm that the Sangh had clearly told party president Nitin Gadkari that the BJP “must not support the government on the FDI issue at any cost”.

That is why, just before Parliament began its winter session, when UPA’s troubleshooter and Union finance minister Pranab Mukherjee invited BJP president Nitin Gadkari to discuss the issue over lunch, the latter’s message was unambiguous: the BJP would oppose this policy. Sources close to Gadkari say “Pranabda was told quite clearly, so it is all the more strange that the government should announce this policy when Parliament is in session. The government is now blaming the BJP for the logjam in the House, but the fact is they knew what would happen.”

So we get back to the question that this was part of a plan—a plan to assert that Manmohan is still in charge. After all, the prime minister did declare at a Youth Congress convention that “it is a well-thought-out decision”. Or is this all the madness of a political season where there is actually no script and it’s chaos all round? So, just as there are arguments for and against FDI in the retail sector, there are varied opinions on whether this is a smart move or a disaster for the regime.

It’s a season where no one actually knows who is doing what and why. What is self-evident is that there are huge business lobbies at work and vested interests on both sides. In the political class too, the motives for acting in support or against the move may not be entirely honourable and are often just a reflection of petty intrigue and competitive politics. For instance, in the BJP, the FDI furore has diverted from L.K. Advani’s attempts to take centrestage again on the issue of price rise and black money. The veteran’s unbridled ambitions do not sit well with the RSS and a powerful section in the party. That may have certainly added to the party’s enthusiasm for taking a line that went against policies it has supported in the past.

Within the Congress, there is one conspiracy theory—that many veterans who orchestrated this drama do not care, as the future belongs to Rahul Gandhi and their time in the sun is coming to an end. Incidentally, just like the issue of corruption and prise rise got overshadowed last week, so did the national convention of the Youth Congress, which was intended to be showcased as the sum of Rahul’s achievements in reviving the moribund organisation.

Possibly, it’s all part of the grand chaos that appears to envelop the Congress. Often, there is a method to the madness. So the real story, perhaps, is not to look for political conspiracies but to see this as a big policy move that was inevitable. It is, after all, a reflection of the kind of economic policies the Manmohan Singh government has always supported.

By Saba Naqvi with Prarthna Gahilote

The Revolt: Act II, Scene I