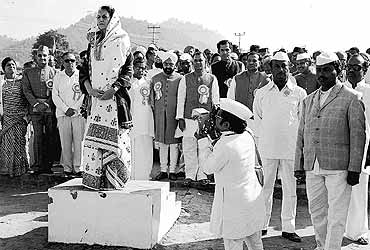 PMO Diary-I: Prelude To The Emergency
By B.N. Tandon
Konark Rs 800; Pages: 567
Bishan Narain Tandon was joint secretary in Prime Minister Indira Gandhi’s office for seven years (1969-76). He was witness to events leading to the Indo-Pak war for the liberation of Bangladesh, the imposing of the Emergency on June 25, 1975, and its aftermath. He spent his days in the PM’s office in North Block, Parliament House or when summoned, at her residence. Back home, he recorded his impressions of the people he had met that day. They fall in three categories: Indira Gandhi, her son and their coterie of advisors; cabinet ministers and senior politicians; and the author’s colleagues in the PMO. He strips the first two naked but spares his colleagues and himself. I will do that job for him.

The diary begins on November 1, 1974. The victorious Durga of the Indo-Pak war had shrunk into a mortal beset with imaginary fears of everyone plotting her downfall; she trusted no one besides a few untrustworthy, semi-literate minions, became short-tempered, impetuous, arrogant and unsure of herself. Serious charges of corruption had been levelled against Tulmohan Ram and L.N. Mishra. Hovering above her like a thundercloud was Jayaprakash Narayan, with another building up under Morarji Desai. Against advice, Mrs Gandhi was determined to defend Mishra without concern about moral principles: she simply wanted to prove to the country that she was the boss. Also a little unsure of her ability to prove her point. Unlike her agnostic father, she sought counsel from soothsayers and priests. Tandon has the word of his colleague N.K. Seshan, the PM’s personal secretary and principal purveyor of gossip, that L.N. Mishra "has sent a Swami staying with him to her residence to perform puja.... She keeps having such pujas. Even the time for the swearing-in ceremony for ministers is decided after consulting astrologers". Tandon writes, "P.N. Haksar once told me that the PM was inclined towards sruti and not smriti. I was upset that people like Om Mehta, who had very little understanding of any subject, told the PM all manner of things merely because of sycophancy". Similar opinions are expressed about R.K. Dhawan "who offers advice to the PM on things about which he knows nothing. What’s worse, his advice and suggestions are taken seriously". As rumours of her one-time stenographer Yashpal Kapoor acquiring valuable real estate in New Delhi’s prime residential area and her son’s ham-handed attempts to manufacture a people’s car became public knowledge, Mrs Gandhi’s attempts to stifle criticism and punish critics became more frenetic. She appointed a man of her own choice as chairman of the Central Board of Direct Taxes who took orders directly from her. "The misuse of cbi, raw, etc, has become a topic of common discussion." H.Y. Sharada Prasad, her press advisor, was of the opinion that her distrust of people and turning nasty towards those who had stood by her was due to her loneliness from childhood: "She looks at every question solely from her own personal point of view. She lacks generosity, lacks self-confidence and is somewhat arrogant. All this has made her a very difficult person." Her cousin B.K. Nehru, who had been high commissioner to the UK, and governor of Assam and Nagaland, thought she had no understanding of economic issues and even simple things seemed difficult to her. She was only interested in slogans like garibi hatao.

Having innate distrust of her colleagues, she turned for advice to people without knowing their background. One of them was Rajni Patel whom she put in charge of the Bombay Congress Committee. "Like many other opportunists, he has joined the Congress after it split in 1969. Unfortunately, he does not have a good reputation," writes Tandon. He was a wheeler-dealer and made an agreement with the Shiv Sena. Another was Kishan Chand who was made the Lt Governor of Delhi at the recommendation of Sanjay Gandhi and R.K. Dhawan. On the last day of 1974, Tandon summed up his impressions of Mrs Gandhi: "The main cause of the crisis is the PM’s personality and character. I have always held that three qualities are needed to lead the country: character, ability in its broadest sense and tolerance. Unfortunately, the PM is deficient in all three. In fact, she is completely lacking in tolerance. As far as ability is concerned, she is very able when it comes to political manipulation. But she has no ability to think seriously and in an organised manner about serious issues. I have discussed various issues for hours on end with her. But I have always felt that I am talking to a person with very pedestrian intellect whose concerns are not with the substance but with the form. She is only concerned with the impact on herself and on politics. She is not at all interested in the values which her father had done so much to foster. She is outwardly civilised and decent but she totally lacks cordiality.... She does not have the high moral standards expected of the country’s leaders."

Early in 1975, Mrs Gandhi’s troubles began to mount—not in a single file but in battalions. JP’s call for a total revolution began to gather strength. Morarji Desai became restive, then openly defiant; her election to Parliament was challenged by Raj Narain and many people knew that she tried to fiddle with records to disprove that Yashpal Kapoor was still drawing salary from the government when he became her election agent; Sanjay’s plan to manufacture Marutis in large numbers floundered. She sensed power slowly but surely slip out of her hands. The usurper was her own son, Sanjay. She told her law minister H.R. Gokhale that "she was unable to sleep at night and that Sanjay’s behaviour was uncivilised and rude. The law minister said that he behaves rudely not just with him but with his mother also". Goddess Durga was not astride a tiger but her own son, and could not afford to dismount lest he eat her up.

Mrs Gandhi began to crack up. Her speech in the Rajya Sabha on the President’s address was "hollow and full of mistakes...whatever she said about corruption was completely without substance. For instance, a reply has been given today that the engine used in Maruti was not imported. This major act of corruption has been carried out only for the sake of the PM’s son". She suspected treachery where there was none. Most of all, she suspected Babu Jagjivan Ram and began to collect information against him. "This is perfectly consistent with her style because she constantly worries about her senior ministers and keeps up secret activity against them," records Tandon.

Mrs Gandhi vented her anger against people who could not hit back. One was Chedi Lal, IG of police, Pondicherry. Another was the highly-respected civil servant Dharam Vira, then governor of Mysore. She did not like some statement he had made and summoned him to Delhi. When he arrived, she had no time to see him and he returned to Mysore. "She was livid." She got annoyed with Pavate, then governor of Punjab, and wanted to dismiss him. She summoned industry minister T.A. Pai and gave him a severe dressing down. A streak of sadism hitherto unnoticed began to manifest itself.

On June 12, 1975, Justice Jagmohan Sinha of the Allahabad High Court set aside Mrs Gandhi’s election to the Lok Sabha on grounds of corruption and debarred her from contesting polls for six years. She lost her cool. While she consulted lawyers like Gokhale, Nani Palkhiwala and S.S. Ray, she encouraged Sanjay, Dhawan, Bansi Lal and Kishan Chand to organise mass rallies in her favour. To add to her woes, her party lost the elections in Gujarat. In her appeal to the apex court where Palkhiwala appeared for her, all she got from the vacation court judge Krishna Iyer was a stay order depriving her of the right to vote. She didn’t want to resign and hoped that the mass rallies her son and his cronies organised would somehow vitiate the judgement. Mother and son ticked off information and broadcasting minister I.K. Gujral for not publicising the meetings. Sanjay, who little respected constitutional proprieties and understood how people feared the danda, took over the administration in his mother’s name. On the night of June 25, 1975, a docile Fakhruddin Ali Ahmed signed the proclamation of Emergency. All leaders of the Opposition, including JP and Morarji Desai along with over 10,000 (the figure rose to 30,000) others, were put behind bars. The mettle of our leaders can be gauged from the fact that not one cabinet minister uttered a squeak in protest: Jagjivan Ram, who had shown signs of dissent, agreed to lead the motion of approval in Parliament, Swaran Singh argued for it like a mofussil lawyer, the Chhatrapati of yesteryears, Y.B. Chavan, lost all his valour. They were like a bunch of eunuchs (no offence meant to our hijda brothers/sisters) willing to dance and clap to any tune. The only ones to prove their manliness were two Parsis—Palkhiwala, who returned his brief, and Fali Nariman, who resigned as Additional Solicitor-General.

Tandon sums up his reactions quoting Harivansh Rai Bachchan’s poem, Kaliyug Ka Chorus: On hearing of tyranny,With fingers you plugged your ears, And blindfolded your eyes, On discovering a swindle spree, Then sealed your lips, Allowed a ruffian rule./Oh, you Gandhi’s monkeys three, If there is some shame left in you, Slap your face red—each one of you."

A post-script is in order. Tandon has praised his colleagues in the PMO—P.N. Haksar, P.N. Dhar, N.K. Seshan, H.Y. Sharada Prasad—all able and men of rectitude. Did any one of them do more than gnash their teeth at their luncheon meetings? While they accused others of cowardice, did any of them have the guts to resign?

Tandon got a taste of Mrs Gandhi’s vengefulness after he was reverted to service in UP. He notes: "Not only did she decide that I will not get a position at the Centre, the Uttar Pradesh government was unofficially and orally instructed not to give me even the due promotion." All I can say to that is: serves you right! And I will look forward to reading your volumes to follow.