With skeletons galore tumbling out of the Mahajan closet, BJP is re-examining the entire Pramod Mahajan legacy 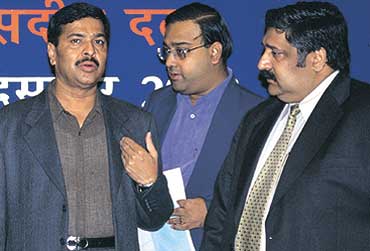 outlookindia.com
-0001-11-30T00:00:00+0553
There is a cruel irony in the sudden death syndrome hitting the BJP in the football season. Pramod Mahajan's loyal aide Vivek Moitra dies of a drug overdose just weeks after the BJP leader is murdered by his brother. His son Rahul ends up behind bars for being part of that same dizzy party the night before he was to immerse his father's ashes. (The ashes eventually go by a courier service to Guwahati where the Assam unit of the BJP organises a small ceremony on the banks of the Brahmaputra). In quick succession, the BJP has received two sharp kicks in the shin.

India Shining is now being called India Snorting—in BJP circles. Asked how the party of Ram bhakts had produced coke/ heroin-snorting party animals, spokesman Prakash Javadekar kept a straight face and his sense of humour—"it shows we are now appealing to all sections of society". But by the time an SMS went out suggesting that the BJP's name be changed to Bharatiya Janata Let's Party, the joke was beginning to fall flat.

Sushma Swaraj snapped at reporters: "This is a private matter. It has nothing to do with the BJP." But given that posters eulogising Pramod Mahajan are still plastered across major metros like Delhi and Mumbai, her distancing appears too abrupt and too sharp. Rahul and Vivek were both children of the BJP. Emerging from his vacation in Manali, former prime minister Atal Behari Vajpayee was one of the few leaders willing to concede this. "Sometimes our youth get misled. They have to be shown the right way," he said.

Vajpayee may have taken a more considered position as more muck is likely to emerge from this episode. Outlook has exclusive information that an influential relative of a senior BJP leader visited the Mahajan residence on that fateful June 1 night, promised help in settling some financial disputes and left. The revelry that followed was part celebration since the intervention of this person could sort things out. Besides, it would have been downright dishonest of Vajpayee to have disowned Pramod Mahajan's child. After he became prime minister and shifted to Race Course Road, it was Pramod who had hosted his foster grand-daughter's birthday party, having moved into Vajpayee's old residence round the corner at 7, Safdarjung Road. The party was catered for by Sudhanshu Mittal, the infamous "tentwallah" and the most influential member of Pramod's inner circle. 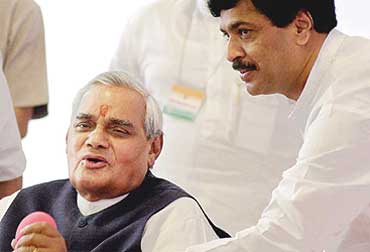 But now that Pramod is gone and his son been found doped out, the BJP is re-examining what is being called the Pramod Mahajan legacy. Much of what has happened is being blamed on the fact that Pramod virtually ran a parallel financial empire within the BJP. Suggestions of murder by coke/heroin have been doing the rounds since it was known that, in the weeks after Pramod's death, Vivek had been complaining about former cronies refusing to return funds parked with them. Given that Vivek was the only individual who knew every detail of the complex financial matrix established by Pramod, many individuals stood to gain by his death.

The murder theory goes something like this: an individual who knew that Vivek occasionally used drugs got through to the dealer and ensured that spurious stuff was passed on. Vivek was the real target, Rahul an unintended victim. Since the BJP is full of cloak-and-dagger politics (remember the secret sex recordings?) and everyone is busy stabbing the next person, implausible stories begin to sound possible in the party of the faithful. But if this was indeed a planned murder of Vivek Moitra, it's enough to do Agatha Christie proud.

There are other sources close to the Pramod Mahajan household who reveal that what was a busy humming establishment by day became a very shady place by night. Says a professional who worked on the India Shining campaign from the residence: "There was a cloak of secrecy about the goings-on. Only Vivek seemed to know who was coming or going, and he was very secretive about it. We imagined cash arriving or women but no one knew for sure. Pramodji was very secretive about his dealings. He created several financial nodules independent of each other." And Vivek was the keeper of his secrets.

But like Mahajan, he too is now gone. What has remained are rumours of sex, drugs and hard cash. Like Pramod, Vivek too never pretended he bathed in Gangajal. Brash and a bit of a show-off, he loved to talk of parties in Mumbai. While waiting to see Pramod, he would joke with this correspondent: "When you come to Mumbai, I will show you what a real party is." He spoke of discotheques like Velocity and named starlets whom he promised would party with us humble journalists. No one really took him seriously. One just put it down to the inanities mouthed by an influential private secretary.

Indeed, the larger crisis confronting the BJP is the fact that the Pramod empire flourished under the nose of the Vajpayee PMO, if not inside it. He was also known to maintain the household expenses of at least one senior RSS functionary on loan to the BJP. Enormously talented and intelligent, Pramod was also controversial, and he knew it. "I am not going to be made president, so I will not worry about it," he would tell journalists. Yet he was a central figure in every enterprise undertaken by the BJP, be it L.K. Advani's original rath yatra or the India Shining campaign. With his dramatic career and death linked to the rise and ebb of the party, it will be impossible for the BJP to disown Pramod overnight or claim to have nothing to do with his son or dead secretary. Perhaps that is why Mukhtar Abbas Naqvi and Javadekar later modified the "we have nothing to do with this" line to say that they would never desert the Mahajan family.

However, what could emerge as another troubling factor for the BJP and the RSS is the fact that the tattered remains of the Pramod empire appear to be busy grafting themselves on to president Rajnath Singh. Take Sudhanshu Mittal, for example, central to Pramod's world. Two months ago, Rajnath had tried his utmost to get Mittal elected to the Rajya Sabha from Uttar Pradesh. Mittal lost the election to Mehmood Madani of the Jamait Ulema-i-Hind. But the niggling question remained: why should did Rajnath go out of his way to help a controversial Delhi businessman get a foothold in Uttar Pradesh? Even before Pramod's death, there were whispers about Mittal ingratiating himself with Rajnath. Highly-placed sources reveal that Vivek constantly complained about Mittal getting too big for his boots because he thought he had a new friend in Rajnath. But since such disputes are often a fight between thieves, one could well argue that Vivek perhaps was over-reaching himself after Pramod's death.

One thing is clear, though. With enough muck spilling out into the open, the crisis in the BJP has reached epic proportions. Insecurities are rising; it is each man for himself. Pramod was not the only individual who knew how to raise funds in the party. He was just better at it than others like Ananth Kumar and Venkaiah Naidu who have also been involved in financial scandals. Not just that, pracharaks have been caught with their pants down and chief ministers are rumoured to have spent hefty sums to ensure their longevity in office. Not to forget the cash-for-questions scandal that entrapped several BJP MPs at the beginning of the year. And as if these weren't enough, now comes along a drugs scandal. 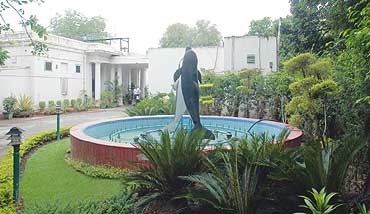 Perhaps Pramod Mahajan was indeed a rotten apple. A man who built an empire on sleaze and ill-gotten gains. Now, some may even say he did not know how to raise his own son. But if he did indeed rot, it was within sight of individuals who still see themselves as venerable leaders of the nation.

What the BJP should really worry about now are the others who are emerging like vultures and trying to line their nests before they face total political oblivion. It is not that the BJP does not have a future. But many individuals in the party do not. And they are getting increasingly desperate.

As for Vivek and Rahul, both had understandably become orphaned and desperate men in the wake of Pramod's death. Perhaps that is why they preferred to lose themselves in the haze of a coke/heroin cocktail.

Such a long journey for the party of Rambhakts.