Though pegged to personal interactions, has a delightful undercurrent of history and international politics. 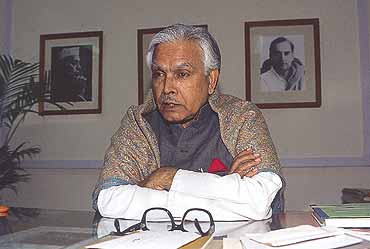 Heart To Heart
By K. Natwar Singh
Rupa Pages: 302; Rs: 395
This latest literary offering by friend and colleague Natwar Singh is different from his other books. It is a collection of articles which Natwar wrote between 1985 and 2002, the period in which he left the Foreign Office and took on a political incarnation. Becoming a politician abruptly terminates mental life in more ways than one but Natwar has commendably kept alive his literary, intellectual and non-political interests. A committed bibliophile, he is not only a thorough reader but also keeps notes on the books he reads, extracting relevant quotes to embellish his own writing.

Heart to Heart is a literary montage of his many interactions with distinguished Indians and foreigners, from Don Bradman to R.K. Narayan, from Octavio Paz to Zia-ul-Haq, from Jawaharlal Nehru to E.M. Forster and Ne Win of Myanmar. He has laced his writing with ruminations on their personality, political views and writings. Han Suyin and Forster have figured before in Natwar’s writings as they were both old friends. But I enjoyed reading the chapters on R.K. Narayan and C. Rajagopalachari, who were not personal friends but with whom he kept up a correspondence. You get a glimpse of not only their personalities and their work but also their human predicament and humility. The question he raises about Rajagopalachari is apt: "He had so much to tell, why did he not wish to write his biography?" What he says about Jawaharlal Nehru and Indira Gandhi is not unexpected but he does reveal their spontaneity, wit and informality. There is some poignancy in the way he bids farewell to Rajiv Gandhi and Madhavrao Scindia. Some historical figures are also dealt with, such as Alfred Nobel, Winston Churchill, Subhas Chandra Bose and Sarojini Naidu.

I was particularly taken by the first chapter where he narrates the impending controversy and resulting tension between four powerful ladies, Indira Gandhi, Margaret Thatcher, Mother Teresa and Queen Elizabeth I.

Given my professional past, I found the chapter on Zia-ul-Haq, ‘Master of Courtesy and PR’, and ‘The Art and Craft of Diplomacy’ of special interest. Having met Zia-ul-Haq personally, Natwar Singh has described and assessed him to a T. In an amusing but very accurate portrayal of Zia-ul-Haq, he says he looks like a B-Grade British actor. One presumes the actor that Natwar has in mind is Terry Thomas.

I have always felt that Natwar Singh writes much better than he speaks. Perhaps he believes in the logic of the dictum: Verba volant-scripta manent—spoken words fly away into oblivion, written words abide. In one or two cases, Singh has been generally laudatory about the people about whom he has written. The book would have been more spicy if he had undertaken an exercise—gentle of course—to refer to the warts of his interlocutors. Secondly, there could have been one or two chapters on his interaction with the general run of senior Indian politicians after he assumed his political incarnation. Third, the editors should have been more careful about the number of typos in the book. I also wish he had referred to the principled stand that P.N. Haksar took against the Emergency in 1975. One also wonders why the publishers did not include an index at the end of the book.

Heart to Heart, though pegged to personal interactions, has a delightful undercurrent of history and international politics. In many ways, Natwar should be a role model for his colleagues in the foreign and civil services, who would have had similar opportunities of meeting eminent persons during the course of their career. They too could write books like this one, to enrich both our history and literature.