Metaphor, analogy, circumlocution, we tried it all 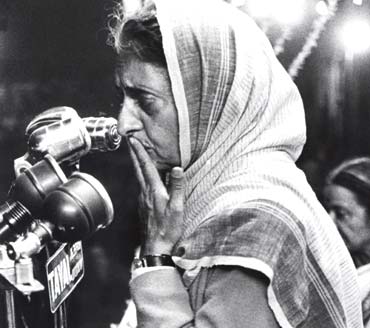 outlookindia.com
-0001-11-30T00:00:00+0553
Starting in 1956, when we drove overland to India from London, we have written "notes" during each of our 11 research years in India. Notes help us understand what is happening and clarify our thoughts about what has now become a second home. We were here in 1975-76, after Indira Gandhi had declared an Emergency. When we began writing "Jaipur Notes", our record of that period, neither we nor those who were designing the Emergency were very clear about what it should mean or where it should go. Would India, like so many "new nations", abandon democratic governance? When India said no to authoritarianism in the election of 1977, that was indeed a defining Indian experience.

Dissent (and in the circles in which we moved in Jaipur, Delhi and Calcutta, there was considerable dissent) was expressed in metaphors and analogies, circumlocutions and euphemisms, except when we spoke to old friends in private. The notes bear witness to the charged atmosphere and evasive media invented to negotiate it. Their tone of voice and language took account of the fact that they might be discovered, even though we used circuitous methods for spiriting them out of India. We wrote for a dull censor and a bright colleague. This is an abridged version:

October 8, 1975, Jaipur, India
Our somewhat circuitous approach to this year of research in India led via London and Delhi to Jaipur. The level of outrage with what is happening in India has diminished along the way. Outrage was highest in London, muted in Jaipur. We met with W.H. Morris-Jones, the most respected of the English political scientists working on India, and with a philosophically inclined set around Amartya Sen, who is a professor of economics at the London School of Economics. Sen and Morris-Jones had signed an English press advertisement in the London Times condemning the new political arrangements. Amartya had heard that 250 Delhi faculty had been arrested and their pensions and benefits and salaries affected. (One hundred and twenty-five were arrested, for four days or so, which considerably shook the Delhi academic community; their friends here say the story about benefits is not true.) Both Sen and Morris-Jones were sharply critical; Morris-Jones remarked on the deafening silence from scholars of India in the US and England.

At Amartya’s house, we had a brisk discussion with Eric Hobsbawm and W.G. Runciman from Cambridge, and Richard Jeffrey, a philosopher from Princeton. We took the position that India was likely to be a Louis Napoleon state, with middle-class notions of efficiency and effectiveness, and a happy civil service able to accomplish what had been much harder to accomplish under the populist conditions of the last few years. Whether the state would also succeed in its distributional intentions had yet to be seen. Sen confirmed this image, saying that it was his impression that the business community, at least the haute bourgeoisie, was not discontented, red tape having been reduced. Hobsbawm took the position that Louis Napoleon states are rather useful; on the other hand, liberalism had its good sides, since without public access to information, closed states are likely not to work very well.

...Among our academic friends in Delhi and Jaipur, the politics of Jawaharlal Nehru University is a lively topic. People expected that jnu would be very happy with the Emergency because of its Left proclivities. But jnu has a considerable Communist Party of India-Marxist component (one of India’s two principal Communist parties, it is independent of both Moscow and Peking), especially among the students, and unlike the Communist Party of India (Moscow-oriented and allied to Mrs Gandhi’s Congress), it is not supporting the Emergency. Some jnu students (we heard 64) were arrested, although most were quickly released. Even though faculty have not been arrested, a number have experienced unusual interest in their old tax returns on the part of the tax commissioner, requiring much trouble, many papers, and plenty of anxiety.

April 9, 1976
On March 18, we were scheduled to leave our residence in Jaipur for Calcutta, to give seminars at Shantiniketan and Presidency College. Before our departure, Lloyd was scheduled to participate in a seminar on a new book by Rajni Kothari, Footsteps Into the Future, at the University of Rajasthan. Other panelists were S.P. Varma, former chairman of the department, and an excellent political scientist (wise, prudent, and courageous—a quality the times allow one to discover); Daya Krishna, chairman of the philosophy department to whom the same adjectives are applicable; and Kothari himself. Over the seminar hung a certain palpable atmospherics of the kind that has plagued public events since the Emergency was declared. Whispering participants were trying to figure out whether the "Delhi observer" had come—a silent man of ominous connections to the Delhi establishment, who appears at important functions, and to whom we refer as "the Gauleiter". One of the participants gave a strong paper, "Freedom of Expression in Danger; the Case of Africa".

Kothari has taken some courageous positions in recent months. The January issue of Seminar carried an article by him, among other critical offerings, which led to talk in Delhi of the end of Seminar and led Kothari’s friends to worry about his future. (Seminar was closed down in the autumn and Kothari left the country.)

The content of the debate between him and Lloyd is of some interest, in view of the headline that appeared the next day, after we had left for Calcutta, in the Rajasthan Patrika—"American Professor Makes Anti-Indian Propaganda"—and of the resolution passed by a quickly created Student Council of the University of Rajasthan (there is none; it was dissolved), to the effect that American forces, in the forms of films and of an anti-Indian lecture by Professor Lloyd Rudolph, were penetrating the university; and furthermore 19 professors at the university (almost every respectable intellectual figure was on the list, including Varma and Daya Krishna) were cia agents and ought to be fired.

Lloyd said that Rajni’s book was rather too Manichaean, placing all virtue in the Third World, all vice in the major powers, and that a less dichotomised view seemed more appropriate. The point on which the sharpest difference arose concerned Kothari’s notion that the bureaucracy of the world constitutes a class, of which the Indian bureaucracy is a sub-sector. In none of the seminars did the Emergency come up.

In any case, we left for Calcutta, oblivious of the events behind us. Calcutta felt like a free country. The faculty were unintimidated. There was no Gauleiter. Delhi seemed very far away. (We found the same in South India. Political fear seems to diminish with distance from Delhi.)

We returned to Jaipur, to find that Annette, the 19-year-old German au pair, had sustained two visits by the government and the police. A police officer came by with a truck and two constables. He told Annette that she had to answer a series of questions about the Rudolphs, of which the most pregnant was: "Is it true that Professor L.I. Rudolph had a party at the Rambagh Palace Hotel on January 2, 1976, for retired army officers? If true, who was invited and what was the purpose?" Annette said the Rudolphs had had no parties at the Rambagh (ED: they could not afford it!). The policeman said, yes they did, I saw you there. No, said Annette, they didn’t and I wasn’t there.

The questions, we learned in retrospect, were asked on the floor of the Rajasthan legislature by Ramanand Agarwal, a CPI legislator who had asked similar questions in 1972 with respect to our Minnesota colleague, Richard Blue.

The visit shook Annette, who called one of our professorial friends, who called the wife of the Chief Secretary. Annette was not further harassed.

On the 22nd, the Chief Minister of Rajasthan responded to Mr Agarwal’s questions. He said that there were three Americans doing research: two Peace Corpsmen working on animal husbandry and one L.I. Rudolph working on the diary of Amar Singh, the third Thakur of Kanota. (Susanne also had a fellowship and a clearance. But there is something about India that sometimes makes women invisible.) He said he ought to clarify that all foreign scholars were cleared by the ministry of external affairs and by the ministry of education.

Meanwhile, back in the university, the police had paid some visits to find out more about the meeting with Kothari. The investigation offered an opportunity to the departmental faction inimical to Professor S.P. Varma and the chairman, Iqbal Narain. A political science colleague who hadn’t been at the meeting told the press that Lloyd Rudolph had made some remarks against Indira Gandhi in his discussion with Kothari. (He didn’t. We’ve been, if anything, too correct). Fortunately Daya Krishna, with a realpolitik wit that belied his contemplative, philosophical style, had recorded the session ("So the students can have the advantage of hearing the distinguished guests!"). Efforts were made to find out if Lloyd was associated with the Department of Political Science (he is not). If the CIA-anti-Indira stories could be made to float, and if the department had given us association, those facts could have been used against Narain and Varma, whose departmental enemies have tried for a good many years to discredit them. Both men have national reputations, do research and writing, and are widely respected.

Did we mention that Rajasthan Patrika said that the Rudolphs had "absconded" to Calcutta?

The Rudolphs are eminent American political scientists and co-authors of many books on India.

More from Lloyd I. Rudolph