Chaudhuri's writings record subtle variations on a more settled routine. The technique works because it saves history from the banality of a slogan. 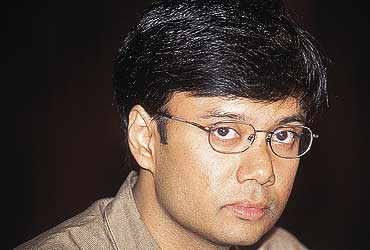 Real Time
By Amit Chaudhuri
Farrar, Straus and Giroux Pages: 182; $22
The opening story in this collection describes a young poet’s friendship with an older man, Mastermoshai. The first question that Mastermoshai asks the narrator, who was then still in his teens, is "Are you profoundly influenced by Eliot?"

The story is set in Calcutta. You feel that the literary passions this city with a colonial past breeds are already obsolete elsewhere. Yet, they inspire a romance which is real and productive. That is what the young poet feels too after the years have passed.

Amit Chaudhuri’s other stories in this debut collection, Real Time, also concern themselves with the conditions under which art is born or the circumstances in which artists live. The book’s closing story, for example, is about Mohanji, a gentle and gifted singer trained in classical Hindustani music. He makes a living by teaching affluent housewives in Bombay how to sing devotional bhajans and ghazals. Lately, Mohanji has been feeling ill. He believes he has an ulcer. He also suffers from tension. This tension comes "from constantly having to lie to the ladies he taught—white lies, flattery—and from not having a choice in the matter".

We get a clue here to Chaudhuri’s own art. He belongs to a very small group of Indian writers in English who are as good critics as they are storytellers. This skill at criticism is not simply the result of close reading—though that ability is in fine evidence in The Picador Book of Indian Writing that Chaudhuri has edited—but of a serious search for a reading public. His writing, both critical and fictional, subtly demonstrates for this absent public its most responsible function.

Fifteen short stories and a reminiscence-in-verse make up Real Time. Not all these pieces are as strong as the ones I have mentioned above. A real gem in the collection is the short story Real Time, which along with the story about Mohanji was first published in the British magazine, Granta. This elegantly-crafted story recounts an executive’s visit to a house in Calcutta where a shraaddh or memorial ceremony is being held. The ceremony is for a young, married woman who has committed suicide by jumping from the third-floor balcony of her parents’ house.

Death produces a great absence, but here, in the story, the absence has more to do with the fact that the visiting couple know very little about the suicide. They had learned of the death from an item in the newspaper. Grief remains remote. More than death, it is this distance that produces a blankness which, however, slowly gets filled with ordinariness, and even trivia. The narrative is so precise that it is with a tiny jolt that the reader realises that this inconsequential ordinariness is what we usually call life.

In Chaudhuri’s prose, history always happens elsewhere. It is like an earthquake in the heart of the earth. What the writing registers are only the tremors and sometimes the shock of falling buildings.

In early 1993, a short while after the demolition of the Babri Masjid and the riots that had followed, Chaudhuri had written a travel-essay about his return to India from Oxford. There he had described how the metal nameplates in the house where his father had lived in Bombay were now all blank. This had been done to protect the Muslims living in the building. "Small, accidental sensations, too small to be called incidents," he wrote, "told me I was now living in a slightly altered world."

Instead of huge, violent, or overwhelming changes, what Chaudhuri’s writings record are subtle variations on a more settled routine. The technique works because it saves history from the banality of a slogan. At the same time, it also carries the danger of slipping into a mannerism. Both the strength and on occasion the weakness are present in the stories included in Chaudhuri’s latest work, Real Time.