Eleven Bodies Against The Radcliffe Line 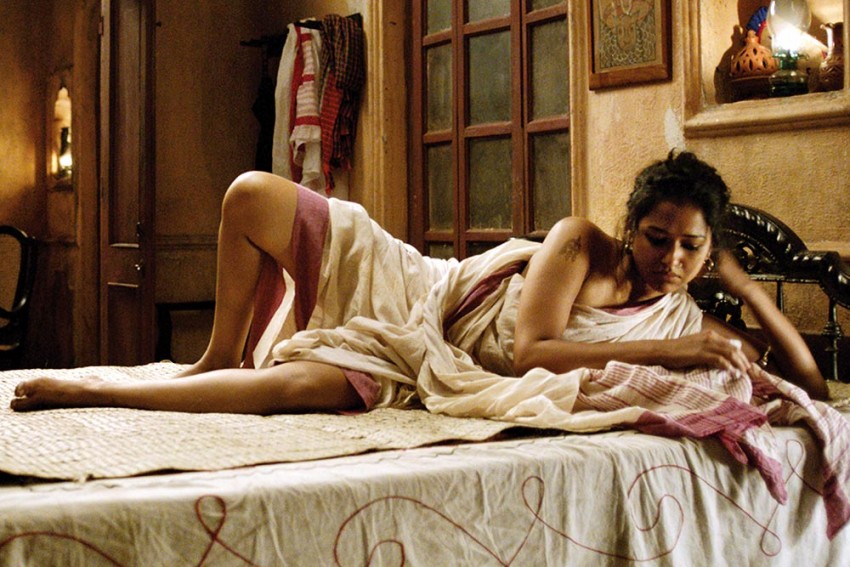 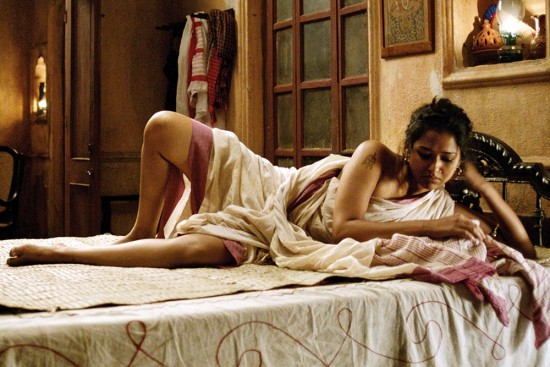 I remember watching Rajkahini at its star-studded premiere in Calcutta at a plush multiplex in one of the most popular malls last year. It was just before Durga Puja—a time of plenty and of infectious bonhomie that envelops the city like no other time. There was the flurry of photographers common to a red carpet event, with starry-eyed members of the Bengali upper middle-class furiously clicking selfies, cheek by jowl with the Toll­y­wood elite, their faces lit up with the pro­mise of a few, fleeting seconds of fame, and the chance of many likes on Facebook.

The film, as with every other film by National award-winning director Srijit Mukherji (he’s on his ninth film, since debuting in 2010 with Autograph, which revisited the Ray classic Nayak), had been much hyped ever since its hard-hitting trailer had created shock waves in social media—a moving saga of brutal deceit, unflinching patriotism and inhumane sexual oppression set against the backdrop of the Partition.

A story of a brothel set in the middle of nowhere, inhabited by a bunch of foul-mouthed, brazen prostitutes, are ordered to vacate a crumbling mansion they call their home, as it falls bang on the new India-East Pakistan border. The trailer ends on a rousing note, with Rituparna Sengupta, who essays the role of the madam, spurning officials of the two countries, saying that politics doesn’t decide their collective fate, as they are already shunned by society, yet are pleasure-givers to countless faceless men.  Realising the fact that a line will now run through the courtyard of their kotha, the girls erupt into laughter. The soundtrack of the film includes a rousing rendition of Tagore’s Bharata Bhagya Vidhata, sung by Bengal’s top musical talents. Going by the trailer, it was dubbed ‘feminist’. In the screening, a palpable, hushed silence falls over the audience during the first scene itself, as matronly women shudder and cover their eyes.

Rajkahini makes no apologies for its sheer grittiness—the opening scene takes place in a makeshift hospital where a distraught father is searching for his lost daughter. She, meanwhile, has been dumped near the medical camp after being violently gangraped in the horrific communal riots around Partition. Staring vacuously ahead, in a state of deep shock, the young girl is shown unresponsive to her father’s fervent pleas to react. Her only reaction, after the doctor instructs the ward boy to open the window, is to mechanically, and with painstaking slowness, tug at the strings of her pyjamas and pull it down, leaving the three men in the tent agape. Her father breaks down. The episode sets the pitch for the rest of the period drama—raw, real, and ravaged. 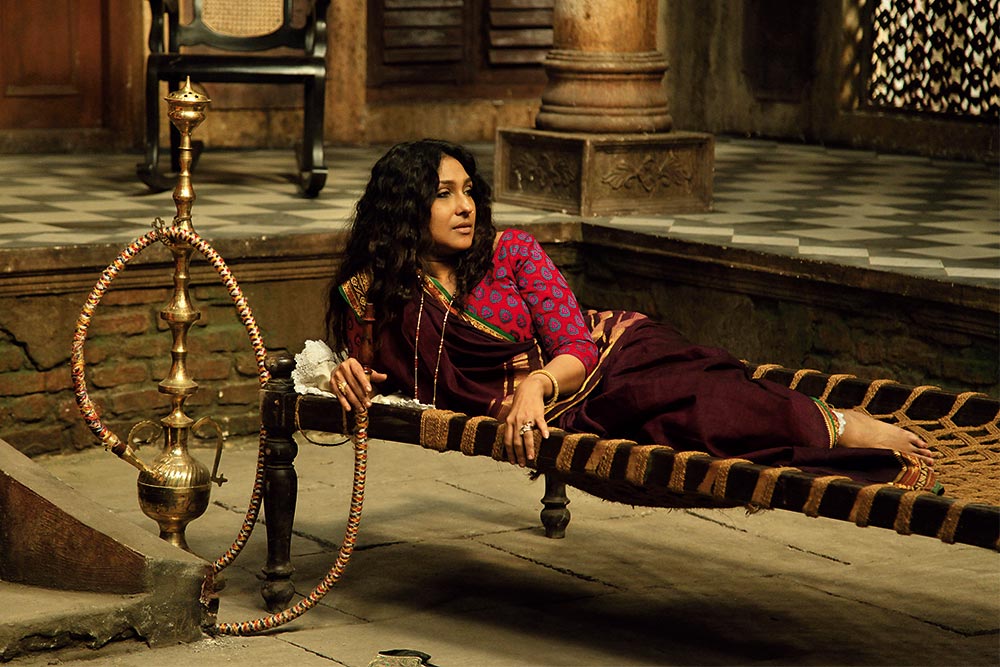 I catch up with Srijit, who has now shifted base to Mumbai and is in the throes of frenzied marketing and promotions for Rajkahini’s Bollywood remake, which is being produced by Mahesh Bhatt. Himself once regarded for films with sensitive portrayals of women, like Arth and Daddy, Bhatt has long since bitten the bait of commercial success—popular potboilers riding on a simple formula of chart-busting music, no-holds-barred physicality and talented newcomers who probably come cheap.

In his new home on fashionable Carter Road, I ask Srijit how he came up with the idea of Rajkahini, and the jarring contrast of a woman’s sexuality with hollow male pride and savage sexual crimes. How the whorehouse is symbo­lic of a deeper social marginalisation; how, in a sense, a woman’s body is never hers to begin with.

“The story of Rajkahini dates back to the close of 2013, when I started reading Manto and Chughtai. The film is my tribute to both. I was deeply moved by Manto, his worldview and the way he portrayed the Partition not through the narrow prism of Lutyens’s Delhi or the corridors of power in Karachi, but through the eyes of the shadow people, so to speak—beggars, clerks, prostitutes. So, while both of them were the initial trigger, the central idea fructified when I went on to read more academic literature on Partition dealing specifically with riots, clashes and the political games being played in Delhi, by authors ranging from Jaya Chatterjee, Urvashi Butalia, Suvir Kaul, Mushirul Hasan and Haimanti Roy,” says Srijit.

From this period of deep study, Srijit realised that the Partition was undoubtedly the subcontinent’s darkest hour. Also, what struck a deep chord with him was the way both nations treated women. Since they were primarily viewed as a deeply cherished symbol of honour, women were the first targets too—to be brutally tortured, violated, raped, and murdered. “So I thought, why not focus on the most marginalised? From that originated the idea of talking about women in a brothel who are seldom a part of any history book. Another conclusion was that when Cyril Radcliffe drew the line dividing the country, he had no idea of topography, demographics or socioeconomic divisions; his driving principle was the ratio of majority to minority, based on narrow religious boundaries. Naturally this random line passed through jungles, hills, rivers and sometimes, through villages and even houses. I used this as the single most compelling theme of Rajkahini, where the brothel is but a metaphor for the country,” adds Srijit. 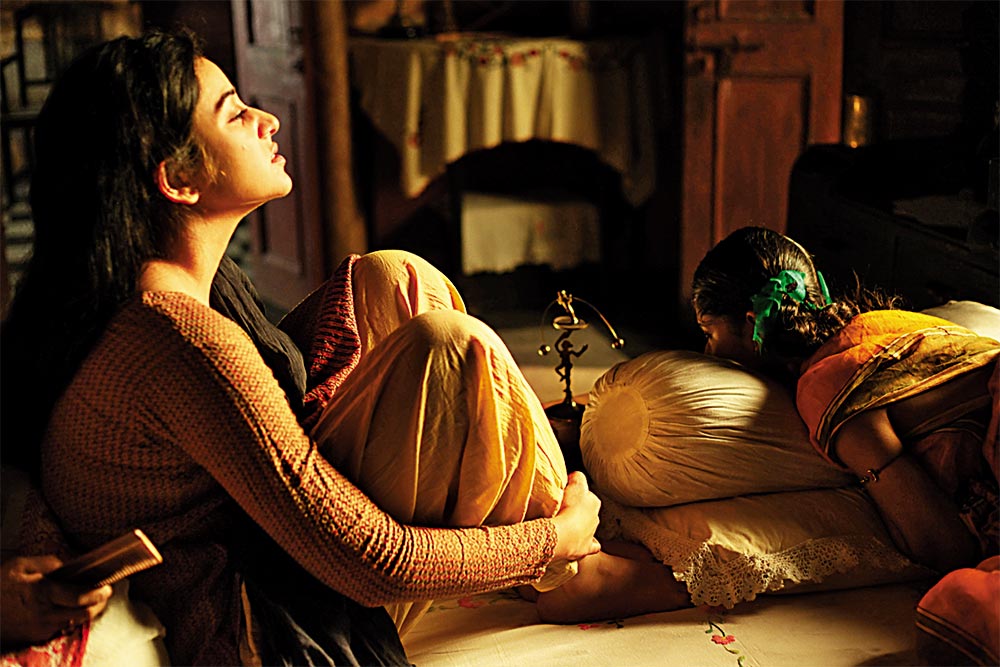 Ridhima Ghosh in a scene. Rajkahini, which stunned Bengali audiences, is being remade in Hindi.

In his reaction, Srijit speaks of the liberties he deems critical to artistic perfection. “The burst of sexuality on screen is a mirror of the burst of sexuality in our society. Also, I am more concerned about the development of that language, its new physical expressions, rather than judging what is good/artistic and what is cheap/dirty. For the language of new-age cinema to develop, we need more breathing space, and that to me is the quest,” he says.

Srijit, whose personal irreverence translates into cinematic arrogance, cites the example of his second film, Baishey Srabon, after his hugely popular debut Autograph, which he regards a “safe crowd pleaser”. It’s the story of a self-destructive cop, played by Prosenjit Chatt­erjee, who, as Srijit aptly points out, was until then, at least in his arthouse avatar, seen as a “mild-mannered hero reared in the Rituparno Ghosh school of acting and symbolising core family values”. In Baishey Srabon, he transformed into a brooding, melancholic, grey character who swore frequently and filthily. “Profanity is common in our lives; like the sex in Rajkahini was contextualised, so was a foul-mouthed Prosenjit, a debau­ched cop who wouldn’t abuse criminals in Shakespearean English!” says Srijit. “I didn’t sanitise the film, and was aware of the risks we took by pushing the envelope where the screenplay went. It was honest to the edginess and grittiness of the plot and we hit bull’s eye at the box-office. Today, Baishey Srabon is a cult film.”

Perhaps, the same logic was applied for the in-your-face sexuality of Rajkahini, which, by Srijit’s own admission, was offensive to an elderly, more conservative section of cine-goers, used to safer, more suggestive portrayals of female sexuality. “The cruelty, violence and bestiality of the setting had to be projected as it is, sans any aesthetic sugarcoating. Also, in a brothel, there’re not going to be pretty, white bedsheets, poetic lovemaking or soft focus shots—the molestation and the crude sex scenes actually were more watered down compared to what really happened back then and honestly, I wasn’t intimidated by the Censor Board as well,” says Srijit, quickly drawing an undeniable parallel. “Look at what happened during the Holocaust. Today, every kid in Germany is told the horrible truth, whereas, with Partition, which was our Holocaust, there is a need to constantly pussyfoot. I have been unapologetic to the context and hones­tly, this was much more than earning a feminist brownie point.”

I couldn’t help but probe if the maverick director was a bit unnerved by a possible ‘feminist’ nametag, the constant need to justify his unconventional characters, as well as the need to defend his brand of cinema that walks a tight line between populism and snobbery? Like in the not so commercially successful Nirbaak, inspired by Srijit’s visit to the Dali museum in Orlando, Florida, where he was bowled over by the anthropomorphic nature of the Spanish painter’s works. Nirbaak expressed the nature of love through silence, and in the guise of being experimentally niche once again shook the viewers out of their comfort zone, by suggesting kinky sex and self-pleasure—a tree masturbating and ejaculating symbolically by shedding its fresh blooms at the sight of its muse sitting under its shaded confines is one. Then there is buxom Sushmita Sen in her Tollywood debut; veteran Bengali actor-director Anjan Dutt essaying the role of a lonely, Anglo-Indian bachelor who practises onanism in full public view; a pet dog obsessed with his male master and fantasising about turning into a jealous, venomous canine lover when he gets married and, finally, a necrophiliac morgue worker who gets married to a dead body. 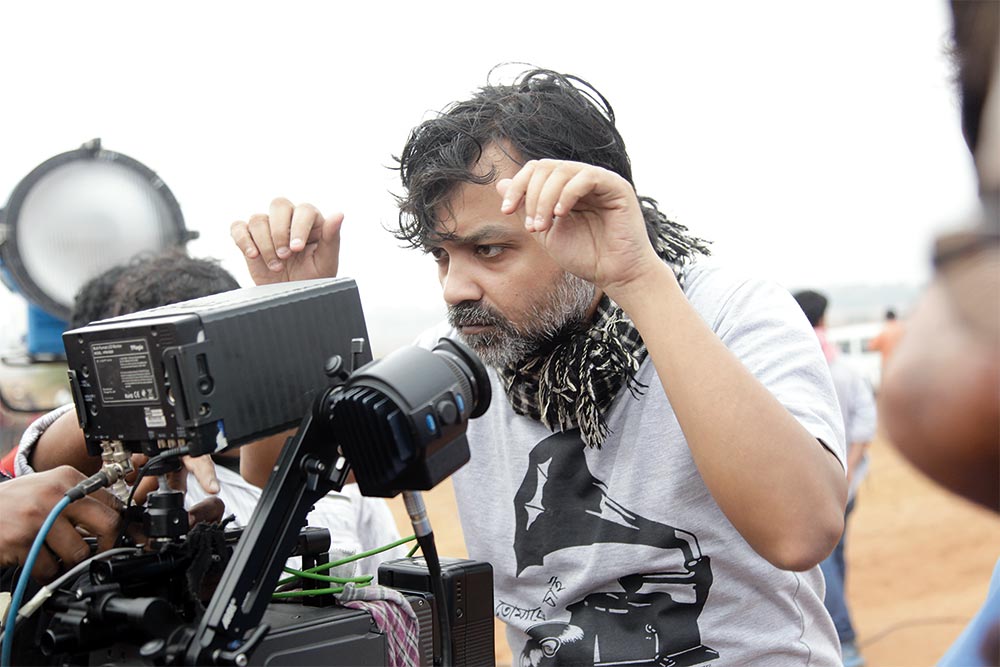 Srijit Mukherji brooks no meddling in his work

“The good thing is that, like it or not, people recognised it as a different kind of an effort, a different attempt at storytelling and a step forward for Bengali cinema,” Srijit says justifyingly about Nirbaak, a film I personally found jarringly bizarre. Perhaps, to be esoteric was his intention.

“I am a story-teller and my main purpose is to be true to my characters and context.... I am scared of any particular ‘ism’, because once you get bracketed, you are inevitably stereotyped and the purity of your work is then measured against this stringent yardstick,” argues Srijit in his characteristically nonchalant way.

Srijit is also quick to emphasise how he convinced the Censor Board of the need to portray sex and violence as crudely as it was in the final cut of Rajkahini. “I was still recovering from a major accident and went straight out of the hospital, on my crutches still, to meet the Censor Board people. In an hour-and-a-half, I had convinced them about the larger purpose.” At a mention of him being plain lucky, in an age when the Censor Board plays spoilsport with even big budget B-town flicks, he points out, “My film Hemlock Society dealt with suicide and despite being pro-life, was handed an adult certification, with some provocative lines about the army rule in Manipur being slashed.”

With Rajkahini being remade in Hindi and slated for a March 2017 release—Vidya Balan reprises Rituparna’s Begum Jaan in the lead—is Srijit playing to the galleries, given the Hindi audience is a different animal? “The storyline is being overhauled, as I don’t like the monotony and the baggage of my debut Hindi feature being a remake. We’ve toned down the historicity, but are probing more into the back-stories and the inter-personal relationships of the women in the brothel. Also, Bollywood is also taking risks with movies like Ishqiya, Dedh Ishqiya, Dirty Picture, Kahaani and Queen that are unabashed in exploring the female psyche and are pushing sex­ual boundaries. Also, you are no one to categorise me! I make films on my own terms.”

But, even if audiences have played along till now, what about negotiating the same space with producers, known to be the ‘asli baap’ of directors and who are known to call the shots onscreen? “I have delivered,” declares Srijit confidently, even a bit pompously. He gathers his thoughts for a while, then adds matter-of-factly, “I have given seven super-hits and have seven national awards. Maybe, it’s the advantage of being successful...I am given a free hand and don’t tolerate interference in my creative space. Apart from family tear-jerkers and franchises like the Byomkesh detective series, only my films have got the cash registers ringing.”

However, the usually outspoken director maintains a diplomatic silence about his current producer, Mahesh Bhatt. His next is a children’s adventure film featuring the popular ‘Kakababu’ character created by Bengali author Sunil Gango­pa­dhyay. Paharchuray Aatonko will be in 3D. 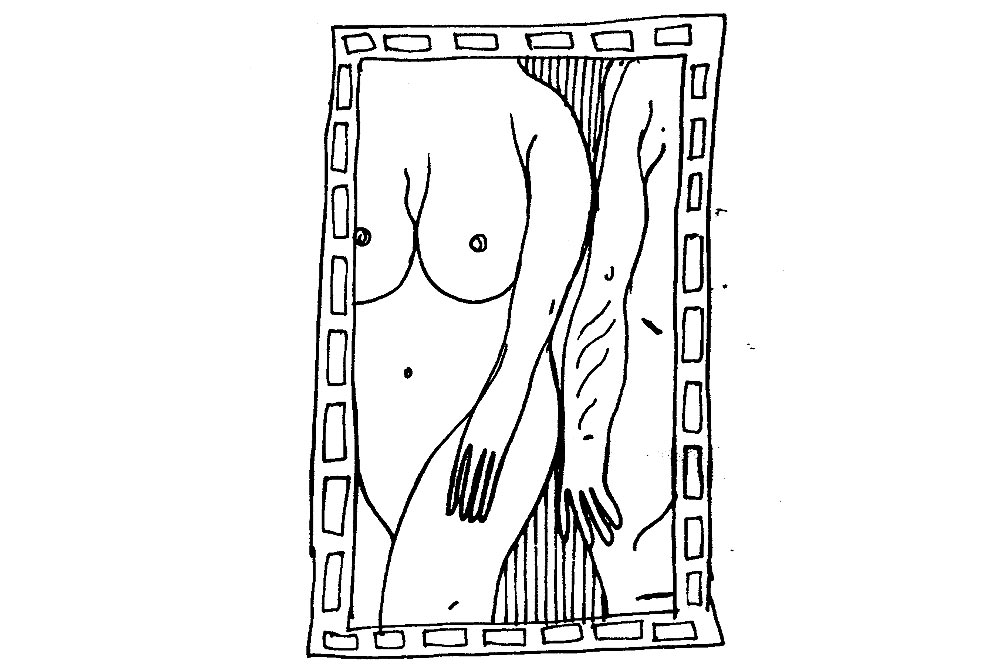 What Women Want: An Open Online Closet Of Sex Toys