Islamabad is chary of India's ties with Kabul, so the US steps in 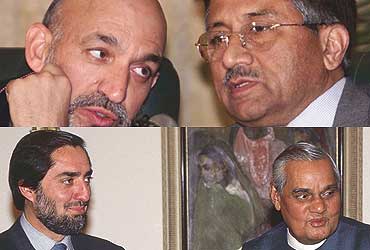 outlookindia.com
-0001-11-30T00:00:00+0553
As Afghanistan rises again from the wreckage of relentless meddling by Pakistan, indiscriminate funding of Wahabi Islam by Saudi Arabia and Iran's attempts to counter the tide, President Hamid Karzai's nervousness about his immediate neighbourhood is understandable. Competing interests tore Afghanistan apart under the five years of Taliban rule. India was only nominally in the picture then but as Afghanistan becomes a viable member of the world community again, New Delhi wants to play a role in consonance with its interests. It has been giving Kabul humanitarian aid, having spent $35 million of its total commitment of $100 million, and rapidly winning friends and influencing people.

But late last month the US delivered a message to India not to rush too fast, too soon into the wilds of Afghanistan as it was causing nervousness in some capitals. Actually, in just one capital—Islamabad. A similar message was given to Pakistan and the Americans urged both India and Pakistan not to make Afghanistan a new theatre for their historic competition.

Tempers flared awhile as diplomats disputed whether the US had handed a demarche—a more formal communication between two governments often requesting action. Officials at the external affairs ministry in Delhi denied it was a demarche and a US State Department spokesman declined to characterise the communication, hoping to put a lid on it all. During his visit to Washington in early December, National Security Advisor Brajesh Mishra announced, "The issue is behind us."

Whatever the form, it is the content of the message that raises concern. Is the US trying to limit India's role as it did in the '90s when the State Department assiduously kept New Delhi out of peace talks on Afghanistan, mainly at Pakistan's bidding? Or is the US trying to remove the "distraction" of an Indo-Pak side-show from the larger objective of hunting Al Qaeda?

The Americans say it is Karzai who is nervous about the Pakistanis getting all hot under the collar because India is all too visible in Afghanistan's arid landscape. Opening four consulates in less than a year has to be a record for India. The last two—in Jalalabad and Kandahar—opened on December 16; those in Mazar-e-Sharif and Herat have been functioning since August. The Afghans say they welcome India, that it is the Americans who are "absolutely upset" about the "nuclear-armed neighbours" competing in the bleeding, wounded Afghanistan and thwarting stability. Indian diplomats claim it is the Pakistanis who are feeding their paranoid worldview to the new Afghan government and the Americans.

But the Karzai government, although beholden to the Americans for security and upkeep, knows where its interests lie. Painfully aware that US presence can't be guaranteed beyond the capture of Osama bin Laden, it is making overtures to friendly countries that want to see a unified, strong Afghanistan. It has shown a streak of independence by inviting New Delhi over Pakistani objections and American hand-wringing to The Conference on Good Neighbourly Relations on December 22 in Kabul where Afghanistan's six immediate neighbours—Pakistan, China, Iran, Turkmenistan, Uzbekistan and Tajikistan—will pledge non-interference. Representatives from India, the EU, the G8 and the Organisation of Islamic Conference will sit at the table in their various roles as observers, guarantors and monitors.

Haroon Amin, deputy chief of mission of the Afghan embassy in Washington, says India and Afghanistan share "historic and civilisational" ties and these would only broaden because of the helpful role India has played since the scattering of the Taliban into the mountains". Pakistan should not see this as a threat. Its fears about Afghan-India relations are ill-founded," he says flatly.India's formal presence at the Kabul meeting is a measure of the dramatic distance it has travelled since the last decade when it was denied a voice because of a de facto Pakistani veto exercised through the Americans.

But even now Karzai, no matter how he may feel privately, can't afford to tell Pakistan and the other erstwhile godfathers of the various warlords to lay off. Instead, he hopes to coax his neighbours not to play the Great Game any more at his country's expense, precisely the theme of the December 22 conference.

The Americans still tend to listen to Pakistani objections on India, partly from an age-old tendency to equate the two—which keeps surfacing in the nitty-gritty of diplomacy—and partly from bureaucratic resistance to ceding India too much ground. Some of the old mindset is still there. For example, a US State Department official confidently announced that India hadn't been invited to the Kabul conference, assuming the patterns of the past. He acknowledged that the India-Pakistan tussle was a source of concern for the Americans. "The prime objective of the US is to lessen the competition among rival powers because it builds factionalism in Afghanistan. A lot of Afghans are suspicious of Pakistan, Iran and Russia. India can play a very positive role but the history of India and Pakistan is to get into a situation. It is what happens, always. It is understandable but it has a negative impact," he said.

American analysts insist that even though the US told both India and Pakistan to go slow in Afghanistan, the message was aimed more at Islamabad. Dennis Kux, a former US diplomat and a South Asia expert, explained, "The US is more concerned that Pakistan should curb its activities in Afghanistan. We are trying to keep them out. We feel strongly that the Pakistanis should shut down shop and stay shut." He, however, added that an array of Indian consulates, which no doubt will have "eyes and ears", will become a centre of activity and encourage Pakistan to do the same. Barnett Rubin, an Afghanistan scholar, echoed the sentiment: "The problem is that the current Indian representation in Afghanistan is looking at its job more or less as stopping Pakistan. Telling India to stay out is a condition for the much more important goal of keeping Pakistan from interfering."

Indian diplomats counter that to see the Afghan issue through the lens of Indo-Pak rivalry is outdated. "What we are doing is with the full knowledge and agreement of the Afghan government. You open consulates with the concurrence of the host government, not otherwise. We need consulates to coordinate the teams of people for the humanitarian work we are doing. How can you undertake large projects without a consulate?" asked a senior Indian diplomat. "India is among those who have done the most for rebuilding and we don't even have a dog in this fight, so to say. We have always stood for a unified Afghanistan going back all the way to the king's time."

In the past, the Americans barely listened to India's warnings on terror camps inside Afghanistan or if they did, they took no perceptible action, leaving it to Pakistani and Saudi management. India was gratuitously kept out even as an observer from the infamous "six plus two" talks by American clout and Pakistani insistence. But the group, made of Afghanistan's immediate neighbours and US and Russia, failed to craft peace among the mujahideen factions and watched as the Taliban took over. It still meets under the UN umbrella although the Afghan government considers it "obsolete".

Instead, a larger group of 21 countries made of the six neighbours and 15 donors has been meeting at the UN where Pakistan can no longer "veto" India's presence. Times have changed and today India has a seat at the table.It participated in the 'Ad Hoc Meeting on Afghanistan' on September 13 this year which was also attended by Secretary of State Colin Powell. While Washington could no longer ignore New Delhi, it didn't actively push for India's inclusion. As Afghanistan's permanent representative to the UN A.G. Farhadi put it, "What is important for Afghanistan is to have India's assistance recognised by everyone."