The uncontrollable laughter, the prose, the acclaim, the silent communion... 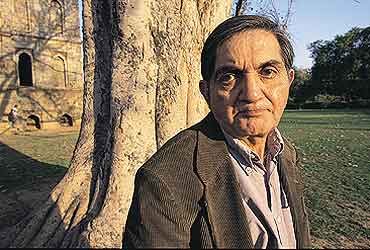 In most of the letters I mailed you while you were still here, I addressed you as 'Nirbal' or 'Nirmool' or 'Normal', playing with your first name in order to tease as well as amuse you by drawing your attention to traits you tended to conceal even from yourself: vulnerability, rootlessness, normality. Now that you are no more, I'd rather play fondly with my memories of you and our deep and sometimes difficult friendship.

So, let me start with our early angst-ridden years in dear, dusty Delhi 55 years ago. We were both unsettled then, I more than you; we had both started to write and publish stories of whose literary worth we were mostly unsure; we used to meet and loaf and laugh together quite frequently; for a while we even privately tutored the same girl and often compared notes about our tutorial torments.

My most enduring memory of that phase is our fits of uncontrollably absurd laughter in the midst of our unending conversations and discussions about life, loneliness, literature, love, and death. We had our differences on each of these momentous issues and many others but were able to drown those in our sometimes mirthless laughter. That first phase culminated in our first published books—your wonderful collection of stories, Parindey, brought out by the People's Publishing House, and my novel Uska Bachpan, published by Saraswati Press, both books with a cover designed by Ram Kumar.

During the next phase—we were still in our youth—you were at Prague learning the Czech language and translating Czech writers while I was at Harvard, getting my PhD on Henry James. I don't remember the year I stayed in Prague with you on my way to America but it was a couple of years before the Soviet tanks destroyed the burgeoning Prague Spring. During my few days there, we walked and talked and drank beer and, of course, laughed. You were then working on your first novel, Veh Din, which I later translated into English.

When you came back to Delhi, or perhaps before that, I moved to Chandigarh to teach at the university there. During those years you published Veh Din which along with your earlier Parindey brought you great and richly deserved acclaim. I succeeded in sublimating my envy through a candid admission of it. You had struck new notes in Hindi, plumbed new depths, broken new ground. Your forte was your lyrical style and your incisive insights. You created an atmosphere that was often wistfully haunting. You polished your sentences with the patience of a meticulous wordsmith. I had some reservations about what I termed as your proclivity for romantic sentimentality but, at your best, you succeeded in getting away with it. During those years you were often berated by your detractors for your 'foreignness' or 'un-Indianness' but even your adversaries conceded to you your artistic and intellectual rigour.

In 1966, I drifted off to America where I remained for the next 17 years with infrequent visits to Delhi during which we tried to recreate the intimate hilarities of our youth but with little success. We had not drifted apart but our mutual ambivalence, which is always there between close friends, had grown, and we failed to laugh it out. Your stature as a writer had grown at a steady pace but, happily, you were still not an integral part of the literary establishment. Apart from several collections of stories and three more novels, you had published a lot of non-fiction including two luminous travelogues—Cheeron Pe Chandni and Har Barish Mein—and a number of controversially seminal essays.

A few years after my repatriation to Delhi in 1983, you started getting numerous awards and rewards; you also started getting translated into English and other foreign languages such as German and French. You became popular as a speaker and a public figure. You almost became a celebrity. I was quietly critical of some of your public utterances; I was less quietly apprehensive of the bad influence of the adulation you were getting; but I continued to admire you for your resistance to corruption, your principled polemics, and your essential fidelity to your Muse. During these years of our growing old in Delhi, we were both aware of a distance between us. We found we could not talk about each other's work without mutual unease and even annoyance, so we stopped talking. But we continued to remain the intensest if not the 'best' of friends. During your last phase, it seemed to me, you had become a little self-righteous and pompous; I think you were aware of my friendly disapproval of your new attitudes.

The last year or so of your rich and productive life was riddled with physical problems. You endured your ordeal with an admirable fortitude and continued to rage nobly against the dying of the light. During my last couple of hours with you at your bedside just 10 days before the end, we had moments of tender closeness, nostalgic remembrance of times past, silent communion—all shadowed somewhat by a sense of the ending. And now that you are no more, I treasure that last session with you dear Nirmal and feel grateful and blessed for it. You will continue to live in your great stories, your novel Lal Teen Ki Chhat, your fine prose, and graceful presence of your absence.

Bring Your Own Referee