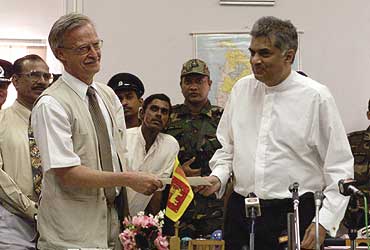 outlookindia.com
-0001-11-30T00:00:00+0553
Just at the time Sri Lankans began to demonstrate robust optimism about their future, President Chandrika Kumaratunga gratuitously stepped in to take the fizz out of their cautious celebration. Last week's public row between her and Prime Minister Ranil Wickremesinghe not only soured the public jubilation over the signing of the ceasefire agreement between the Lankan government and the LTTE but also appeared to signal an end to the overtly civilised cohabitation between the two leaders.

Guided by her animus against the PM, and the need to shore her Sri Lanka Freedom Party's prospects in the local government election, Kumaratunga made some disconcerting noises against the peace process, pricking the hopes of those eager to see an end to the nearly two-decade-long strife. As foreign powers worked the diplomatic channels and the intelligentsia at home rallied behind Wickremesinghe, the President quickly watered down her opposition, claiming she only had reservations about some of the clauses of the ceasefire.

But first, the ceasefire accord that came into effect on the midnight of February 23. Under the pact, the armed forces and the rebels would be separated by a 500-metre no man's land and both sides vowed to cease all "offensive operations". Unarmed rebel cadres can undertake political activity in government-controlled areas, and the navy can intercept any LTTE ships ferrying arms. Either side has to give a two-week notice before retracting their agreement.

This week, observers from four Nordic nations would be on the ground and naval ships to ensure the two sides adhere to the deal and sort out any violation. The next step will see the two agree on an interim arrangement to administer the Tamil majority areas of the northern and eastern provinces. The LTTE's political wing is expected to contest elections for such an interim body.

No wonder the agreement won widespread support from the local and international community. Says Loganathan Kethishwaran, head of the Conflict and Peace unit at Colombo's Center for Policy Alternatives, "There is a tremendous sense of relief that the ceasefire has been formalised. It is also a positive development that the world community has with one voice acclaimed the signing of the agreement. This is a signal that both the government and the LTTE are now under close international scrutiny."

But within hours of the agreement being signed, Kumaratunga issued a statement lambasting the prime minister for not obtaining a prior cabinet approval for the ceasefire accord and informing her about it only after Velupillai Prabhakaran, the LTTE leader, had signed it. Accusing Wickremesinghe of adopting "improper and undemocratic procedure", Kumaratunga fired a warning shot through a statement her secretariat issued: "The President has reminded the Prime Minister of the previous formal communication sent to him by her, wherein she had informed him of the constitutional authority of the President as the executive head of state, the government and the cabinet, with regard to all matters of war and peace and those affecting the sovereignty, territorial integrity of the state and the security of all her citizens."

Wickremesinghe's riposte was sharp: "The President was kept informed of developments by both me and the Norwegians. The cabinet was briefed on two occasions. The President did not attend either." Never one to let sleeping dogs lie, Kumaratunga, in an address at a local government election rally in Colombo's suburbs, declared, "I can stop Wickremesinghe's agreement with one letter to the army commander." (Later in the week she however denied the statement.)

The President's threat to abrogate the ceasefire brought an immediate international response. India led the way in informing the President of its concern through diplomatic channels; Washington, Oslo and London followed suit.The last thing the President can afford now is to lose international support. Soon after winning the December 5 general elections, a powerful section of the ruling party, the United National Party, wanted to force Kumaratunga out of office. Then the international community intervened and persuaded the PM to concentrate on the peace process rather than get sidetracked by his battle with the President.

Most agree Kumaratunga's outburst could hasten the confrontation many had considered inevitable. "In fact, the surprise is that it took this long," says Victor Ivan, editor of the Sinhala weekly Ravaya. But the conflict could destabilise the country and even derail the peace process. For, in the existing constitutional arrangement, the President has immense powers while parliament controls finance and passes legislation. Says Paikiasothy Saravanamuttu, executive director at the Center for Policy Alternatives, "It will not be easy to topple or sideline the President. A direct confrontation at this time would be detrimental to the peace process because it would detract attention from it and, more dangerously, people may not think it would last if there is no consensus underpinning it."

The President's belligerence has also been guided by the JVP's campaign against the peace process. With dedicated cadres who had launched two abortive armed uprisings in the '70s and '80s, the JVP has the ability to launch a powerful grassroots movement against the accord. This could very well eat into the votes of Kumaratunga's Sri Lanka Freedom Party, the largest Sinhala nationalist party, in the local government election. In other words, it only makes political sense for her to play upon the insecurities of the hardline Sinhala nationalist.

The PM is unperturbed: "The local government elections should concentrate on local issues. The final solution (anyway) will be put to a referendum so that the people can take a decision."

In the final analysis, the agreement may have silenced the guns in the north and east of the island but has only sent soaring the political temperature in the south.

Who Came The Closest?