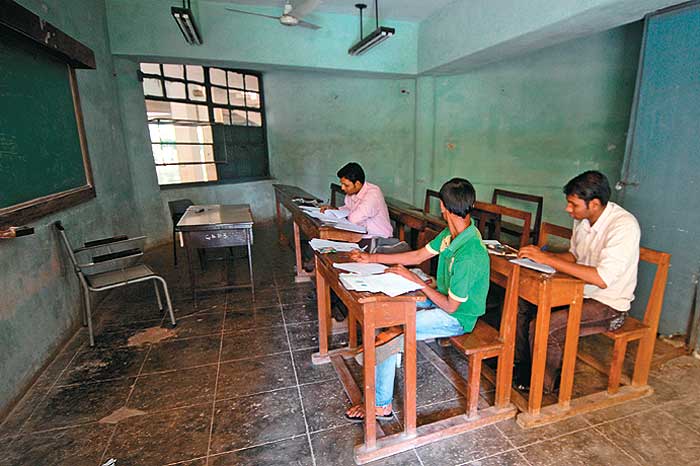 The story of Gustad Noble, the protagonist in Rohinton Mistry’s Such a Long Journey, ends with Noble pulling black paper masking (mandatory during the 1971 war) off the ventilators and window panes of his house. In Mumbai University, where the novel was controversially withdrawn from the second year Bachelor of Arts curriculum, the metaphor was telling: dark days loom ahead.

The story about the book withdrawal has done the rounds—collegian Aditya Thackeray chances upon passages that he found “derogatory” to grandfather Bal Thackeray and demands its withdrawal; a motley group of young Shiv Sainiks torch copies of the book at the varsity gates; vice-chancellor Dr Rajan Welukar, using emergency powers vested in him, withdraws the book within 24 hours.

It was a departure from all norms. Emergency powers had been used for the first time in the university’s 153-year history, to pull a book out of syllabus 10 years after it was approved and had been taught. Never before had a V-C taken an academic decision without approval from the academic council. Never before had a student expressed his displeasure over a textbook and a vice-chancellor bent over backwards to humour him. Mumbai’s civil society, for once, was enraged.

The issue, however, is not limited to the withdrawal of Mistry’s book. The repugnant episode is symptomatic of a larger malaise that afflicts the university where standards have seen a consistent decline, where academic pursuit is secondary to administrative chores and meaningless rankings, where research and ideation, excellence and merit are but incidental. Where even V-Cs are often political appointees. Dr Aroon Tikekar, historian and author of The Cloister’s Pale—A Biography of the Mumbai University, points out, “The institution has been a victim of bureaucratic and political interference, resulting in a succession of progressively worse vice-chancellors.” He rates Dr Welukar at the bottom of the heap.

Over the last decade or so, the “total rot” is reflected in gradual markers. The university expanded to have 670 colleges affiliated with over 6.5 lakh students graduating every year, but pure academic departments shut down while self-financed courses—which fed the job market but had little academic worth—began to be encouraged. Entrance standards to the self-financed courses were dropped to augment student strength; higher numbers meant more revenue. “The chairman of one board of studies would impose himself as a lecturer in many colleges and students from these colleges would generally top the university merit list,” says a former department head.

Then the number of doctoral students has galloped with hardly any addition to the knowledge pool of a subject. In the ’07-08 session, the university awarded 502 PhDs—52 in arts and 272 in science. “Where is all this research, where is it discussed, who cites it?” asks Dr Tikekar. Many micro-research topics are approved and there are hundreds of PhD theses piling up. With Dr Welukar as V-C, academics fear that PhD standards will slip further. One of his earliest decisions was to tamper with guidelines for admitting PhD students; this was to facilitate Rajesh Tope’s candidature, MoS for education and an education baron himself.

Welukar’s appointment was in “violation” of UGC guidelines. By qualification, he was at best a grade lecturer.

Meanwhile, though there’s been a serious depletion in faculty, positions have been lying vacant for months. “In my department, five out of 11 positions are vacant and two professors are due to retire. How can I organise innovative programmes, offer interesting electives, hold seminars?” asks a department head. If all posts are filled, at least 4-5 professors will be of eminent stature who set the tone in that department; which hasn’t been the case for some time now, say department heads. “The varsity should promote argument, debate, research, independent thought. This doesn’t happen anymore...the book withdrawal was a classic example,” says Neeraj Hatekar, senior faculty, economics department.

English professor Usha Subramaniam remarks, “The way the book has been erased from the memory of teachers and students, it’s as if it never existed. Some English departments say they aren’t teaching the book. Do I have to teach it to realise the consequences of not being allowed to teach it? Is this the beginning of the end of freedom of thought here?” Adds Dr Abhay Pethe, director, economics department: “The V-C isn’t a literary figure to discuss the merits of the book.”

Indeed, Dr Welukar’s appointment as V-C this July was itself ridden with controversy. In a dubious first, his appointment was challenged in the Bombay High Court through two pils and a writ filed by Dr A.D. Sawant, former pro vice-chancellor and a contender for the V-C’s post in Mumbai University. “People who have political patronage become V-Cs. That’s at the root of all our problems,” says a faculty member and member of the University of Mumbai Academic Staff Association (UMASA).

The post had been lying vacant since September last year. Two search panels later, Dr Welukar was chosen but, the writ states, his appointment “was in outright violation of rules” laid down in the University Grants Commission (UGC) guidelines and Maharashtra University Act, 1994. By the requirements, Dr Welukar would, at best, be a “selection grade lecturer” in Mumbai University; the vice-chancellor is supposed to be above the pro vice-chancellor, principals and deans in qualifications and position.

Dr Welukar, a doctorate in statistics, was former V-C of an open university (not considered highly academic) and director of the Sydenham Institute of Management Studies. His publications in peer review journals, it has been found, are deemed less than publication-worthy. “We were never under the illusion that this V-C is an academic. His appointment reflects the malaise,” says a faculty member. “Given Dr Welukar’s academic stature, he cannot appoint a pro V-C or registrar; prescribed qualifications for those posts are higher than what he possesses,” points out Dr Tikekar. “It’s sad...for an institution that boasts of alumni like Dr B.R. Ambedkar, R.G. Bhandarkar and M.G. Ranade.”

Outlook sought out the V-C for three days. When he finally responded, he said, “This book issue is now over, your magazine should not be writing about it.” When politely told that this was an editorial decision, he said, “I can respond on two conditions.” First, that he is shown what others have spoken about him and the university. Since this was not possible, we offered to read back his quotes, which he refused. The second condition was that he would only talk face-to-face, on Friday evening, well past our deadline. His parting shot: “You cannot say in the article that the V-C did not respond. I have spoken to you.” Sure, sir.

Bounce In Her Steps