Not just Hindu raj, Ambedkar opposed every argument for Partition as well 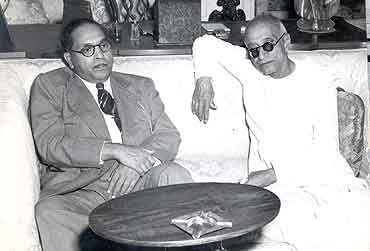 Amid the heat generated by the Muslim League's Lahore resolution on Pakistan and the extreme reactions across the subcontinent, the sole dispassionate voice was that of Dr B.R. Ambedkar. Pakistan or Partition of India (1940), his full-length book, became a reference treatise for all those engaged with the issue, including the main dramatis persona, M.A. Jinnah.

For others, however, it remained unduly controversial. The book was such that any casual or motivated reader could easily pick up stray pieces to support his own hypothesis. Hence, many distortions are in vogue but the commonplace impression is that Ambedkar supported Partition. On the contrary, he demolished all arguments for the creation of Pakistan.

Admitting the communal antagonism between Hindus and Muslims, he demonstrated that it could not be a valid reason for a partition of the country. With examples of Canada, South Africa and Switzerland, where antagonistic communities lived amicably under a single Constitution, he dismissed the inevitability of Pakistan merely on the grounds of a communal divide.

The two-nation theory as the basis for Pakistan was also refuted by Ambedkar. While noting that Muslims were advancing from the state of community to that of a nation, he contended that it did not necessarily constitute the basis for Pakistan. Even if the Muslims were assumed to be a nation, it did not warrant a Pakistan since India had not yet lost its 'organic filaments'.

While admitting that India too was not a nation, he disagreed with those including Jinnah who thought that India could not become one. Those who argued for Partition, he wrote, were guided by colonialist writers who emphasised differences between people and ignored the forces that bound them together.

Ambedkar also thought the Muslim apprehension that Swaraj would become a Hindu raj untenable because the Muslims had already reconciled to living in the more rabid Hindu raj sustained by Hindu princes against whom the Muslim League had never raised any objection. He did not see much substance in the political objection of the Muslims that Hindu society was undemocratic simply because they were not its worst victims. The Muslims, he observed, enjoyed a much better deal compared to people from the untouchable castes.

While he was skeptical about the innate imperialist characteristics of Hinduism creating accommodative conditions for the peaceful coexistence of minorities, he did not spare the Muslims for their own minority communalism. For him, the abolition of parties like the Muslim League and Hindu Mahasabha and formation of a mixed party of Hindus and Muslims was the only effective way of burying the ghost of Hindu raj. He did not perceive much difficulty in the formation of such a party based on the material conditions of the majority. In fact, such political unity was achieved between 1920 and 1937 when in most provinces the Muslims, non-Brahmins and depressed classes worked as a team under the Montague-Chelmsford Reforms.

Having dispelled the validity of the Muslims' misgiving that they would be persecuted under Hindu raj, Ambedkar did not rule out the possibility of the emergence of the latter when he prophetically declared: "If Hindu raj does become a fact, it will, no doubt be the greatest calamity for this country. No matter what the Hindus say, Hinduism is a menace to liberty, equality and fraternity. It is incompatible with democracy. Hindu raj must be prevented at any cost."

Ambedkar struck at the root of the Muslim argument that the creation of Pakistan would solve the communal problem. He termed the Muslim League's Pakistan scheme a political perversion because instead of solving the problem of minority Muslims, it made them more vulnerable and favoured the majority Muslims who did not need or deserve it. Pakistan was unnecessary for Muslims in areas where they were a majority and worse than useless for Muslims where they were a minority.

On December 15, 1946, in his maiden speech in the Constituent Assembly, he hoped that some day the light would dawn upon Muslims and "they, too, would begin to think that a united India was better for everybody." Secularism and democracy were the sole basis of coexistence. In the crowd of small and big villains of the Partition drama, Ambedkar stands out as the only hero, a true statesman.

(Mumbai-based Anand Teltumbde is the author of Ambedkar on Muslims.)