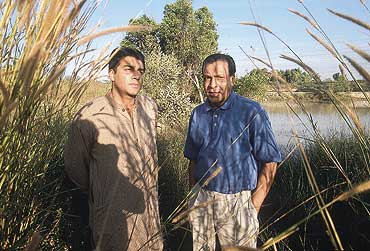 outlookindia.com
-0001-11-30T00:00:00+0553
The silhouettes of soldiers and the silence enveloping the sprawling plateau portend a difficult terrain. The shrubs and elephant grass, broken by the snaking tracks, add to the hazardous attributes. The foliage has cushioned the fall of many a paratrooper and served as veil for endless army exercises in the past. Now it is to yield a gargantuan oxygen mint, one planned by a father and son duo to generate limitless quantity of fresh air in Bangalore, a city choking on its own development.

India’s first artificial forest in an urban sphere is what the twosome of Suresh Heblikar, a filmmaker and environmentalist who heads Eco-Watch, and his son Akshay, are engendering here. The arduous task involves growing 200,000 trees in the 400 acres owned by the Army Service Corps’ Centre (south) here. In keeping with its name, Tree-Diversity Park, it is planned as a hothouse of vegetation, nurturing several hundred species of trees. Some are rare, many aromatic and medicinal and others of fruit-yielding varieties—80,000 saplings in the first phase.

For Heblikar senior, an evangelist on environmental issues, it is not just another bald attempt at afforestation, but one that spawns social, economic and ecological benefits. "First, it has been the source of employment for 50-60 people from rural areas. When the trees bear fruit, our soldiers will have large supplies of jackfruit, tamarind, mango and gooseberry. The trees will also attract a variety of birds and other animals. And the water, which we plan to store through techniques like rainwater harvesting, will help recharge groundwater levels in neighbouring areas. The scene could even inspire artists or painters in their creative pursuits, just as for the ‘Lake Poets’ in English literature," he said.

Like most projects of such magnitude, funds have been hard to come by. But that hasn’t deterred him from doing the ‘spade work’, literally speaking. For Heblikar, being in tune with nature brings more happiness than the material wealth from his work as actor and filmmaker. Such is his passion that he gave up work to campaign against the nuclear power plant at Kaiga in Uttara Kannada district of Karnataka. The ardour’s visible in his much acclaimed Kannada films, Kaadina Benki, Usha Kirana and Aaghatha which have environmental issues as a backdrop, or the 20-odd documentaries and short films he’s made. The documentaries and short films constitute the props at workshops and theme talks organised by Eco-Watch for school and college students.

Son Akshay, a post-graduate in environmental sciences, is also a keen follower. "At Senaranya (the urban forest project), we are trying to preserve a number of species of certain dry zones of Karnataka," he says. Akshay now plans to take up projects for similar parks in Tumkur and Kolar districts.

The Army Service Corps is also quite enthusiastic about the idea. Says Col P.D. Kulkarni, Dy Commandant at the asc Centre, "We were already planning to develop a part of the camp area as a plantation. So when Heblikar approached us, we gave him the go-ahead after getting the necessary approvals. However, the exclusivity of the land as a training area will remain."

Meanwhile, some corporate houses have also pitched in with tractors and organic manure. Eco-Watch has also received an in-principle approval from the Indo-Norwegian Environment Program (INEP) for funds of Rs 50 lakh. However, Eco-Watch will have to match this amount from its own resources.

Though it will take a couple of years for the Heblikars to raise this vast herbarium, they are already planning ahead for their next project in the Western Ghats. "My heart is in the Western Ghats. We want to set up an environment centre there for students as also to protect the environment and the culture, which go hand in hand. My dream is to turn environment into a religion. It will unite all of us, irrespective of the continent one is in," says the father. Lofty ideals indeed. If you’d like to participate in this project or contribute towards the cause, contact Eco-Watch. Ph: 080-6655070, 6553422 or email: ecowatch22@yahoo.com