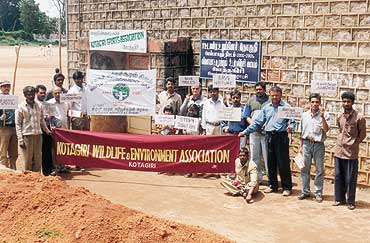 outlookindia.com
-0001-11-30T00:00:00+0553
Visiting the Nilgiris in the aftermath of the recent forest fire is depressing—vast tracts have been laid waste and charred hillsides interrupt the green stretches with alarming frequency. You need every pick-me-up you can get. The Kotagiri Wildlife and Environment Association (KWEA) is just that, and it’s heartening to see how much difference this small team of dedicated people has made.

In the ’80s, three agriculturists and inveterate jungle trekkers from Kotagiri found themselves linked by their mutual dismay at the rate of deforestation in their region. Inspired by a radio talk on nature conservation, A. Bhupathi, M.K. Bhojan and J.S. Jayachandran decided to take up cudgels for their precious forestland. Says 49-year-old Bhojan: "We read all the books we could on conservation and afforestation; we wanted to do something. This was our land and we didn’t like what was happening to it."

What began in 1985 as a nature club for local children in Sackatha village near Kotagiri metamorphosed in 1988 into the KWEA, with 18 members. Today, the organisation is at the vanguard of the environment movement in and around Kotagiri, working closely with the forest department and the locals. What lends it credibility is that the members are all locals who speak to the villagers and tribals in a language they understand. As agriculturists, KWEA’s founder-members know how difficult it is to balance conservation and earning a livelihood.

Among the important things the KWEA has done is to set up village forest committees. Members are taught conservation and afforestation. Most crucial, they watch out for illegal tree-felling or poaching and report it to the forest department. Says Bhojan: "We go from village to village and have slide shows and distribute handbills." Poaching and felling have lessened considerably, he says, adding: "We’ve managed to create an information network among the locals and that helps the forest officers considerably."

Shola forests, in the higher ranges of the Western Ghats, are evergreen rainforests evolved over millions of years. Not only are they important because of their stunning biodiversity but also because they are the main water source for the neighbouring regions. The tragedy is that vast areas are gone and it’ll take another million years to replace them.

The KWEA’s significant campaigns include its unrelenting battle against imported tree species like the eucalyptus and wattle. Brought in from Australia by tea planters and viscose factories, this species drains the land of groundwater. KWEA secretary K. Senthil Prasad calls them the ‘selfish’ trees. He points to a classic study in contrast on two sides of a forest track—one side is lush tropical forest with teeming undergrowth; the other is stark eucalyptus woodland, entirely bare of secondary growth. "The species will not allow anything to grow in its shade," says Prasad.

It’s this that forms the base camp for another of KWEA’s interesting activities—organising eco-treks and nature tours. School children are taken on forest trips where they are taught the difference between wattle and native trees; about water sources, wildlife and conservation; and then awarded certificates from the LSWC.

Other issues taken up by the KWEA include illegal quarrying in the Nilgiris, pollution by local mills and getting subsidised wood depots and gas connections for villagers.

Significantly, the organisation gets no external funding. Says Prasad: "We’ve managed so far only on member subscriptions." The members believe this helps them stay independent. The annual subscription is about Rs 125; and there are about 40 subscribers, but only six working members, all of whom have other jobs but spend practically all their free time trying to keep the forest and wildlife from disappearing altogether.