Echoes Of A Rumble

The markets seem buoyant, forex reserves are shooting up, retail investors are making hay. But beware the Ides of March. 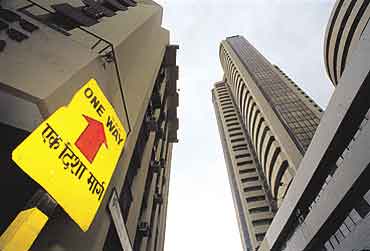 outlookindia.com
-0001-11-30T00:00:00+0553
On March 9, 2005, the BSE Sensex was barely 46 points lower than the landmark 7000 mark. Everyone waited for that moment; that psychologically important one that was akin to the US Dow Jones crossing 10000 points in 1999. But the inevitable was postponed. Thanks to the two initial public offerings (IPOs) of Jet Airways and Punjab National Bank, which together mopped up a whopping Rs 5,000 crore and sucked money out from the market. Says Devesh Kumar, head equities, ICICI Securities: "It would have crossed 7000 and given a boost to investors had it not been for the IPOs."

Last week too, we waited, hoping for the Sensex to breach that mark. But alas, the markets went into correction mode in the first few days. Still, as the experts point out, it's now a matter of when, not if. "This is the pent-up demand of the last few years that's coming out now," says Jayesh Seth, Joint MD, Kantilal Chaganlal Securities. There seems to be only one way for the Sensex to go now—up, up and away. Not surprisingly, the buzz on Dalal Street is about when it will cross 10000 points. And one's reminded of those good ol' days in the early 1990s when the big bull, Harshad Mehta, predicted a similar rise based on his own theory relating to replacement costs of existing businesses.

Mehta's prediction turned out to be a false alarm. In fact, it became a wake-up call for investors who saw their profits eroding within days, as the Sensex plunged to new lows. The securities scam put an end to those wild dreams of becoming millionaires within months. So how will the current bull run pan out in the next few months? Will the Sensex zoom or result in a bigger doom? Will the India story continue to hold sway over the starry-eyed foreign institutional investors (FIIs)? Will retail investors become richer-than-ever in a trice?

We tell you whether to put in your money where the experts' mouths are.

First, let's examine the links between the shrinking dollar and the rising Sensex. Over the last few months, we've heard the news about the ever-surging FII inflows (see chart) that are adding billions of dollars to the ever-burgeoning forex reserves and causing seismic waves on the Indian capital markets. Like it or not, most of these flows are being dictated by the rapidly falling dollar. To hedge their profits in the US that're getting squeezed, FIIs are investing with a vengeance in emerging markets. Not just India, but also in South Korea, the Philippines and even Pakistan.

The result: markets in all these countries are looking northward. In case you didn't know, the Sensex has shown the lowest increase when compared to other Asian markets. This year, the BSE index has risen a mere 2.6 per cent; the figure for Korea is 10 per cent, 15 per cent in the case of the Philippines, and a whopping 65 per cent for Pakistan. And as far as forex reserves go, those of other emerging countries have shot up more spectacularly than India's.

If the dollar slide continues—and there's a growing consensus on that among monetary experts—global money will continue to converge on Dalal Street. But if the tide turns, expect major corrections on the BSE. What's more important is that economic growth in nine nations, including the US, which constitute 60 per cent of global GDP, is expected to slow down in the second half of 2005 and 2006. If that happens, expect the worst to happen.

US economist Gail Fosler wrote in Newsweek: "... when the United States catches a cold, Asia gets pneumonia. Even if the United States contracts a chill, the impact on Asia will be significant." If a US slowdown happens, greenbacks will fly away from India, Korea, the Phillippines and Pakistan. And the markets—like Jacks and Jills—will tumble down the hill.

This will hurt retail investors, who are currently thronging the market. In the case of new IPOs, small investors, usually with applications of less than Rs 50,000 each, have increased their participation. Consider this: the retail portion of the recently concluded UTV IPO saw the highest bidding in the retail portion, which was oversubscribed 38.6 times, as against the entire issue being oversubscribed about 26.35 times.

Mutual funds are also raking in the moolah. This year, fresh investments in new schemes stood at Rs 3,879 crore, and Franklin India Flexi Cap Fund itself saw an inflow of Rs 1,950 crore. Since February last year, funds under management in various equity schemes have increased by Rs 9,244 crore or 37 per cent and are currently at around Rs 34,067 crore. Such a frenzy has not been seen since 1995-96 when a record number of 1,428 companies made public offerings. Unlike the past when investors burnt their fingers, the new IPOs are resulting in profits. Of the nine IPOs since December 2004, seven are trading over their offer price.

In a bid to tap rising retail sentiments, brokers have started installing trading terminals in small towns. Seth has added 100 terminals this year, mostly in towns with less than 1 lakh population each, and some of them churn out a daily turnover of Rs 1-1.5 crore. In Raipur, Chhattisgarh, his terminal raised Rs 18 crore during the PNB IPO early this month. Others like Ramdev Aggarwal of Motilal Oswal Securities are inundated with calls and letters from the small investors. Aggarwal recounts a letter he got from a serving army commander, posted at a far-flung cantonment town. The commander wanted to invest Rs 1 lakh, but only on the condition that his investment yielded very high returns, his money was invested in high-security paper, and the companies had good cashflows and valuations. Those are the expectations, and Aggarwal was tempted to tell his probable client that investing in stocks didn't result in miraculous profits.

Market-watchers see this as an increasing sign of a domestic liquidity push. Till now, it was the FIIs that accounted for the rising market. But now retail investors are doing their bit. What's more, until mid-2004, it was the large-cap companies that were outperforming the Sensex. Over the last two quarters, the small- and mid-cap firms have surged twice as fast as their large-cap counterparts. In the last six months, the S&P CNX Nifty increased 26.2 per cent, while the CNX Midcap soared 52.7 per cent. And that's where the action is. As is well-known, retail interest can vanish in a minute if the FIIs decide to pull the plug. This can happen instantly if the dollar starts rising and causes a panic among greenback pessimists, and the signs of a global slowdown show up on the economic horizon.

In many ways, the slowdown fears may prove to be the worst. For, the markets today are also being driven by optimism in future corporate earnings, largely due to the revival in commodity prices and increased consumer spending. Over the last two years, surging demand in countries such as India and China have seen commodity prices scaling new peaks. Riding on these price hikes, companies like Tisco posted record profits at

Rs 2,565.59 crore for nine months ending December 2004, an increase of 110 per cent over last year. Other metals and steel companies have done the same too.

On the flip side, rising input costs coupled with lower offtake can spell trouble for profit margins. Already, prices of final products like cars and consumer durables in India are sliding up. Budget 2005 has also forced several manufacturers to raise their prices. This may further lead to a demand squeeze. The rising global crude prices will have its own negative impact on all economies, including India's. Already, crude prices are hovering above the $ 56-a-barrel despite the initiatives by opec to raise its output.As long as there are question marks over Iraq, Russia and Iran, oil prices are not going to stabilise.

Cautions Shiv Puri, MD, Voyager Investments Advisors, one of the latest FIIs to enter India, "Earlier, people came to India, invested in large-caps, and made money. Now, you won't see valuations rising by 3-4 times. Picking stocks will be more important." Since even the prices of most penny stocks have shot through the roof, this won't be easy. Investors will need to find some great strategic stories to justify fresh investments in key sectors or specific stocks.

Now that we've added several caveats to the ever-rising Sensex, let's sign off on promising note. "It has been a steady climb in the Indian markets because the growth has come along with the coming together of several factors. The investors have seen great corporations, a safer environment and a real growth story," explains Andrew Holland, executive VP, DSP Merrill Lynch. According to Puri, any FII with a global investment strategy has to include India in its overall portfolio. That explains why most of the foreign investors have decided to enter the Indian markets in a big way.

Add to that the fact that price-earnings multiples in Asian markets are still low; it's 14 for India and 12 for other Asian markets. Such multiples are sustainable, especially in India which is growing faster than most Asian countries. Experts reckon that market capitalisation may increase by 15 per cent, easily adding an additional Rs 2 lakh crore (that's 12 zeros after a 2) to the current figure. Says Aggarwal, "Traditionally, stocks in emerging markets trade at 17-18 times earnings. If the multiples had been 25-30 times, I may have thought stocks were overvalued. At this stage, there's space to grow and values to be had." Statutory warning: If you invest money and lose your stash, don't blame Outlook. You have a free will.