Eats On Their Beat

As food trucks revv up, foodies bite in 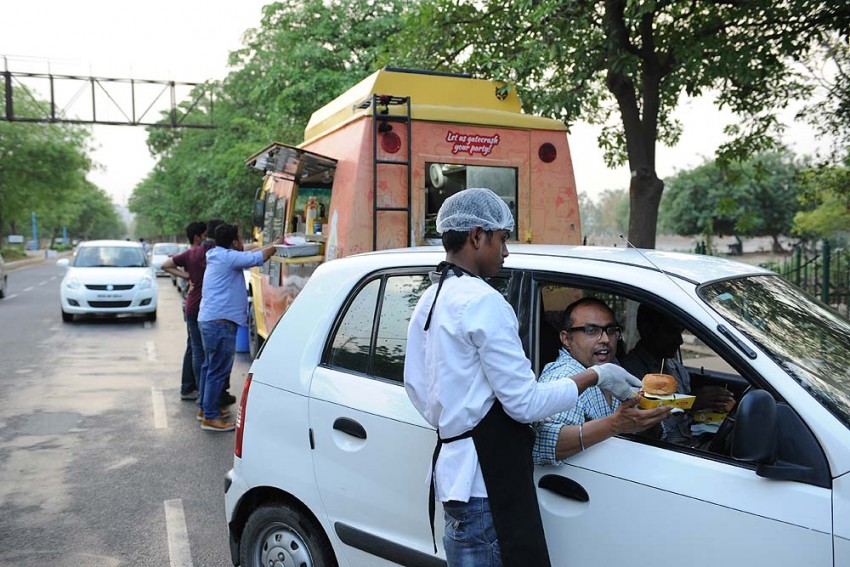 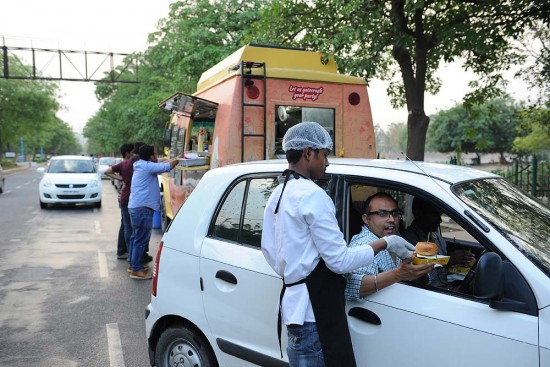 Snazzy trucks with modernist kitchens that smoke, sizzle and arbeque. Food trucks have always been a fixture in US cities, serving up global, exotic, spicy or even organic fare. Now they are adding a dash of quirk to Indian street food.

Whether in Bangalore or New Delhi, mobile kitchens have garnered a following among youngsters and office-goers, and they are on the rampage on social media. Come evening, and a queue sna­kes around the vans for quick bites like burgers, sandwiches, hotdogs, even BBQ ribs—they’re here to lure you from the gre­­asy options at your roadside thelawala. Bangalore foodies have warmed to the idea, preferring this convenient alt­ernative to exp­ensive, dine-out victuals. The per­i­p­­atetic Spitfire BBQ Truck offers its customers a wide range of chow down varieties, from burgers to hot dogs and other barbequed goodness. Another truck, Veg Foodie Express, gives a hea­lthy twist to regular meals, making flavourful dal-roti, veggies and paranthas.

In Delhi-NCR, Mexican delights pour piping hot from the Lalit Food Truck, with their distinctive Tex-Mex cuisine, with tortillas, wraps and tacos put away with rare speed. The truck occasionally ambles over to Chandigarh. Even in Gurgaon, the past year has seen a lot more people prefer food on-the-go rather than a restaurant experience. Eggjactly, whose bri­ght yellow truck is parked on a highway at Leisure Valley in Gurgaon, has a more typically American take, sticking to US street food perennials like burgers and hot dogs, with, of course some twists. “Corporate nine-to-fivers love to stop by our truck for a quick bite during the evening...,” says co-founder Vikrant Misra. Flavour Labs, another Gurgaon-based truck, prefers hanging around corporate offices, dishing out easy-on-the-palate fare. Rohan Raj­ga­rhia, co-founder of the company, thinks their parking preferences draw foodies like a magnet. Flavour Labs head chef Rajneesh Kumar enjoys experimenting with different flavours and brings out alternative menus every week. Themes such as ‘Kobri’ and ‘Hoppers’ have bec­ome synonymous with Flavour Labs, off­ering unique variation to foods like your favourite idli—now in sandwich form, or the dosa, now again in a wrap.

The mushrooming of such trucks shows how adventurous entrepreneurs are looking at the alternative food industry as a viable business option. For some entrepreneurs, a food truck signals tow­ards the ‘next big thing’ in the culinary world, while for others it appears to be a stepping stone to something bigger, perhaps a hotel. It has its risks though, like any business. Nandita Shetty, co-founder of Flavour Labs, says, “Leaving an R&D career and starting a food truck wasn’t an easy decision.” Diving head first into the food truck business requires courage and as its affiliates will tell you, the public still hasn’t cottoned on to the fact that these trucks won’t sell noodles and momos like food carts outside colleges. Even then, a few light patches of urban India has come to accept this convenient option.

Indian television buffs would be ple­a­sed as punch if these patches thicken, spread, then join up on the map, like multiple gravy spills. Soon, we might just see an Eat Street 2.0, starring not American, but Indian food trucks. A tighter, swifter embrace of this fledgling business is, however, a key factor for large-scale growth. But with a lot more palates yearning for offbeat culinary choices and locales, these kitchens on wheels may just be emitting the right olfactory come-hither.

That Bug Up In The Air