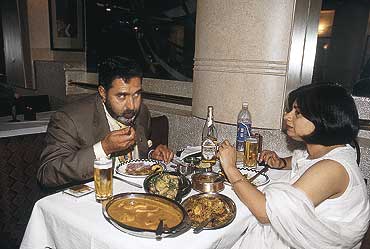 Word’s got around Trishna restaurant in Mumbai that Vijay Mallya is expected and the staff’s in a tizzy. Surprising, since Trishna’s always so celeb-squeezed you’d think one more would hardly ruffle the atmosphere. But then he strides in among a flurry of stengun-toting bodyguards, unapologetic that he’s only an hour late. Distinctive in his Armani suit and yellow Leonard tie, the customers temporarily give up their menu cards to watch the beer baron settle down. His larger-than-life flamboyance compels even fish-satiated foreigners to ask the staff who he is.

Trishna, nestled in a crowded bylane of the Fort, is a favourite eatery of millionaires looking to slum. The place is so strictly no-frills, you know they come here only for the food. It’s considered the final, sublime destination of fish foodies. Ask Imran and Jemima Khan. Though just a notch above Udipi joints in ambience, snotty page 3 types have no reservations being spotted here, their sleeves rolled up, elbow deep in clams and crab shells bouncing off their brows. Helpful hint: shellfish lovers are advised to take the restaurant’s offer of an apron.

But Mallya’s turned vegetarian courtesy his Art of Living affiliation, so you’re somewhat nonplussed at this choice. But this is Mangalore cuisine territory where Mallya hails from and so he is a regular.

The waiter wants to know his drink. Beer, of course. Which one, he dares to ask. The atmosphere turns frozen. “Kingfisher, what else?!” snaps our guest menacingly. The waiter scurries off. “Is there any other worth having?” he queries incredulously.
The ‘pepper garlic butter crab’ here is to die for, swear the regulars. Mallya will have none of it, even for me. “That’s not Mangalorean. We want a Mangalore Karwar lunch. Get some authentic dishes,” he orders.

Our table is laden with food, most of which is spicy and coconut-based. A prawn curry slips in. He spoons out the gravy, minus the prawn. Like a true Mangalorean, he wants his rice. His billionaire lifestyle may include self-owned aircraft, yachts, sports cars, racing horses and a dozen mansions the world over but “at home,” insists he, “you’ll find me in a T-shirt and dhoti, eating simple food from a thali.” And while he might dine on asparagus pate and Camembert souffle at some of the world’s most expensive restaurants, he does enjoy occasional meals at Kamat’s.

What he can’t do without is his supply of green chillies. He calls for some and proceeds to bite into the hottest of them. You can’t help but wonder aloud if that is how he chews up his rivals in the liquor industry and on the horse racing tracks. A thoughtful pause later, a wicked smile springs into those arresting eyes: “Maybe.” Ah well, they don’t call him The King for nothing.