Lata Khubchandani Dines Seema Biswas at The Legacy of China 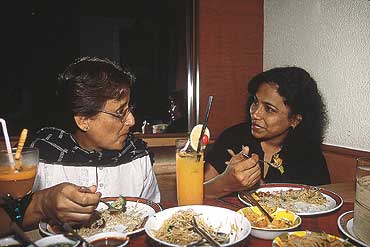 outlookindia.com
-0001-11-30T00:00:00+0553
This alternate Phoolan Devi can’t seem to shake off her Bandit Queen image. As we head towards The Legacy of China, the popular restaurant at Mumbai’s Seven Bungalows, we hear whispers of “Psst Bandit Queen!” Biswas is dressed in casual black slacks and a black shirt, her newly-cut hair highlighting her expressive, eloquent eyes.

From the moment we enter, the restaurant staff besiege us with expert suggestions on what to order. The steward is a tad disappointed when he discovers we’d both stick to veg fare, so we persuade Seema to break the rule. She agrees to have non-veg instead of breaking the steward’s heart.

Seema starts her meal with a spicy seafood soup and promptly gives it her wholehearted approval. Much encouraged, the steward asks her to try their sizzling chilli chicken starter. Order through, we get talking. “I’m currently shooting for Ram Gopal Verma’s Company,” says Seema. “I find his style of working very creative and innovative. If my eyes so much as register a minor change in expression he is quick to enquire why.” She is obviously taken in by his perceptiveness.

What of Phoolan’s death which forcibly brought her back into the limelight? Her house was crowded with TV cameras and reporters. “Do you think you have a karmic bond with Phoolan?” I ask. “It would seem so, wouldn’t it? It took me a long time to put the Bandit Queen image behind me. Not that I succeeded entirely. Now that she’s been killed, I’ve been reliving her life all over again. Even earlier when I was doing the role I was very involved with her experiences. Her violent death only brought it all back till I had to tell myself to snap out of it,” she says. When people speak of Phoolan they seem to see Seema in their mind’s eye. “Even my own family does that. My sister called up my niece to tell her Phoolan had been shot and my niece was shocked till she realised it wasn’t me being referred to. My hairdresser too mistook me for Phoolan and had a similar reaction,” she says.

Food provides the much-needed respite to this rather grim conversation. Seema shakes off her mournful mood with a sip of Dragon Twist, a mocktail which is a delectable combination of mango and strawberry crush. Our meal comprises exotic vegetables in dragon sauce, vegetable munfan rice—a dish with mushrooms and bamboo shoots, and a bland concoction with noodles as base. Seema goes on to talk about her forthcoming Malayalam film, Shantam, directed by Jeyaraj. The film even took her to the Moscow film festival.

Our dessert is a Thai pudding called Sunkya. It looks very delicate and just melts in the mouth. It also reminds Seema of how she has broken her diet regimen rather blatantly. Our parting gift are fortune cookies, giving us something to laugh about.

The Race To Be Heard