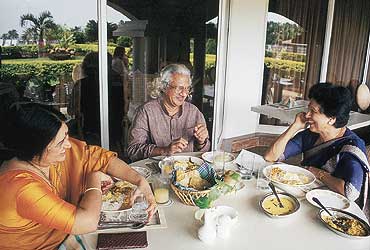 Adoor Gopalakrishnan is in the throes of creativity again, planning a new movie after an interval of a long five years. Yet, the Padmashri awrd winner was accommodating enough to take time out and agree to have lunch with me at the Taj Garden Retreat, Varkala.

I picked up Adoor and wife Sunanda from their beautiful house, a traditional Kerala nalukettu, and headed for the Taj where the elegant lobby offers a splendid view of the monsoon sea. As we sat admiring the seascape in the spacious restaurant, the chef dropped by to enquire if we’d like anything special. “I am a non-vegetarian and fish is my favourite dish,” said Adoor.
The meal began with Meen Pollichathu (fish of the day Aikoora (sear fish) coated with masala, wrapped in banana leaf and cooked over burning embers) which Adoor could only describe as “fabulous”. This was followed by Appam and prawn curry. Appam is made from rice powder fermented with toddy or yeast and the giant prawns were cooked with masala in coconut milk. Midway through the prawn curry, Adoor explained his philosophy of movie-making—that an audience should be exposed to the characters’ complexities. “Boy does meet girl but not in such obvious fashion. It should only be implied as in my Elipathayam,” he said.

The next course was rice and chicken fry with buttermilk curry and a vegetable dish. As we dug in, Adoor told me about his proposed film. “This has been the longest interval between two of my films,” he said. “When one makes a movie, one lives it. I need time to wean myself away from the earlier creation. Continuity between films is inevitable, but it should not become repetitive either,” he explained.

Meanwhile, our photographer commented that he was going to the US to study cinematography. “You learn nothing in the States. The Poona Film Institute (from where Adoor passed out) is the best institution to learn the craft,” said Adoor. He regrets the angst of the now-generation unlike the hopeful generation of the past. But this sombre mood evaporated as the dessert appeared. We went for Ada Payasam, another local delicacy made from rice-flakes, jaggery and coconut milk, liberally sprinkled with raisins and cashew nuts. “Mmmm, lovely,” said Adoor. I could have said that of our conversation too.