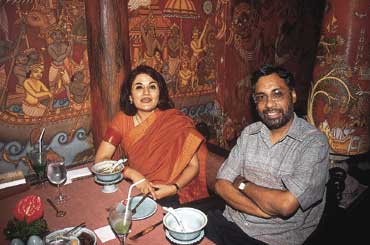 outlookindia.com
-0001-11-30T00:00:00+0553
Over the years my meetings with Pawan have been confined to sharing clandestine lunches at his office comprising of excellent shairi, cold dosas and the infamous South Block Coffee (reminds one of Musharraf—looks harmless, but hard to swallow). All of which I have loyally consumed in the name of friendship. At the more agreeable India International Centre, we have never got past the first soundbyte, forget the food bite. At one such lunch, Pawan was interrupted every time he tried to address a complete sentence to me. Therefore, it is with relief that I meet him at the Spice Route in Imperial Hotel.

Pawan gives his friendships the same serious attention he gives his career. And now his buddies have been bidding him adieu for the past few months with a rare fondness. When he arrives (no doubt transiting between more adieus) I pull his leg about how his frenzied farewells have provided endless fodder for gossip columnists. And so he quotes: Gulshan parast hoon, mujhe gul hi nahin azeez. Kaanton se bhi nibah kiye jaa raha hoon main (I live among the blossoms, but I do not care only for the flowers, I have learnt to abide with the thorns as well).

Meanwhile, the petite Punjabi chef, Veena Arora, who reassures me that she actually grew up in Bangkok, quickly resolves our dietary queries. We begin with a tangy and spicy mushroom salad followed by a clear chicken soup (Kaeng Cherd Kai Soup) for Pawan and a Tom Yum Phak, a delicately flavoured vegetable soup for me. I am thrilled because nothing tastes Punjabi and no one has barged in to pump Pawan’s hand.

Pawan looks back. Ten years, 10 books. He’s been juggling three jobs—diplomat, spokesperson for the government, author—and six columns every month. But his lament is that people only see him as part of the glamour world, they have no idea of the hard work he puts in.

We’re now into the main course—having already polished off the Por Pia Chae, the crisp spring rolls—which for Pawan is Kaeng Kung, or prawns cooked in Thai curry. I ask for Kaeng Kheow Waan Chae, assorted vegetables cooked in green curry, with a rich aroma of basil.