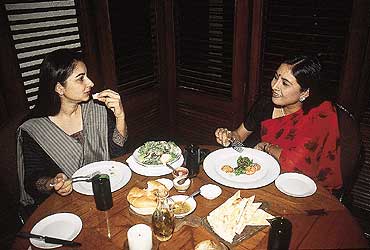 Sangeeta Singh Deo looks good enough to feature on the menu, in mirchi-red and pearls. A quick glance down the list of tongue-twisters and she opts to wrap hers around a Pomodoro fresco e mozzarella bocconcini con pestor olive basilico pomodori sechhi, for starters. I opt for a plain old caesar salad.

La Piazza’s not the most politically correct choice of eatery for a bjp MP, she says. It’s OK, I tell her, Sharad Pawar served pasta at dinner after he putta de knife in de signora’s back. Crisp garlic bread and little bowls of olive oil appear. “Got to pay for this with dragon breath later,” says Sangeeta, resisting temptation.

Sangeeta knows her way around the menu, La Piazza being a favourite haunt. She passes on the wine, declines the duty manager’s offer of advice from the chef and—vegetarian for a day—asks for ravioli (Raviolone di ricotta con olive e pomodori sechhi) in tomato basil sauce. I go with the canelloni (Canelloni di ricotta gratinati). The food rates an unqualified “yum”. Flavoursome and masala-free (Italian cuisine as it’s meant to be), but we make up for that with hot-hot political gossip: cross-dressers, second wives and who-hates-who.

From there, we move on to her political colleagues, from best buddy Suresh Kalmadi to up-and-coming Rajiv Pratap ‘Rudi’ Singh. She tends to look at everybody’s good side—Madhavrao Scindia’s a nice guy with a great sense of humour(!), Pramod Mahajan’s an awesomely charismatic speaker, cassettes of whose speeches sell “in black”(!!), Naveen Patnaik is a dedicated bloke doing an awfully good job as chief minister(!!!).

Sternly quelling her sweet tooth, Sangeeta asks for a cappuccino and after a tiramisu-centred struggle with my conscience, I follow suit. She talks of things personal: how Biju-da encouraged her, as grand-daughter-in-law of former Orissa CM R.N. Singh Deo, to take the electoral plunge, her fear of flying (alone) and why party-hopping doesn’t mean you’re a dumb brunette. Conversation, needless to say, far outlasts the coffee.