The Indians are no chokers. They looked fatigued and we played our best cricket. 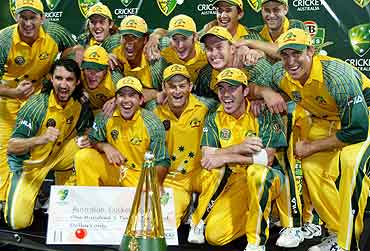 outlookindia.com
-0001-11-30T00:00:00+0553
Intent and intimidate had been two words that cropped up pretty often during our victorious World Cup campaign last year. We rediscovered that spirit of aggression in the last three games of the VB Series, and it gave us the momentum to finally overcome the Indians who had doggedly fought us right through their 12-week tour of Australia. We peaked at the right time, while the Indians started to lose steam from the time they got a week-long layoff before Perth. We had noticed a tendency to tire towards the end of long tours among the Indians, and perhaps some of the younger members had an eye on the flight back home over the last 10 days.

The second final was a mirror image of our Wanderers game with the team reaching the same total at the end of the 50 overs. If the bowlers had won the day in Melbourne, the batsmen did the job at Sydney, and this proves to the world that whether we bat first or bowl, we have the ammunition to knock out the opposition within the first 15 overs. Andrew Symonds continues his quest to becoming one of the hardest hitters of a cricket ball, and his finishing touches to the innings at the scg ensured that the Indians were chasing 360 once again, almost 11 months after the World Cup finals. It was a superb batting display from our top order, but I feel that any total above 270 would have been defended by our in-form attack.

Of the two finals, I would rate our performance in Melbourne as the more crucial one. The bowlers carried the confidence they had discovered in Perth into the finals, and by bowling straighter and shorter, they exposed some chinks in an Indian batting that had been remarkably consistent for two months. We were fortunate to have Brett in top form and full pace for both the finals. He was our main bowler and Gillespie, Williams and Harvey supported him superbly to ensure a top-order collapse. I may have won the Man of the Match award at Melbourne, but the game had been won by our bowlers before I came in to bat.

The Lee factor is what eventually made things really tough for India. I think the most crucial game we played was Perth because it gave Brett the confidence that he had been looking for since he returned from injury. He looked really underdone in the Sydney Test because he had played a fair amount of cricket to prove his fitness and then two back-to-back Tests. He started improving after the short break he took at the start of the VB Series, and by the time he reached Perth, he was at peak fitness and had enough cricket under his belt to make use of the conditions. After the Brisbane one-dayer, where he went for 80-odd runs, I had sat down with Brett to discuss what was going wrong. He listened patiently and then worked on the trouble areas we had identified. The final series was a fruit of all that hard work.

I was particularly pleased with the focus Brett showed during the finals. He had bowled superbly in the first game at Melbourne, but had bowled a couple of no-balls. Though there was no break between the games, he still found time to work on his run-up, proving that even though he was bowling well, he still wanted to improve.

The other player who had a pretty ordinary time in the Tests but came back magnificently in the one-dayers was Adam Gilchrist. His batting at the top of the order was as intimidating as Brett’s bowling. He turned the corner and rediscovered his form in Hobart, where he scored a career-best knock. After that he decimated every attack that came his way, and right through the series, he scored at a strike rate that was remarkable even by his high standards.

While Brett needs a talk when the going is not good, Gilly just needs to be left alone to sort things out on his own. He is too talented a player to be out of the action for long, so nobody was really worried when he went through a rough patch in the Tests.

The Indians played their best cricket in the Test series, starting at Brisbane, peaking at Adelaide, and then coming back strongly in Sydney. The long innings played by Laxman, Dravid, Tendulkar, Sehwag and Ganguly must have taken plenty of stamina and concentration, so it was remarkable that they were able to start the VB tri-series as strongly as they did. I think the tour dragged on for them since they got a week off in the middle, they seemed to have lost some of the intensity. India’s batting is what makes it such a dangerous side, and once the batsmen found themselves unable to bounce back after Perth, Ganguly and Wright simply lost the plot.

We were not playing anywhere near our best cricket in the first three weeks of the tournament. While things went terribly wrong for India from Perth onwards, the reverse happened with us. We went into the finals with the knowledge that if we played our best cricket, there was no side in the world that could defeat us.

In many ways this tour has proved that while India’s unquestionable talent makes it a formidable Test side, they still have some way to go when it comes to the one-day game. Their laid-back running between the wickets and erratic ground fielding don’t get shown up too much in Tests. But at the start of the one-day tri-series, we knew these were weak links in the Indian side, so we’d always try and pinch the extra single while batting, and put pressure on the Indians with direct hits and sharp fielding when they batted.

While India did play very well, it must hurt that they are going back on such a disappointing note. I know that the Indian fans are passionate about cricket, and hate to see their team lose. However, the last week of the tour must not make them forget the superb display their team put up, especially in the Tests. They played exceptionally well to be the first team to take the lead in a Test series against us in over a decade. They challenged us in every Test and even in Melbourne, where we squared the series, they started very strongly.

I would also not buy the theory that the Indians are chokers. If they were unable to handle the big moment, they would have buckled under pressure in the last Test at Sydney. The series was poised 1-1, and we were really gunning for them. Instead of keeling over, they went on to score a record total and were in a winning position at the start of the fifth day. Ganguly’s men would not have tested us so severely in that game if they were chokers.

When we came off the ground after our win in Sydney, the ever-gracious Sourav told me: "You guys seem to have it too easy. You win everything these days." It must have been tough for him to concede defeat, but it showed the mutual admiration that the two teams shared right through this series. We will be seeing a lot of the Indians later this year, so the Indian captain will be eager to even up a few things then.