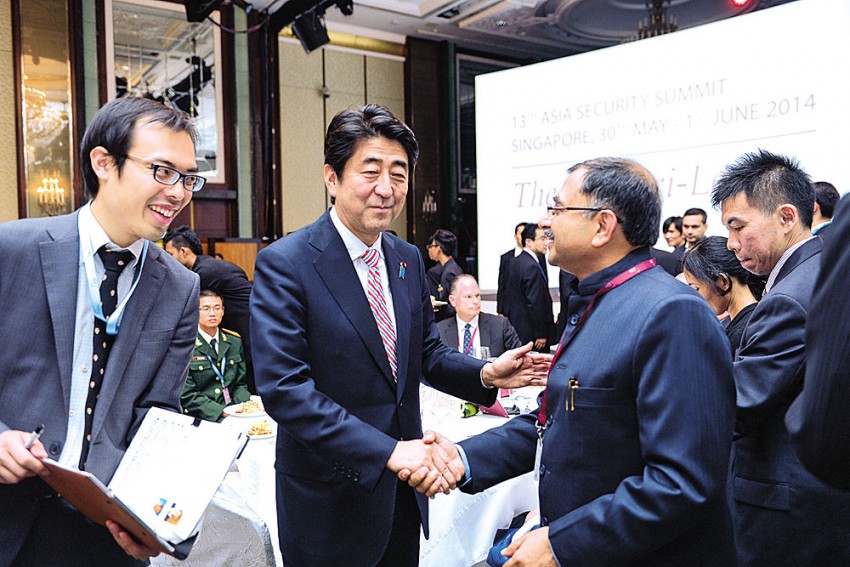 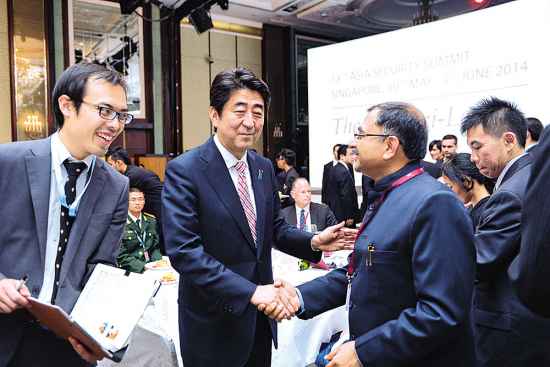 “Please Mr Vijay, convey to your Prime Minister that we are waiting to welcome him in Tokyo. We are very happy with his victory.” That was an affable Shinzo Abe, the Japanese premier, who spoke to me these warm words in Singapore. Going beyond the usual jargon loaded with strategies, statistics, eco­nomic engines and stability, the Asia-Pacific region’s search for a trusted ally finds a suitable partner in India. Can India measure up to the expectations of its eastern friends?

The three-day Shangri La Dialogue in Singapore turned out to be a platform for idea exchange, with security concerns dwarfing every other issue in a region which has been a magnet for a shift in prosperity and influence from the West. But can we also allow conflict being shifted to a region that has had Indian cultural footprints for the last two millennia? The Asia-Pacific needs a strong Indian presence, to profitably use its unique position as a friend to all stakeholders, from China, Japan and Vietnam to Philippines and Singapore. A friend to all and foe to none, the Indian in the Asia-Paci­fic has always been sought out as a trusted friend. Editor-in-chief of The Straits Times Patrick Daniel said the region awaits a much more active Indian presence. Unlike others who create suspicion, Daniel said, you don’t scare anyone, but bring in a whiff of fresh air, togetherness and trust.

So far, India has been perceived as a reluctant player, good in earnest announcements, but doing little towards realising those noble sentiments. Narendra Modi’s arrival has raised hopes of a better, more engaging India in the region.

If PM Shinzo Abe spoke warmly about Modi in his keynote address, British defence minister Philip Hammond described the changes Modi has brought as ‘revolutionary’ while talking to me at the President’s dinner. He said the UK looked forward to engage with Modi’s India in a much more substantive way than ever before. The US defence secretary Chuck Hagel spoke about further strengthening US-India defence ties. The Chinese were also excited  and positive about Modi’s fast-track regime in power.

Eric X. Li, a multi-millionaire entrepreneur from China and a participant in the dialogue, claimed he has been a Modi ‘fan’ for the last ten years. “I adore him as India’s Deng Xiaoping,” he said. “I have met him once in Gujarat, he is magic! Mr Modi must visit China first, please tell him.” The Shangri La Dialogue, initiated in 2002 by IISS (International Institute for Strategic Studies) as a Track I inter-governmental forum, is a vital annual fixture in the diaries of Asia-Pacific defence ministers and their civilian and military chiefs of staff as also members of the strategic community.

In 2014, Modi’s new government in New Delhi reverbera­ted positively in the various discussions at the dialogue. If US, Japan and Britain were eager to work with a more decisive India, the Chinese delegation, led by the chairperson of the foreign affairs committee of the National People’s Congress, the graceful Ms Fu Ying, expressed happiness at the Modi-Li Keqiang telephonic conversation and Modi’s invitation to President Xi Jinping to visit India. When Modi, after taking  over as prime minister, described India-China ties as robust and their strategic partnership as a ‘priority’, they were welcomed across the faultlines of diplomacy. I had a long chat with Fu Ying about these matters on the sidelines of a Phoenix debate, viewed by over 400 million viewers in China and Asia-Pacific.

India maintains that the major security challenges in the Asia-Pacific stem from maritime and territorial disputes—ranging from tensions in south and east China seas to the spread of terrorism, fundamentalism, drug-trafficking and climate change. India believes territorial disputes should be resolved bilaterally, through negotiations supported by the basic principles of freedom of navigation and strict adherence to the Bali principle, which renounces any threat to use force or the actual use of it. India, which keeps an equidistance from all disputing stakeholders, is expected by Asia-Pacific nations to not just have a calming effect on the troubled waters, but also to play a leading role in ensuring that Asian economies remain the engine of growth, realising the dream of an Asian century.

Modi’s emergence on the scene is widely expected to help maintain peace and stability in the Asia-Pacific.

Hand Across The Seas