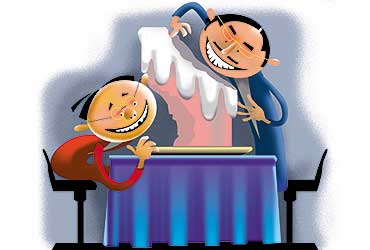 outlookindia.com
-0001-11-30T00:00:00+0553
What does IC stand for in Silicon Valley? Integrated circuits, right? Wrong. In the golden state of California, where minority communities form the majority (51 per cent), the term describes the talented and hardworking Indian and Chinese professionals who have come to form the backbone of Silicon Valley hi-tech companies.

But are there differences between the communities? What are their unique strengths? How do they benefit from their sheer numbers and networking? Do formal networks linked by common ethnic or professional ties allow these communities to increase the benefits they derive from a growth area like Silicon Valley? Do they get better jobs, better access to capital, leading to perhaps higher levels of entrepreneurship and innovation, from such networks?

To get answers to these questions, Dr Rafiq Dossani of the Asia/ Pacific Research Center at Stanford University led an on-line survey in collaboration with the University of California, Berkeley. The average age of all respondents was 35 years, and 80 per cent were male. Says Dossani: "There were 13 organisations, 10 Chinese and three Indian—TiE (The Indus Entrepreneurs), SIPA (Silicon Valley Indian Professionals) and NetIP (Network of Indian Professionals)—that allowed us to use their membership contact details for the study."

While the survey found that economic benefits of formal networking were less than expected, it unearthed several other interesting nuggets about how the Indian and the Chinese reached where they had. The Chinese came here earlier, as students, and stayed on. Three-fourths of the Chinese are citizens or permanent residents, while nearly half the Indians are on work (H1B) visas. Both Indians and Chinese are well-educated. But the Chinese have higher technical educational levels—a quarter of them had doctoral degrees. However, Indians have a greater presence in software and managerial positions and are largely in executive positions, and the Chinese in technical, non-managerial positions. Writing software is the Indians' forte, while the Chinese have greater presence in firms making semiconductors, computers and communication equipment.

"Tibco, Juniper Networks, Amber Networks, Sun Microsystems, Brocade Communications are some of the Silicon Valley-based firms with management and large ownership stakes by Indians and employing a lot of Indians," says Dossani. "But a company not founded by Indians but with many Indian employees, including many in leading roles, is Adobe," he adds. Adobe makes the popular software FrameMaker, Adobe Photoshop and Adobe Acrobat. Start-ups like TeraBurst Networks, Ikanos Communications, Santel Networks, Teja Systems, Rapid5 Networks, Gric Communications, Stratum8, Ingrian Networks Inc, Centrata, Atesto, have either been founded by Indians or have Indians in the upper management.

The traditional route to the US was via higher education. That changed when the H1B quota was upped. India now heads the list of countries with the maximum number of H1B visas approved for skilled workers to the US. For many of these, California was the first choice of destination. Medha Nanal came on an H1B visa and is a permanent resident now. She says: "I did not come through the traditional channel of education. I did not have to go through financial hardship."

But things have changed. Arun Venkatachar, manager (R&D), Synopsys, and Sharma Podila, software engineer at Sun, who got their Master's degree in Computer Science at Louisiana State University, say: "We don't see much benefit in doing a PhD as the return on investment is low. You lose five years and start off like the others."

The survey also found that "both Chinese and Indians prefer to work in small firms but Indians and Taiwanese are more entrepreneurial than mainland Chinese—43 per cent of Indians and 31 per cent of the Chinese work in firms with less than 100 employees".The hypothesis was that educational differences should affect occupations. One reason Indians have a greater presence in executive/ manager positions can be "the edge from our education in English", says Poornima Kasargod, senior software engineer at Tibco. "What can you do for me today is the questions companies ask you," says Atul Batra, software engineer at iPlanet, and a classmate of Venkatachar and Podila. "This is where communication skills are important, since you have to sell yourself." Batra adds: "We are very lucky since we learn and speak English from a young age."

The Chinese have their strengths too. Says Venkatachar: "Indians in general don't come with a hardware background. Both mainland and Taiwanese students come with a basic grip on hardware knowledge. Plus, the feedback mechanism and success stories in their communities have been more on the hardware side." But there's easy money in software. Says Geeta Hiremath, ASCI designer engineer at a start-up, "You don't have to be an engineer to become a software engineer. The set-up time and hold time for a software engineer is less. People who came from India during the boom made more money than I did with a Master's from the US."

Shantanu Mitra, marketing director, TeraBurst Network, and Piyush Sevalia, marketing director at Ikanos Communication, moved from well-known Silicon Valley companies to start-ups with under 100 employees. According to Mitra, "spending several years with a large company in Silicon Valley is a great way to learn the ropes in a real-life environment. It prepares one for a productive role in start-ups". Adds Sevalia: "Working in a smaller firm offers more: of independence, responsibility, wealth and scope for impact. But it is much more risky too." The drive to work for smaller firms, he says, stems from the "immigrant" mentality. "What this means is they want to get ahead in life, economically, professionally, and socially, and are willing to take risks to achieve their goals."

The study also found that 89 per cent Indians and 76 per cent Chinese worked in firms set up by someone from their region of birth, suggesting that informal networks provided employment connections too. While formal networking helps, it ranks below other forms of networks that include friends and family and business associates. "Going to school together builds lifelong bonds and this leads to a willingness to go out of one's way to help," says Prof Rajeev Motwani of Stanford University. He should know: his graduate students founded search engine Google, and he is a member of their board. "Certainly the old IIT and new TiE connections are critical. But equally important are the Berkeley and Stanford connections," he adds.

The survey also found that "the brains could circulate". Many respondents indicated they'd like to return to their country of birth. Bangalore and Shanghai were the most favoured destinations. Podila says: "I've been toying with it since my cousin moved back after 13 years. It isn't the everyday issues that matters but 20 years from now, can you send your children to Stanford? Can you afford it? are the questions. If I go, I know I'll come back." Some like Batra also want to go back on a temporary assignment.

Points out Dossani, "The survey confirms several popular views about the contribution of Indian and China-born immigrants. That is, they are highly educated, entrepreneurial and derive important benefits from their networks". But formal networking was less important than friends and colleagues. When Hiremath's firm shut shop last year, she worked her friends-and-colleagues network and landed a job in two days. Venkatachar says that when he joined a firm, the first thing he did was to identify an Indian within the company to clarify some questions he had."Networking helps set our goals. If I know of people who have succeeded from my hometown, I feel if he can succeed, why can't I?" he says. So it certainly helps that the Indians and Chinese are in large numbers and are able to build private networks to climb up the corporate ladder.