A stampede in a flood relief camp kills 42. Is this enough to wake up the babus? Updates 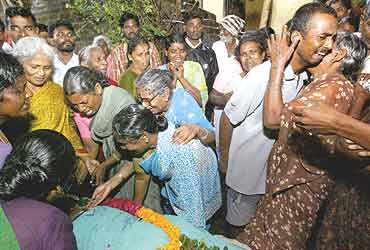 With the seven-party Democratic Progressive Alliance led by the dmk demanding chief minister J. Jayalalitha's resignation, and the police arresting a DMK councillor for "spreading rumours that caused the stampede," the December 18 incident has assumed a political colour. The very venue of the Sunday stampede bears a heavy political burden—the school into which people clamoured to gain entry at 3.45 am is called Arignar Anna Corporation Higher Secondary School; located in MGR Nagar, it is part of Kalaignar Karunanidhi Nagar (KK Nagar). Twelve of the dead belonged to the Annai Sathya Nagar, part of MGR Nagar. The long shadow of Dravidian politics—Annadurai, MGR, MGR's mother (Sathya) and Karunanidhi—hovers on this urban settlement.

But the stampede has raised some basic questions about the functioning of political democracy. Asks Ramzan, a resident of MGR Nagar: "When we vote, there's so much bandobast. There are barricades and ropes. More than 10,000 votes are cast in a single booth without incident. Why is it that we must die such ridiculous deaths when it comes to collecting relief?" Her neighbour Usha pitches in: "On polling day, they come to our doors and remind us to vote; they even take us to the booth. So why can't they distribute the damned tokens at our homes? And why don't we find a single elected representative at these relief distribution centres?"