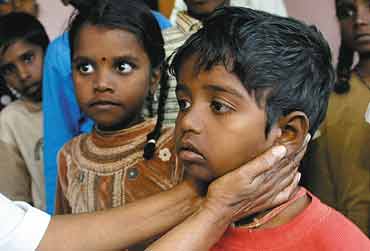 outlookindia.com
-0001-11-30T00:00:00+0553
For the lakhs of people who faced the shock and horror of the earthquake and tsunami, but survived, the hard times may only be beginning. Catastrophes always strain one’s capacity to absorb shock, and a disaster of this stupendous scale can bring about unimaginable and lasting psychological trauma.

It’s normal to be terrified by such events. But for many, the reactions are far worse. Says Amit Sen, psychiatrist at Delhi’s Sitaram Bhartia hospital, "Shock, panic, bafflement are the first outcomes. Then either numbness or agitation takes over, followed by post-traumatic stress symptoms like nightmares, flashbacks, panic attacks, maybe blocking out the incident, insomnia, and finally depression."

The latter symptoms can last for years, and it’s easy to see why they can utterly destroy a person’s life, damaging self-esteem, creating behavioural problems and compromising effectiveness at work. Vijay Chandra, WHO’s Southeast Asia regional advisor for mental health, explains: "If untreated, people perform at a lower level, while their society tends to become less nurturing and productive."

That is why psychiatrists and trained volunteers are already reaching out to people who quite literally had their worlds turned upside down in a matter of minutes one Sunday morning.

B. Nithila is programme manager, disability, ActionAid, and is part of an emergency team working in tsunami-hit areas. "Many need professional treatment to recover from the psychological damage resulting from experiencing an overwhelmingly traumatic event." ActionAid plans to have experts from the National Institute of Mental Health & Neuro Sciences (NIMHANS), Bangalore, as well as other counsellors and child therapists, train volunteers on the ground. "They’re the ones who’ll provide psychosocial support."

The health ministry, following WHO advice on the mental health of tsunami victims, will send ten teams, each comprising a psychiatrist, a sociologist, a senior student of psychiatry and a social worker to the Andaman and Nicobar islands, Tamil Nadu and Pondicherry to assess damage. It is also working with mental health institutes like NIMHANS in Bangalore, PGI in Chandigarh and Chander Institute in Ranchi. Experts from NIMHANS who have dealt with the psychological after-effects of the earthquakes in Latur (1993) and Gujarat (2001) are already working with tsunami survivors.

That experience suggests they have an enormous task before them. In fact, the immediate help that can be provided is fairly straightforward, even if the symptoms shown by survivors can be quite alarming (see box). The WHO recommends ‘psychological first aid’, a mix of empathy, support, counselling and provision of basic physical needs that can be done by volunteers with just a little training.

It’s the long-term scenario where things can go wrong. The WHO’s Chandra explains that the grieving period, which is usually three to four weeks after the catastrophe, represents an important window of opportunity to offer effective care with lasting positive impact: "As the victims of catastrophes try to re-establish the patterns of their lives, mental health intervention can be most useful."

Such mental healthcare needs to be sustainable. Help from the victim’s own community can be more salient, almost organically so. That’s why Sen says, "The thing to remember most while planning on mental health rehabilitation for those traumatised by disasters is that the mental health experts WHO go in to help must train the community in continuing with the counselling. Local doctors, nurses, teachers, members of the community must all be tutored in the counselling and care. Consoling, listening, sharing, talking must all be part of an ongoing mental healing process."

The experience of the survivors of the Latur quake, which killed 11,000 people in September 1993, underlines why Chandra’s and Sen’s points are so important. More than one-third Latur quake survivors still experience mental distress and 65 per cent say they have not got back to their normal lives, according to a NIMHANS study conducted there in 2003, ten years after the earthquake. One survivor in ten still has suicidal thoughts, adds the study.

Likewise, though a lot of physical rehabilitation has been done for the survivors of the Gujarat earthquake of 2001, social workers in the region say that major emotional scars still remain.

Psychiatrists in tsunami-affected areas say they are seeing acute stress and grief reactions, with people suffering nightmares and disturbed sleep. Many mothers who have lost children, children who have lost siblings and survivors whose rescuers died are also experiencing survivor guilt.

Others are experiencing stress reactions where they are haunted by tsunami images and see vivid flashbacks of the moments when the waves struck and are experiencing psychosomatic aches and pains. They are restless; even normal sounds, like a train passing, scare them. "Many of them are avoiding facing the loss. They don’t want to go back home or see their damaged boats or go back to sea," says Varghese Punnoose, a psychiatrist who has been counselling survivors in Kerala. "These fishermen have grown up believing that the sea is Kadalamma or the sea goddess who will take care of them. With such deep held beliefs broken, their psychosocial environment is shattered."

S. Nambi, a psychiatrist who has been counselling survivors in Tamil Nadu, says, "At this point, the only thing we can do is to listen to them, they need to express their horrific experiences. If we facilitate this natural grieving process, then only a few people will experience post-traumatic stress disorder."

Despite this, doctors are keeping a clear eye out for the months ahead, when deeper problems like post-traumatic stress disorder, depression, substance abuse and suicidal ideation set in. "In Kerala, suicide rates are high anyway, we are concerned that this episode may further egg people in that direction," says Dr Punnoose.

Children present their own unique problems. As Sen says, "It is always more difficult for children to deal with such trauma. The foundation of security and unconditional love that their growth and development are based on is shattered, and so unexpectedly. But if corrected early, children can bounce back much quicker than adults." Professor K. Sekar of the Department of Social Work, NIMHANS, who is currently working with tsunami-affected people in Chennai and Cuddalore, describes activity-based models of psychiatric care that help traumatised children gradually find normalcy.

As for adults, he says, "There are seven basic techniques depending on the type of reactions from them. These are ventilation, active listening, empathising, rebuilding support systems, spirituality, externalising interests (that is if women know how to cook they should be involved in community kitchens, if men know how to repair boats they should be allowed to do so, what is happening now is that we are supplying them with food packets and sending in experts to repair their boats) and relaxation and recreation."

Whichever technique is used, it is clear that volunteers from local communities are a critical piece of the rehabilitation process. "Communities should be involved in relief and rehabilitation work because it is a powerful and empowering process for its members," says Prema Rajgopalan of Swayam Shikshan Prayaog, which works extensively in Latur.

Harish Shetty, a psychiatrist who has worked with survivors of several disasters, says that local volunteers may sometimes be more valuable than professionals, particularly in days after the disaster. "Local volunteers with a little training can understand people and their problems better and they can stay with their problems for longer, which is very important. "

As the survivors of the calamity pick the pieces of their rudely broken lives, they may find that the greatest help in the years to come may well come from within their tribe.

By Saumya Roy and Soma Wadhwa with Smita Mitra, Shobita Dhar in Delhi, Sugata Srinivasaraju in Bangalore and S. Anand in Chennai and Nagapattinam