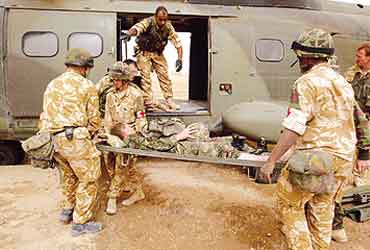 outlookindia.com
-0001-11-30T00:00:00+0553
The war opened when no one expected it: at first light. President Bush’s deadline for Saddam Hussein to leave Iraq elapsed at 4.15 am Baghdad time. At the forward headquarters of US Central Command, on a dusty army base in this Persian Gulf emirate, soldiers waited anxiously by the TV until the sky began to go from black to blue; then relaxed, figuring the bombing would hold off another day. Suddenly, sirens sounded over Baghdad. As news came that US missiles had targeted senior Iraqi leaders, Sgt Chinena Smallwood, 30, allowed herself to dream the war might be over before it started. "We could all go home now," she said. Jennifer Villanueva, who maintains Patriot defensive missiles with Smallwood, shook her head. "It’s too easy."

A week later, it seems Villanueva was closer to the truth. It’s still unclear whether Saddam was killed that dawn. But for US troops, the war has evolved into a trudge through sandstorms, fierce battles and the absence (so far) of the joyful Iraqi crowds they’d expected. In the Joint Ops Center here, a trailer-like building where US military planners track every warplane and every troop formation on computer screens, usaf Major Andrew Schaffer is a bit wistful for that first day when he listened as planners retargeted Tomahawks to aim straight at Saddam. Since then, he has also been in the ops centre for one piece of bad news after the other: five US soldiers from a Patriot missile supply crew taken prisoner. Nine Marines dead in ambushes after Iraqi troops pretended to surrender, then attacked. And the tragedy that touched Schaffer, 33, most personally: he was one of the air specialists who figured out why a British raf jet disappeared over the Kuwaiti border—a US Patriot missile accidentally shot it down.

And that was all on one shift, Sunday. Still, he is confident. "Last night was a lot better than the night before," he said on Monday, after news that US forces had defeated more rearguard attacks around Najaf and Nasiriyah and destroyed Iraqi equipment. Gen Tommy Franks, commander of US forces, points to successes: US and British troops have moved with lightning speed to within 80 km of Baghdad. Hundreds of Iraqi soldiers have been killed, with casualties to coalition forces still hovering somewhere below 50.

US Lt General John Abizaid, tasked with responding to reporters’ questions on Sunday, reacted with pain over the choice by Arab stations to re-broadcast Iraqi TV footage of the twisted bodies of ‘executed’ US soldiers. He seized the moment to emphasise his own Lebanese heritage and the US pledge that it is fighting on behalf of Arab interests. "I would say, as a person who has studied the Arab world and loves it, that the majority of educated Arabs I talk to know that Saddam has been a plague on the Arab world and on his own people," he said.

That’s a moot point. In Basra on Thursday, British troops were reporting signs of an uprising, saying fear of threatened executions were keeping people from welcoming the British troops. Overnight, a column of Iraqi tanks was reported fleeing the city; British commander Air Marshal Brian Burridge said they were Iraqi regulars forced back into their tanks by commanders who threatened to kill their families. But he took a barrage of questions from reporters who wanted to know why, if they were so disgruntled, the troops didn’t turn the tanks on their commanders. He said, "I don’t do details."

At the media center, ringed by razor wire under high security, reporters are getting increasingly frustrated. Qataris in white robes, Japanese cameramen, US and British reporters alike have struggled to get the real picture. In recent days, sandstorms like the one in central Iraq enveloped Franks’ HQ here. Hot wind like a hair-dryer blew car doors shut and blasted eyes and clothes with yellowish grit. It seemed to symbolise the difficulty, in war, of finding clear answers.

(The author is a reporter for The Boston Globe.)

Taking It To The Streets