Dusk Of The Hooves 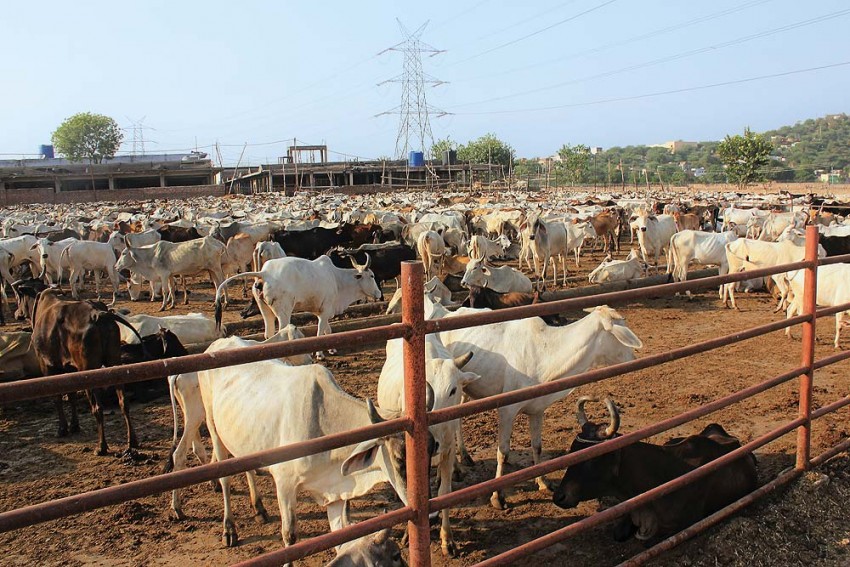 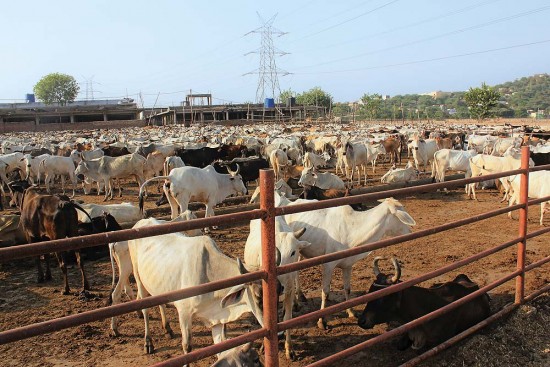 The Maan Mandir Seva Sansthan ashram is located on top of the Gahvarvan hill, near Barsana in Mathura. It’s home to 35,000 cows, mostly well past their prime. The gaushala is the largest in the region, perhaps in the whole country. Ramesh Baba, an octogenarian, came to Barsana some 60 years ago, and never left. He is now confined to a room with glass walls on the top floor of the ashram he set up. It gives him a bird’s eye view of the expanse below, terrain that cowherd Krishna is said to have roamed in mythology. Baba is seated on a motorised chair, a throne of sorts, and visitors are obliged to sit on the floor.

“Robert Clive built the first slaughterhouse in Bengal in 1760. At that time Bengal had more cows than humans.”
Ramesh Baba, Maan Mandir head

This is Krishna country, where cows are worshipped, and the baba is their self-appointed saviour. Assisting him in this endeavour are 500 young men, mostly from Gujarat, who came here some 10 years ago. Right now, his disciples are busy organising the annual Radha-Rani Brajyatra in which thousands of Krishna devotees participate. Sunil Singh, a local, became baba’s disciple when he was 10 years old, and now manages the ashram. The sansthan, he boasts, has nine licensed rifles, to protect cows. In this area, cowsheds spread over hundreds of acres house thousands of cows. Maan Mandir’s decree is law in the area. Cow slaughter was banned here long before any formal announcement. Yet. Baba and his followers openly admit that cows are stolen and sold routinely to agents by Hindu boys for commercial considerations.

Welcome to India’s cow belt. Here, cows are objects of worship but equally prone to be stolen and slaughtered, despite official bans and cow protection gangs. The stealers, and the sellers, are often young Hindu men. They steal older cows, oxen and male calves, and sell them in the open market. It’s strictly an economic compulsion: they get between Rs 1,500 and Rs 3,000 for a cow, depending on the health of the animal and other factors. Buffaloes fetch twice the money, and a dead cow is worth thousands of rupees. There are, in fact, full-time agents in the region. The not-so-well-off dairy owners and farmers lack the resources to tend cattle that’s past milking age and so leave them to fend for themselves. Some, however, do sell them directly to butchers and tanneries.

Despite the ban on cow slaughter, there is a thriving trade in cows. They are smuggled out routinely into the neighbouring states of Haryana and Rajasthan. Sunil Singh recalls how a teenaged boy was caught stealing cows. “He’d do it with impunity, one every day,” says Sunil. People got suspicious, he was caught red-handed and confessed to have sold many calves to smugglers from Haryana and Rajasthan, mostly Muslims, but also some Hindus. The ashram has its own way of dealing with the miscreants. “When we apprehend a miscreant, the matter is not reported to the police,” he says. “Instead we give culprits danda or punishment.” The boys, says Sunil, carry fake documents of ownership and transport cows in closed trucks, dead or alive, across the border. The boy who was apprehended was fined Rs 50,000. “We didn’t keep the money with us, instead we gave it the head of the village where the boy hailed from, with clear instructions to use the money to repair a local temple.” With a note of regret, he adds, “But the theft still continues, on a daily basis.”

However, nothing stirs extreme Hindu passion like cow slaughter does in the UP heartland, where cow worshippers can kill over cows, particularly if the perpetrator is Muslim. As happened in Dadri, not far from the national capital, where mere suspicion (which turned out wrong) of a Muslim eating and storing beef resulted in his murderous lynching.

“The life of a cow is precious and has to be protected, it seems. But what about the life of a Mussalman?”
Haji Jamiluddin Qureshi, Educationist

At the heart of this conflict is unqualified hypocrisy and the politics of polarisation of votes to foster power. Here is how it works. Unlike in the West, there is no distinction in our country between dairy cattle and beef cattle. Beef is banned in UP, so consuming beef is a crime. But as the vice-chancellor of the Aligarh Muslim University, Zameeruddin Shah, asks, “Is buffalo meat considered banned?”

Mathura SSP Rakesh Singh confirms that with cows being bred mostly by Hindus, the trade in cow parts cannot happen without their connivance. He is of the firm opinion that cow slaughter should be treated like any other crime—murder, rape or robbery—and must be prevented. The practice is widely prevalent in the Hindi heartland where it’s not difficult to procure beef, but it does not always lead to communal incidents. If the buyer is Muslim and the seller Hindu, and they agree mutually on the transaction, there is never an issue. Cow slaughter, for instance, is rampant in neighbouring Sambhal district. But when miscreants and trouble-makers want to whip up politically inspired communal frenzy, there’s nothing like cow slaughter to rally passions around. The Mathura police has shortlisted some 50 miscreants in the district who form vigilante groups, have political clout, and are sometimes known to throw carcasses in public spaces, and spread rumours through social media tools like Whatsapp. Exactly the script the incident in Dadri played out to.

“When we apprehend a miscreant, the matter is not reported to the police, instead we give the culprits danda.”
Sunil Singh, Ramesh Baba’s disciple

Police sources in the area say that the government’s plan to use the internet as an alternative infobahn that would integrate urban and rural India also has a dark side. A platform to connect people can as easily be used to foster and spread communal unrest, especially in rural areas, where ignorance, superstition and lack of education form an incendiary mix. A senior official in the UP government, who has dealt with many of the recent communal flare-ups, says the best way to deal with and defuse such communal sensitive situations is through prompt police action and registration of FIR. This was the case last month in Agra’s Shamshadbad, where a Hindu youth had put up a Facebook post in Hindi vilifying Prophet Mohammed. It soon became viral on Whatsapp. The youth was held by some Muslims and taken to the local police station, and a big crowd gathered from both communities. The police, however, lost no time in registering an FIR, and the issue was successfully resolved, before it flared up.

“We have lived in perfect harmony for centuries,” says Aslam Qureshi, head of the Idgah mosque in Agra. Qureshi also holds parking contracts for the whole of Agra and is the informal leader of the community in the city. “The common man doesn’t want conflict but then they are the ones who suffer the most in communal clashes,” he adds, seated by a police post at the Ramlila Maidan coordinating arrangements for Dussehra, with Taj, the monument of love, rising in a forlorn backdrop behind him. Talking of cow slaughter, he says many Hindus supply cows for slaughter. Some gaushalas sell non-product­ive cows to traders from other states. It’s an open secret, he says.

“The common man doesn’t want conflict but then they are the ones who suffer the most in communal clashes.”
Aslam Qureshi, Head of Idgah mosque, Agra

But the times are uneasy. The Dadri lynching and the concerted bid by right-wing groups to reconvert Muslims in the last one year has vitiated the atmosphere. Muslims feel marginalised, unsafe, and see a threat to their faith. That is causing a sense of alienation, especially among the youth. This is a sentiment villagers express in Mathura, Agra, Aligarh; students at amu, fruit vendors in Bulandshahr and barbers in Sambhal. Haji Jamiluddin Qureshi, who runs Mus­lim educational institutions in Agra, sounds anguished. “The life of a cow is precious and has to be protected, it seems. But what about the life of a Mussalman?” he asks. Shah agrees there is a growing divide. But as he sees it, the real issue is not cow slaughter but lack of education. “I’m an educated Muslim. I’m sheltered. I never feel discriminated against. The discrimination is against the less educated, and Muslims as a community are less educa­ted,” he says. “The government has no business imposing dietary restrictions; no individual can take vigilante action.”

Evenings in this part of the country are called gaudhuli bela, that time of day when the cows come home, raising dust in their wake. The cow is kicking up dust again, heralding perhaps a dusk for tolerance and brotherhood of men.