Dunk Us All Into Liquid Oxygen

The so-called seekers of systemic reforms want agreement on everything—else, we are corrupt! 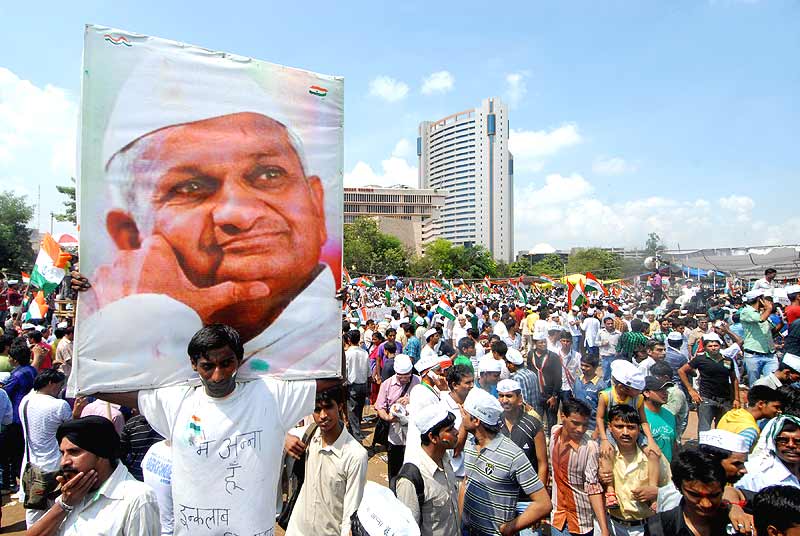 As a young boy, when I voiced my interest in a political career, it was received by my elders with considerable dismay. As a family, we had a peripheral involvement in public life but not quite in electoral politics. Although an uncle had contested for the Uttar Pradesh assembly, my own father did not run for a Lok Sabha seat till 1984. Those were relatively easy times for the Congress, in Uttar Pradesh and elsewhere. The late Rajiv Gandhi was an icon who attracted my generation—which otherwise thought of becoming doctors or engineers—to politics. Having stood my ground about taking up politics as a career, in 1989, the year of the shilanyas in Ayodhya, I stood for election to the Lok Sabha. An eventful roller-coaster ride had begun; I haven’t been able to get off that roller-coaster.

My years in politics have been tough, with a few comforting moments. Along the way, the Congress has suffered devastating blows—election defeats, the untimely, tragic deaths of outstanding leaders like Rajiv Gandhi, Rajesh Pilot, Madhavrao Scindia and Jitendra Prasada. Would our politics have been different if they had all lived on amidst us? Their memories remain a great inspiration even as their succeeding generations and inheritors of their traditions continue to enrich our national landscape.

The most valuable tradition of the Congress, right from Gandhiji and Pandit Jawaharlal Nehru all the way to Lal Bahadur Shastri, Indira Gandhi and Sonia Gandhi, has been to draw enlightened persons from all classes and backgrounds to the fold of the party organisation. Rahul Gandhi is determined to advance and invigorate that tradition. But the stench and the viruses that have overwhelmed politics of late will put a question mark on that endeavour. Why will good people come into politics? Is the noblest profession really gasping its last? Why should young men and women be drawn to a morgue full of battle casualties?

No society or nation can survive without a dream, although that is a necessary but not sufficient condition for survival and prosperity. The dream is what draws idealistic young men and women to politics; without it, even the candidates become suspect as politics becomes commerce. Therefore, whilst it remains incumbent upon the establishments of political parties and governmental institutions to preserve the dream, it is equally important that, in the name of participatory democracy, the dream is not cynically destroyed.

Not for a moment should my position be thought to be seeking immunity from accountability. Ipso facto treating it as such would mean reluctance of the adversary to join in an open debate—the essence of democracy, in whose name many self-opinionated, harsh, even irresponsible positions are being taken. Let me say it with all the emphasis at my command: We stand for the fullest transparency and accountability. But the question remains: how, when and to whom? The rule of law must prevail; kangaroo courts of street justice must not be mistaken for justice. Read Robert Bolt’s A Man for All Seasons, on the life of Sir Robert Moore, and you will know what I mean.

In recent months, we have been accused of policy paralysis (sometimes by the very persons not willing to allow policy to be pronounced). At the same time, every act of policymaking is being questioned for corruption. The term “misuse of office” is now equivalent to the use of office in any manner unacceptable to the accusers. Any benefit to any person or group is now automatically suspect. The logic of loss to the exchequer now dictates that all tax concessions add up to a criminal loss caused to the state fiscal; incentives and stimulus packages in the time of a slowdown are considered criminal.

If nothing else, one can always be accused of pandering to voters! The Supreme Court is persuaded to consider the presidential reference on policymaking, but before we have the benefit of its judgement, the wise men and women of civil society have already pronounced the verdict: guilty. And beware anyone who might think otherwise; if it is the law minister, it is misuse of office! Thoughts and words are a crime to be controlled, not by government, not by courts and judges, but by a mythical Lokpal and some handpicked oracles of self-esteem and virtue. If Parliament plays ball it is good, but if it differs or defers, it become bad. If the Opposition goes along in the hope of scoring political points, it is feted, but if it exhibits caution or enlightened self-interest, it get the same brush of black paint. If judges go along, they are given lifetime laurels of virtue, but reluctance to be bulldozed takes them on the short road to condemnation and ridicule.

The government went the extra mile to seek a meeting point with Anna as it was serious about fighting corruption. We don’t want to be persuaded that was a mistake.

All my life as a lawyer, I understood that the Constitution was sacrosanct and amendments to it were difficult to legislate. Furthermore, the Supreme Court added the gloss of “basic structure”. Similarly, for an independent judiciary, the Constitution, as interpreted in the judges’ case and the presidential reference, prevails. But I must not accept that the judiciary is not independent, and perhaps the president should consult the self-appointed inquisitors of India rather than the chief justice and the collegium. What to speak of the CBI? If any of us disagree with certain positions, it is an act of corruption, not even just impropriety. If we agree with their position, it is proof of complicity. Think now of the police and the civil service as their masters’ humble servants! Perhaps the time has come to expand the three organs of government to include some more. So the lesson for us is that, ministers must not use their minds, because that is where mischief resides. They must allow the paralysis to creep deep into the cerebral crevices. I am reminded of the line attributed to Bollywood actor Ajit in one of his villianous screen roles: “Put this guy in liquid oxygen: the oxygen will not let him die, and the liquid will not let him live!” Or would the song be sung as follows: “Son, never be a minister till your dying day!”

What then is the takeaway from all this (if taking away will not end up attracting the charge of corruption)? In our commitment to combat corruption, the government went the extra mile to seek a meeting point with Anna Hazare on the Lokpal, much to the chagrin of other civil society groups and Opposition parties. We did it because we cared for the issues and because we cared for Anna. (Sadly cannot say the same for some of the rest who speak on his behalf.) There was a political price, but we do not want to be persuaded that we made a mistake. Substantial advance has been made despite Anna breaking off dialogue. But much more needs to be done, and recent events, by proving the sceptics right, give more reason to be careful with formulations of institutional structures. Meanwhile, as a nation, we need to return to the broader intellectual discourse on governance for our plural society. The natural progress of democracy in our country as well as the maturing of our emergent economy has opened up our decision-making to competition in place of control. Competing interests of business, social groups, land interests, ideological fronts, genders, professions, political aspirations etc can easily grow into confrontation and conflict. Media groups, big and small, add spice to the story. There is less and less scope for an honest mistake. One can either agree or be willing to be condemned. The presumption of innocence is for the vile; not those accused of dishonesty, even if the accusations are less than truthful.

The role of democratic politics is to find a workable arrangement between competing claims, ensuring, in the process, the stability of society. Where this breaks down, we are left exposed to the forces of unwholesome upheaval, even violence. The strength of Indian democracy is our unity in diversity. If the accommodation of legitimate interests is questioned every time, politics will not be a place for angels and idealistic young men and women. Young India will no longer dream, but will suffer the agony of unending nightmares. With the death of innocence in our times, what then will we tell our children? Who will join politics or become a judge? Will we bequeath to generations to come the lost years, because courage failed the good? As W.B. Yeats wrote in The Second Coming:

“The blood-dimmed tide is loosed, and everywhere
The ceremony of innocence is drowned;
The best lack all conviction, while the worst
Are full of passionate intensity.”