The peace pantomime continues. The question is: can we chart a new course? 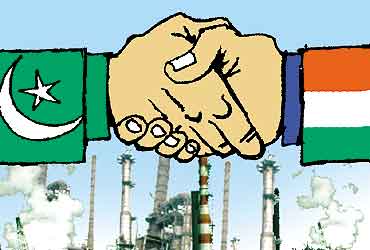 outlookindia.com
-0001-11-30T00:00:00+0553
Were it not so serious, the India-Pakistan peace efforts would seem farcical. Pakistan woos, India disdains. Then India extends a hand of friendship, which Pakistan grabs. Together they sing a peace duet to the accompaniment of a synchronised tap-dance. People on both sides cheer enthusiastically, though in the background the cacophony of naysayers lingers. Then suddenly the song-and-dance pantomime goes out of sync, sounding like a 78-rpm record playing at 33. The melodious duets give way to odious abuse, steps turn to kicks. At the last minute, they pull back from each other angrily, amidst dire threats about "waging a 1,000-year war" and "a fight to the finish". Eventually, acrimony subsides, quiet descends. Then Pakistan starts wooing while India spurns. This saga is repeated with cyclical precision like the absurd daily cockfight between Indian and Pakistani troops at the Wagah border.

Since Prime Minister Vajpayee offered his hand of friendship, we have seen the India-Pakistan peace pantomime go through the same charade. Both Indian and Pakistani leaders make breakthrough statements, only to retract them within days. If they continue to dance to the jaded, failed tunes of the past, this endeavour is also doomed. There has to be a serious and sincere effort by both to break out of old patterns and forge a new course. It requires courage, vision, creativity, skill and will. There is no dearth of these on both sides. The question is: are both equally serious about seizing and then dealing with this opportunity in a new way?

The new way would involve some basic, but not necessarily revolutionary changes: conduct low-key official-level talks, keep the media out, understand the importance of symbolic gestures to clear the atmospherics but focus much more on the substantive issues like strengthening and expanding bilateral ties. New situations demand new approaches. Sticking to old positions is not being "principled". It's being afraid and inflexible, and what's needed now is pragmatism and creativity. If we really want to stop cross-border terrorism, why can't we agree to a credible international monitoring mechanism? How can we pretend Kashmir is not already internationalised?

While dialogue has to be comprehensive, touching on all contentious issues, including Kashmir, it cannot be stymied by Kashmir. Trade must gradually move to the centrestage of India-Pakistan peace efforts. This may be construed as a major concession by Pakistan, but it isn't really. Pakistan benefits as much as India, perhaps more, by opening up trade. Snapping trade links with India is a double blow for Pakistan—the government loses customs levies while smugglers benefit and Pakistani customers pay a much higher price for Indian goods that come clandestinely, often via Dubai. But as past experience has shown, there are powerful vested interests that torpedo trade links because their power and business will be hurt. Unless the politicians and diplomats on both sides have the determination to take on or coax these vested interests, this effort too will fail.

Pakistan has so far refused to follow the India-China peace route. These two Asian giants have made remarkable progress by setting aside the contentious border dispute to focus on strengthening trade and economic cooperation. The results are there for all to see. Pakistan does have a point that the emotional issue of Kashmir cannot be equated with the uninhabited no-man's Aksai Chin. It needn't be. No one is suggesting that Kashmir be put on the backburner. Kashmir has to be discussed, but it must be accepted that it is the most painful and difficult dispute bedevilling the two nations. Negotiations on this issue will be time-consuming and tricky, but that is no reason to allow Kashmir to hold the entire peace process to ransom.While this horse trots carefully, there is no justification to prevent the horses on the other peace tracks to gallop, if and when they can. The momentum generated in the other tracks can perhaps even quicken the pace on Kashmir. So such a tactic would be a win-win for all, provided India and Pakistan are genuinely keen on waging peace on all fronts.

Peace is multi-headed, multi-pronged, multi-dimensional. For it to succeed, peace must become a process, both institutional and informal. For peace to be grounded and become a way of life, people too must have a stake. It takes only a few vested interests to scuttle peace. The key to converting peace efforts from ad hoc events into a process is to give it time. No artificial time constraints can be imposed on it. Politically motivated deadlines have contributed tremendously to the repeated failure of peace efforts in the past. Indian and Pakistani leaders have consistently been vain and shortsighted, putting their personal prestige before national interest. To win glory and go down in history, they have forced a new breeze of friendship, if not a settlement, before their tenure in office ends. This has imposed unnatural and unsustainable deadline pressures on a tricky, fledgling process, spelling doom. Genuine peace is a slow, structured process, starting with laying a strong foundation that is largely unseen by the world, but which is vital if a stable edifice of peace is to be constructed down the line. If Vajpayee is a true statesman, he will ensure that his peace process is strengthened, not hastened. His primary goal should not be to conjure an India-Pakistan settlement during his tenure. Of course, he could be third time lucky. But as a veteran, surely he would agree that what others call luck is often the fruit of pure hard work sustained over years, if not decades.