Musharraf's decided 'in principle' to send troops to Iraq. Now the backlash. 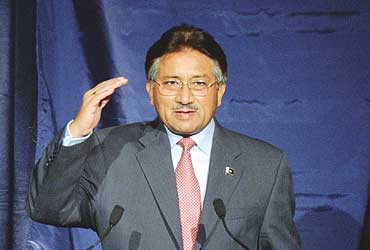 outlookindia.com
-0001-11-30T00:00:00+0553
Neither flexible nor rational, President Pervez Musharraf announced a major policy decision on his "historic trip" abroad: Pakistan, he said, has agreed in principle to send two brigades to Iraq for peacekeeping activities. The unilateral decision, understandably, sent a wave of 'shock and awe' in Pakistan, where not a single prominent voice has been raised in support of the decision.

Says security analyst Gen (retd) Talat Masood: "He has spoken his own mind and maybe that of his coterie including some corps commanders. He is worried also that there will be a tremendous backlash. Whether he finds a fig leaf which is transparent or translucent (to justify his decision), Pakistan will get entangled in a civil war." Adds journalist Ayaz Amir: "I don't think there will be any public uprising. Of course, we will see tyre burning by the opposition but I personally feel we should not even consider it."

But Gen Shaukat Sultan, director-general, Inter Services Public Relations, says that beyond the president's statement, there has been no significant movement on the Iraq issue. "You can say that sending troops to Iraq is under active consideration and meetings and deliberations are continuing. But no decision has as yet been taken," a senior official in the foreign office said.

Government sources, however, told Outlook that the process of enrolling soldiers for a possible flight to Baghdad has already begun. This is a lengthy process, more so because, as the past experience of peacekeeping under the UN flag has shown, money plays a significant role in determining those assigned for international duties. Gen Shaukat Sultan, however, flatly denies that recruitment for Iraq has begun.

One problem the Pakistan government faces is the cost of sending and stationing troops in Iraq. With the United Nations not bankrolling the policing of Iraq, and after the United States' refusal to foot the bill for countries which decide to assist it there, Pakistan might find it difficult to finance an international operation involving two brigades, or 6,000 soldiers.

Obviously, it is wary of India outwitting it vis-a-vis Iraq. Islamabad is already quite nervous at the inroads New Delhi has made in neighbouring Afghanistan through a string of consulates there. But Iraq isn't Afghanistan, and New Delhi's reason for stepping into Iraq is not guided by security concerns.

As Amir points out, "Indian businessmen are already talking about earning $30-40 billion from reconstruction. They are the driving force in trying to influence New Delhi to send their troops into Iraq."

But domestically, Musharraf's decision to send troops to Iraq is unpopular. Says Prof Ijaz Hussain of the Qaid-e-Azam University: "In case troops are sent without Parliament's approval, it would amount to an aggression against the people of Pakistan, just as the American pre-emptive strike without the UN's authorisation was an act of aggression against Iraq." Pakistanis, therefore, favour sending humanitarian help to Iraq, including medical assistance and help in repair of infrastructure.