Could Dubai will go the way of Fatehpur Sikri? A 21st century glass citadel, abandoned like Akbar’s capital... 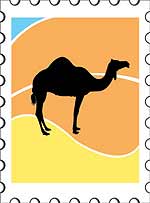 Enter the Sandman The plane entered a blinding yellow sky. I strained against the window to catch something of the approach, but the desert was hazy and featureless. The lady on the seat next to me clutched her stomach and closed her eyes, as if on the verge of a gastric implosion. Then the plane lurched and lowered itself into the burning still life, the city of sand. She turned to me, smiled feebly, and said, “In the desert, you can never tell when you hit ground.”

For several centuries, Dubai was little more than a struggling coastal outpost, a minor colle­ctive of fishing communities that survived at the edge of a real desert, full of cacti, rocky outcrops, shifting sands and daily storms that make every desert setting a yellow daytime nightmare. But now, in barely a generation, the natural ecology of the desert land­scape—rough, parched, pitiless—has been given the opposite lease. Man-made and unnatural to the order of Disneyworld. Des­alinated and air-conditioned like Las Vegas. She­ikh Mohammad bin Rashid Al Maktoum’s super­human effort stretched architectural ideas bey­ond all limits of logic, defying all possible conv­entions. The tallest man-made structure, the Burj Khalifa; the biggest single mall, the Dubai Mall; the largest man-made island, the Palm Jumeirah.