A divided BJP fails to exploit the anti-Gehlot factor 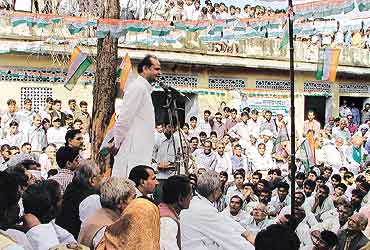 outlookindia.com
-0001-11-30T00:00:00+0553
It's not as if everyone is happy with Rajasthan CM Ashok Gehlot. He carries the burden of four years of successive drought, problems of water, power and employment. But the BJP has failed to channel this undercurrent into coherent, poll-worthy language.

As the campaign lacks a central theme, the outcome is likely to depend on which party has curbed infighting better, distributed tickets intelligently and worked out the caste arithmetic systematically. In this, the BJP state leadership under Vasundhararaje seems to have committed more mistakes than its rival.

This time the BJP was banking on the Jats who comprise about 15 per cent of the electorate. The party's support for the movement for reservation that the Jats launched in the late '90s is expected to pay off. The Jats had all along been with the Congress. But Prime Minister Atal Behari Vajpayee effectively weaned the community away from the Congress by announcing reservation for them at a public rally in 1998, a little after the Jats had overwhelmingly voted the latter in the assembly polls. So, little wonder the BJP bagged 16 of the 24 seats in the 1999 Lok Sabha polls.

The Congress, however, has got back and stolen the reservation thunder, announcing job quotas for the economically backward among the upper castes. Simultaneously, the Rajputs (10 per cent), Brahmins (10 per cent) and Vaishyas (10 per cent) have ganged up against the Jats.

These forward castes, coalesced in groups like the Social Justice Front (SJF) and the Brahmin Mahasabha, oppose a pure caste quota for Jats and demand inclusion of upper-caste poor in the reservation pool. The SJF has fielded 94 candidates and could cut into the upper-caste votebank that the BJP considers its preserve.

Gehlot, however, plays down caste polarisation and says the Congress' agenda is "performance-oriented". Says Gehlot: "I challenge anyone who says we've not performed on crucial fronts like drought management. You try picking up a map and showing me any village where we have not supplied foodgrains and fodder."

But Vasundhararaje, the BJP's rookie chief ministerial candidate, blames Gehlot for "dividing" the state along caste lines. "Our voter doesn't get swayed by such divisive tactics," she says. But she does concede the BJP's mismanaged ticket distribution will impact its performance. Thirty-odd rebel candidates in crucial constituencies add to her anxiety.

Vasundhararaje may defend the ticket distribution as a "revolutionary and democratic endeavour", but senior leaders are unhappy. They claim tried-and-tested candidates have been given the go-by and new faces given tickets arbitrarily. "There are problems," says a senior rss functionary. "We won't work for candidates with a dubious past who are not committed to the party."

An example of the BJP's miscalculation is the Sanganer seat in Jaipur. By denying a ticket to the firebrand Vidya Pathak—a four-time MLA from here till the Congress displaced her last time—it has spoilt its very good chances of winning the seat this time. Actually, the trouble lies with the insecurity pervading the state unit of the BJP. Former power minister Ghanshyam Tiwari, in order to evade defeat once again from his Chormu constituency, decided to shift to Sanganer and ended up displacing Pathak. Pathak is now contesting on an INLD ticket and can only cut into the BJP's votebank.

Other BJP stalwarts who exhibit similar constituency-fright are vice-president Lalit Kishore Chaturvedi, who has shifted from Kota to Digod, Kirorilal Meena (from Bawanvas to Sawai Madhopur) and leader of the Opposition Gulab Chand Kataria (from Bari Sadri to Udaipur).

Despite this, the BJP is expected to gain in the tribal-dominated regions of Banswara, Dungarpur and Udaipur, contiguous with Gujarat's tribal areas.It is here that the rss' Vanvasi Kalyan Parishad has been at work, rendering the area communally sensitive. And Gujarat CM Narendra Modi has been campaigning here for the past one week. The Congress won 30 of the 38 seats here in 1998. Vasundhararaje may deny having anything to do with Modi stoking communal trouble but she's only too glad for whatever help comes her way. "It was not my decision to get Modi to campaign," she told Outlook.

The Congress too has its own share of problems, given the way veterans like Natwar Singh and Nawal Kishore Sharma have manipulated tickets for their families. However, Gehlot has packaged his achievements, especially drought relief, successfully. Unless there are some last-minute reversals, the BJP may find the challenge formidable.