Tehri is sinking. The fledgling state of Uttaranchal faces its first major crisis as the 200-year-old hill town stares at total submergence. Progress, in the shape of one of the highest dams in the world, here means erasure. 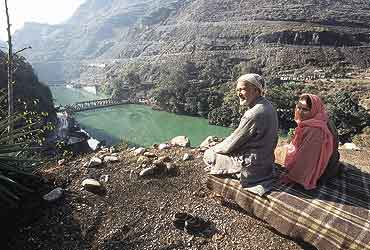 "The government has willed this to be Tehri's last winter," prophesies the town's environmentalist-saint Sunderlal Bahuguna, "But we are determined to fight till the finish, before they drown us out." His own house submerged by the rising Bhagirathi river earlier this month, Bahuguna now strategises Tehri's battle for survival from Purana Durbar, atop one of the town's higher reaches. Gaze lowered on the green waters shimmering in the warm winter sun around him, he makes a cold observation: "This is our water, being used to kill us, then being looted to grow cane in Meerut and flush Delhi's toilets."

Seething with similar anger, locals have been protesting vociferously against the Tehri dam, linked inextricably to the town's death, for over three decades. (As an 'environmental' movement, it grew out of the Chipko agitation of the '70s.) The activism became frenetic after the recent closure of the two diversion tunnels which has, in turn, seen water levels rise to consume the lower fringes of the city. Sixteen months and 60 meters away from completion, one of the highest dams in the world will drown Tehri town and adjoining villages by next monsoon. Uprooting 15,000 families for the larger 'good'.