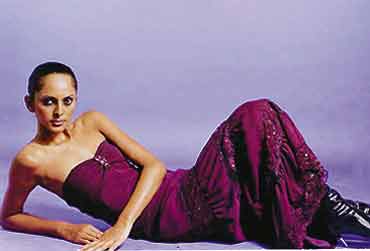 outlookindia.com
-0001-11-30T00:00:00+0553
When Delhi-based model Amit Ralli died on May 12 this year, he was just 10 days short of his 25th birthday. Ralli had already appeared in TV commercials like the Chevrolet Optra ad and was acting in Madhur Bhandarkar's Page 3 as the male lead. Unfortunately, the muscle-building powders he'd been taking to build his body left his system acutely dehydrated. He contracted jaundice. His weakened body didn't stand a chance; he slipped into a coma before dying. 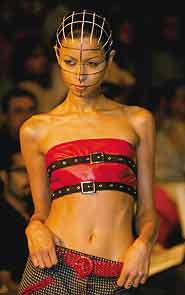 It was a classic case of modelling aspirations gone horribly wrong. Like so many models and aspiring actors, Ralli was taking what he thought was an acceptable risk to get an edge in a profession where looks are your sole bankable asset. However, he didn't realise that such supplements are dangerous if taken without qualified supervision and he paid the ultimate price.

Ralli was just one of the many models, men and women, who subject their bodies to a frightening cocktail of crash diets, nicotine, supplements and stimulants. Near-starvation may help a model look drop-dead gorgeous on the ramp, but the eventual price may have to be counted in terms of a significantly hig-her risk of contracting an array of problems, including assorted gynaecological problems and reduced fertility, dry skin, dental caries, slow reflexes, intolerance to cold, muscle cramps, falling pulse rate and low blood pressure, osteoporosis, reduced life expectancy and irritable bowel syndrome as well as the long-term effects of stress. As nutritionist Dr Shikha Sharma says, "If a woman who's 5'8" (173 cm) weighs just 55 kilos, she is headed for health problems."

It is a problem endemic to the profession the world over. Female models, for instance, are under tremendous pressure to stay thin. International studies show that a female model can weigh 25 per cent less than what she should for her height. Although the Indian modelling industry is not as obsessed about wafer-thin models as its western counterpart, naturally curvaceous Indian women have to do a lot just get on to the ramp. 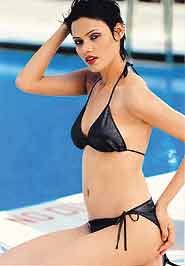 Sharan Mishra, judged the face of the year by Metropolitan Model Hunt last year and now being sponsored by the company in Paris, says she was anorexic during her college years. "I developed problems like acidity so I went to a doctor," she says. Sharan may not actually have been anorexic—a specific medical condition. The pressure to be thin can trigger such eating disorders, but more often it may simply be a case of being unhealthily and unsustainably thin. By upper middle-class Indian standards, Sharan is still rail-thin, but she says she has successfully overcome her problem by following a regimented diet.

To lose weight, models often rely on several risky short-cuts, like eating only gram. "For a few days before a show they may have only juices and energy supplements," says fashion choreographer Aparna Bahl, adding, "As a result I have often seen models passing out." 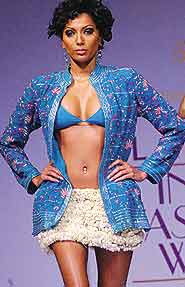 Others may stick to black coffee and cigarettes. Former model Meyhar Bhasin, who now runs her own grooming school, remembers that a top model of her generation survived on the two for three days before each show. More recen-tly, she knows of a newcomer from abroad who starved herself so enthusiastically that "her waist became 18-19 and bust reduced to just 30-31."

Another well-known upcoming model promoted by an international modelling agency says she developed low bp after being asked to lose weight for some international ramp shows: "I was eating boiled food and working out as well."

Male models, though not always subject to the reed-thin ideal, face similar problems. They too have to spend long hours in the gym, but, like the girls, can't always oblige their taste buds. It's usually boiled or roasted food for them.Drinking is restricted too.In any case, they aren't paid anywhere near what the girls get.Ignatius Camilo, a well-known model, says, "A guy pays up to Rs 10,000 a month just to keep fit and gets paid between Rs 3,000-20,000 per show compared to the Rs 20,000-25,000 that female models get."

In this "Page Three" age, models are under the public eye 24x7. There is a lot of pressure and it isn't surprising that some turn to whatever crutch works for them. While doping is definitely discreet, drinking before a show is almost a rit-ual, with designers often providing the models with booze. "Sometimes they get tipsy and trip on the ramp," says choreographer and former model Lisa Verma. 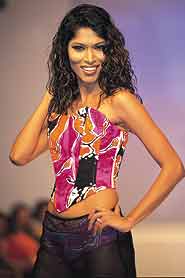 A lot of pressure to stay thin and look good comes from the media and the designers. Witness the hounding of Yana Gupta at the 2003 India Fashion Week, and of Katrina Kaif a little later, for having fat in the "not-so-right places". Both have found their calling in Bollywood where the extra weight wasn't unwelcome.

Former supermodel Shyamoli Varma emphasises the need for designers to encourage models to be fit rather than skinny. A point designer Rina Dhaka agrees with. Grumbling about the sagging abdominal muscles of Indian models, she says, "After the India Fashion Week this year, I took my collection to Miami Fashion Week. And the same clothes looked so different and better on those well-toned Latin American models."

Fitness certainly is a better means to an end than starvation for those genetically blessed with the genes to look stunning on the ramp. And luckily, there is a clear trend towards managing that bankable asset intelligently. Look at Vidisha Pavate, says Prasad Bidapa, who has been grooming models for over 25 years: "She is always in great shape and balances her food intake with her workout sessions."

Right for the ramp doesn't have to mean unfit for everything else.