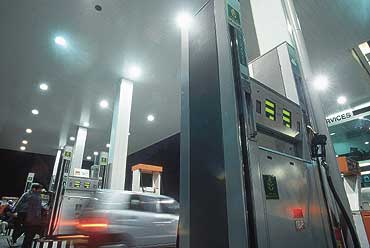 outlookindia.com
-0001-11-30T00:00:00+0553
With the pmo clearing the last hurdle in dismantling the administered price mechanism (apm) on petroproducts last month, bureaucrats are working overtime to end the five-year-long process of deregulation by March 31, 2002.

Since 1976, the apm has compensated oil producers, refiners and marketers on the operating costs and assured them a return on their assets, as prices were kept low (or high) to allow what the government thought was judicious use of the imported high-cost fuel and its products. The pricing mechanism clearly undercut efficiency but encouraged a massive expansion of oil infrastructure by underwriting investment risk. What shape will the oil economy take when it's finally liberated from price control?

More importantly, will April 1, 2002, see the beginning of a stiff race between domestic and multinational corporations for transportation, pricing and marketing of domestic fuels, till recently controlled by the state-owned oil and gas companies—ioc, bpcl, hpcl and ibp. And will this lead to subsequent gains for the consumer?

Not immediately, anyway. Senior officials in the ministry admit the first phase would be to push both houses of Parliament to clear the Downstream Regulatory Bill which will put in place conditions for private companies interested in marketing petroproducts. So far, only three private companies —Reliance Petroleum, Mangalore Refinery and Essar Oil—have obtained the ministry's clearance for setting up marketing operations. (The government stipulates a Rs 2,000 crore investment in refineries or 3 million metric tonnes of annual production of crude oil as eligibility condition).

"Once the bill is cleared, it will be relatively easy to put the mechanism in place," a senior ministry official told Outlook. He didn't elaborate on the mechanism but said both the petroleum and finance ministries were working in tandem on the following:


However, since the freight equalisation scheme is also being dismantled, states far from the coast may see higher prices. The consumer price will depend on factors such as proximity to the nearest port, prevailing customs duty, distribution and marketing costs, dealers' commission and state taxes and local levies. To protect consumers in remote areas, the ministry has suggested that freight subsidy be applicable on petrol, diesel, lpg and kerosene in the north-eastern states, Jammu & Kashmir, Uttaranchal, Sikkim, Himachal, Andaman and Nicobar and Lakshwadeep islands. Without subsidy, price differential between the plains and these areas would be as high as Rs 3 per litre and Rs 100 per lpg cylinder.

There are only a few players at this stage, but the ministry expects a significant change once the divestment process for the other two psus (bpcl & hpcl) are over and the bill is cleared. Says the official: "We expect companies to raise refining margins, which is constrained by a fixed rate of return on capital employed stipulated by the government."

Clearly, competition will bring in better services for the consumer? But will the removal of apm translate into other, more concrete benefits to the customer?

Says ioc finance director P. Sugavanam: "I think the focus will be more on infrastructure set-up and how fast companies manage that. The faster you do it, the better. The companies' ability to set up quick infrastructure for marketing will show both their interest and seriousness in the business."

By that count, there's little interest shown by private players yet, barring Shell and Reliance. Experts claim it's because entry barriers are so high that only a few big players can show interest. For example, Reliance Petroleum is eligible because of its investment in the refinery but till date, it has no infrastructure in place. And for a multinational, it's mandatory to give a bank guarantee for making necessary investments over a stipulated period. So the expected has happened: high barriers, few players.

Ministry officials say Reliance Petroleum, with the second largest refining capacity, has demanded immediate marketing rights so that the company gets adequate time to set up infrastructure facilities. Essar Oil has said it has identified 1,700 locations all over the country and wanted to service these through its planned 10.5 mmpta Vadinar refinery (at an estimated cost of Rs 8,000 crore). Mangalore Refinery (with a 9 mmpta refinery) has said that they have identified 1,800 locations for retail outlets. "Barring these three, no other company has submitted concrete proposals," ministry officials said.

Experts agree that the sooner the ministry dismantles the apm, the better for the economy. "This would end cross-subsidisation and enable prices to more correctly reflect the products' scarcity value. If it is accompanied by rationalisation (or removal) of subsidies to a reasonable level, it would reduce incentives for adulteration of transport fuels by kerosene which would improve the quality of air in urban areas," says energy expert Dr A.R. Sihag of the Tata Energy Research Institute (teri). However, he cautions, "It's a necessary step for effective competition. Currently, the barriers to entry in the retail marketing sector are very high. And there is no freedom of entry and exit at the retail outlet level as these are covered under the marketing plan coordinated by the occ. So, while petrol consumers may benefit somewhat through lower prices post-apm, the benefits of competition are some distance away."

Experts feel the final scenario may be something like this: besides realistic prices, servicing at retail outlets would be an important and integral part of company operations.Marketing strategies would also depend on factors like who bags bpcl and hpcl, and also which of the other eligible players e.g. Reliance, ongc and oil are given marketing rights. If all or most players still remain in the public sector, then coordination may be easy and competition may have to wait. Adds Dr Sihag: "When there are a large number of players and entry is easy, there will typically be price competition. With fewer players, cartelisation is likely and there may be some superficial non-price competition (fringe benefits like free air pressure check, water and toilets). Competition will be more intense in urban centres than in remote and rural areas."

For now, no one's hazarding a guess as to when that would happen for fear that the dismantling of the apm may well turn out a Pandora's box.