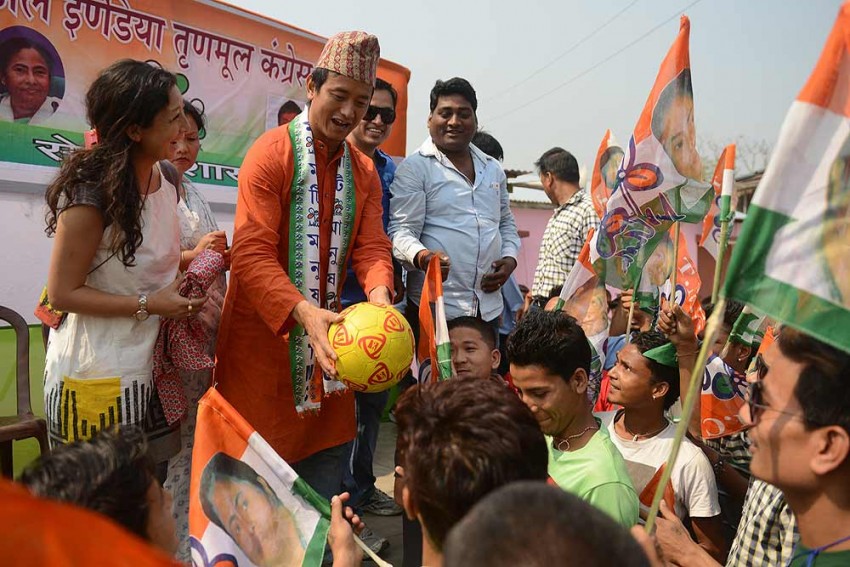 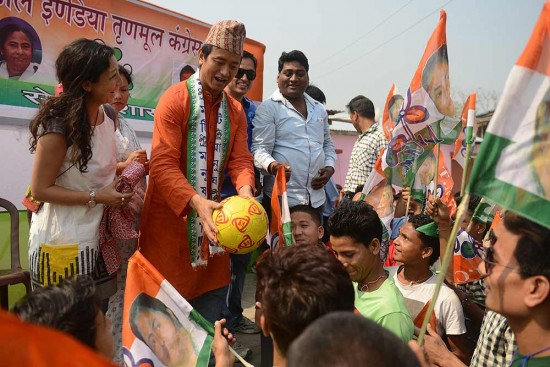 Football stars in India do not enjoy the same status and adulation reserved for their counterparts in cricket. Former Indian national football squad captain, Baichung Bhutia, though, has no reason to complain, being one of the best known faces of the sport in India. Yet, even for a “footballing icon”, political aspirations can be a minefield holding many difficult surprises. This is a lesson the Trinamool Congress, which has fielded Baichung as its nominee for the Darjeeling Lok Sabha seat, is learning the hard way.

His popularity notwithstanding, the fact that Baichung is not a Darjeeling boy and comes from neighbouring Sikkim, is fast becoming an issue in the ongoing election campaign. “Baichung is from Sikkim, he is not from Darj­eeling,” says a young man in Siliguri when asked to identify his winner for the seat.

But if Baichung is an outsider, so is his main rival, the BJP candidate Surinder Singh Ahluwalia (a former Rajya Sabha member from Jharkhand). What makes Ahluwalia a serious candidate though is that he has the backing of the Gorkha Janamukti Morcha (GJM), the outfit that presently dominates the political discourse in the hills.

The outsider issue, though raised from time to time during the campaign, has been done mainly by the others in the fray—the CPI(M) and the Congress in particular. But it does not wash much with the voters of Darjeeling. This parliamentary seat of West Bengal, which has three assembly segments from the hills and four from the plains—including that of Naxalbari, the birthplace of the 1967 Maoist insurgency—has had a history of electing outsiders. In the past Inderjit (Khullar) of the Congress and Jaswant Singh of the BJP have both won the Darjeeling seat, although with the support of Gorkha outfits from the hills. Baichung or Ahluwalia’s ethnicity, therefore, is only a matter of academic discussions.

But what’s drawn the focus of a large number of people in Bengal and beyond to the unfolding contest in Darjeeling is how it has turned out to be a prestige fight between the Trinamool Congress and the leaders of the Gorkha Jana­mukti Morcha. The TMC supremo, chief minister Mamata Banerjee, has herself raised the stakes in Darjeeling by identifying it as a special constituency and has since led a concerted campaign in Baichung’s favour.

Though Mamata is likely to pick up the majority of the 42 Lok Sabha seats in the state, winning the Darjeeling seat has become extremely important for her. For if she loses this seat, it will once again prove that despite her state-wide influence and political clout, it is the GJM leaders whose writ runs in the hills and in much of the surrounding plains. To ensure victory for her candidate, Mamata has also enlisted the support of Subash Ghising, the Gorkha National Liberation Front leader who continues to enjoy support in key pockets in the hills.

In the 1980s, Ghising was the undisputed leader in the hills when he launched his movement for a separate Gorkha state. In subsequent years, he managed to get the Darjeeling Gorkha Hill Council formed after some hard-nosed bargaining with both the Centre and the state government. He also got himself elected as its chairman. But a few years down the line, it all started to go wrong. Corruption and mismanagement in running the affairs of the Hill Council created a space where his former aides like Bimal Gurung and others managed to isolate him and take up the mantle of championing the Gorkha cause themselves. In later years, the Council morphed into the Gorkhaland territorial administration under the leader of Gurung’s Gorkha Janamukti Morcha with more autonomy. However, the demand for a separate state for Gorkhas has not gone away. Indeed, to some extent, it’s been given a fresh lease of life after the creation of Telangana.

Of the 14 lakh-plus voters in the Darjeeling LS seat, over six lakh are in the hills. The Morcha leaders are trying to ensure that it garners the majority of these votes for Ahluwalia. Meanwhile, it’s hoping that despite the TMC’s clout in the plains, the votes will be split between Baichung, and the candidates from the CPI(M), Congress and the BJP. In addition, Mahendra P. Lama, academic and former vice-chancellor of Sikkim University, is also in the fray as an independent candidate. He may succeed in taking away a chunk of the votes, both from the intelligentsia in hills as well as the plains.

To add to the mix, overt calls for a separate state of Gorkhaland have now added a new dimension and edge to the Darjeeling fight. If the demand for separating from West Bengal is a popular entreaty among the Gorkhas, for the same reason it has managed to unite most of the other political parties in the plains. Not only the TMC, but all the others, including the Left parties as well as the Congress, are opposed to the idea of any further separation of Bengal.

The GJM leaders feel the BJP is their best bet in realising a separate state. But the BJP, which has been under sev­ere attack from various political parties for maintaining “double standards” on the issue, has so far remained non-committal and opted to play it safe.

The ambiguity in the BJP stand is understandable. It fancies its chances of winning a few seats in Bengal but knows it will not be possible if it unequivocally supports the demand for a separate Gorkha state. Interestingly, there is no mention of it in the BJP manifesto also, though Morcha leaders claim they have been assured the demand will be taken up if the party comes to power. Ahluwalia too plays it safe. “We have only told the GJM that we will look into their demand sympathetically,” he says in an attempt to stay away from making any firm commitment.

A Siliguri-based senior journalist, Nabendu is the news editor of Uttarbanga Sangbad