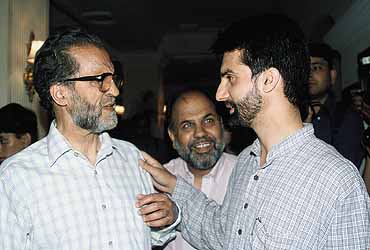 outlookindia.com
-0001-11-30T00:00:00+0553
When news of the invitation to Gen Pervez Musharraf flashed on TV screens in Srinagar on Wednesday night, everyone was taken by surprise. The buzz, earlier that day, was that the ceasefire would be called off. None expected Vajpayee to extend a personal invite to Pakistan's chief executive to visit India and hold talks. The first reaction was optimistic, though laced with scepticism. The doubts arose as all too often the Kashmiri has been held out hope, which turned out illusory. Says Syed Ali Shah Geelani, firebrand Jamaat-e-Islami leader: "It's good if Vajpayee and Musharraf meet to resolve the basic issue of J&K. But such meetings have taken place in the past without producing any result. So when they meet they should resolve to meet with a purpose."

According to one Hurriyat leader, the latest peace effort faces the danger of ending up as a PR exercise with neither side making any commitment vis-a-vis Kashmir. Says Hurriyat chairman Prof Abdul Ghani Bhat: "Talking alone isn't enough. Both India and Pakistan will have to involve the relevant parties to the dispute. This means involving the Hurriyat."

This is the one crucial area of concern for Bhat and other Hurriyat leaders. While in the recent past the Hurriyat has been at the forefront of Vajpayee's peace initiative, doubts are being raised about its role once New Delhi begins direct interaction with Islamabad. Says a Hurriyat leader: "New Delhi has used us and sidelined us. But we hope it recognises that the Hurriyat is the only formation which represents the sentiments of the people in the Valley."

Varying levels of scepticism exists among average Kashmiris too. All agree the invitation is welcome but they aren't too sure how far a meeting between the two leaders will help resolve the Kashmir issue. Says a city lawyer: "Our fear is that once the talks are over, committees will be appointed and a never-ending diplomatic process would be set into motion while militancy will continue in the Valley as before."

Much of the apprehension stems from the Kashmiri experience of the truce, implemented on November 28. After the first few weeks, it ceased to exist on the ground. While militants stepped up their attacks on the security forces, the latter in turn harassed the common folk. Says Jameema, from downtown Srinagar: "My brother was in custody for a week as they thought he was a militant. The army still troubles us. How will Musharraf's visit help?"

The failure to consolidate on the ceasefire and unrelenting attacks prompted members of the Special Operations Group of the state police to resort at times to brute force. Amid the crackdowns, allegations have been rife of fake encounters and custody killings of ordinary civilians labelled 'hardcore militants'. Over 1,033 persons were killed, including 465 militants and 214 security personnel, during the ceasefire period.

Also, complaints of atrocities on citizens had gone up during the ceasefire. As senior separatist leader and frontline Hurriyat Conference member Abdul Ghani Lone says: "For the first month, there was a ceasefire but later it became a fraud. People were being harassed by security forces and some killed in custody. Houses were looted and women raped. Its withdrawal means nothing to us. It was a big joke. The government has done well to withdraw it."

A significant aspect of the ceasefire has also been rejuvenation of militant groups like the Al-Umar and the Jamait-ul-Mujahideen. Further, the groundswell of support slowly building up for such groups was an ominous sign.Proof of this was seen in the huge turnout of people demanding the bodies of the Lashkar-e-Toiba militants involved in the audacious attack on Srinagar airport.

Now the fears centre around the ceasefire being formally lifted. The feeling is that militants would only step up their attacks and the Valley's civilians will be caught in the crossfire between the jehadis and the security forces.

When Vajpayee took the ceasefire initiative in November, despite persisting differences on the future course, it was welcomed by all in the Valley. But having failed to articulate a fresh set of measures to build on this, all forward movement was stalled. From the Kashmiri's bifocals, it remains to be seen if Musharraf's visit will change things. As a university professor notes: "First there was Lahore, then this ceasefire. We can only pray this move will succeed." Everyone hopes the Vajpayee-Musharraf initiative is not just mired in good intentions.