A 10 crore-strong votebank. Parties are going all out to woo the young 'uns. 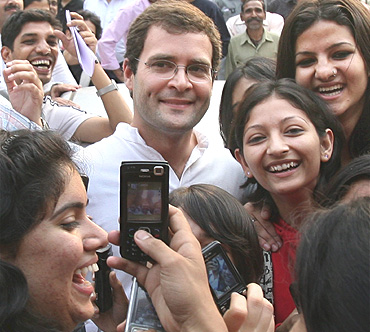 Ten crore new voters, about half of them just out of their teens. As political parties get ready for Elections 2009, campaign managers are looking anew at a demographic behemoth variously described as "young voters" or Generation Next. Which way will the youth vote, how to woo him/her, will he/she vote at all, it's all become the focus of much attention and discussion.

Elaborate plans have been chalked out by the principal political parties to try and corral this 10 crore segment, believed to be 15 percent of the voting population in India. The question is, is the demographic as homogeneous as the political parties would like to believe?

Campaign managers definitely feel so, they're at least sure that the youth in 2009 are more homogeneous than the young of 2004. The key factor has been communication and the resultant "shared ideas", say party pundits. The premise now is that there are greater commonalities in ideas, aspirations and ambitions. As a Congress political manager put it, "If I am looking at a youth from Ballabhgarh (in Haryana) today, he has more similarities with his counterpart in a metro like Delhi or Mumbai. I can now speak to all of them in a language they will understand." Which explains the rush among political parties to create a one-size-fits-all message.

The BJP was quick off the block in launching some "guerrilla warfare" to counter the Congress's Rahul Gandhi and his "youth brigade". The saffron party has identified nearly 5,500 campuses to reach out to 5 lakh potential voters. "We wanted to roll out the Advani@Campus programme so that we could focus on this group and respond to their issues by dealing in specifics," Prodyut Bora, convenor of the party's IT cell, told Outlook.

For this, the party roped in "volunteers" to be their strategic speakers. If the target was an IIM campus, then the speaker was an alumnus with some professional success. Integral to the campaign has been a core plan: catering to the aspirations of today's youth. As Bora puts it, "They are hearing our message from those who have achieved success."

Naturally, technology is of the essence. The BJP has announced an "IT policy" that promises information highways transmitting "massive amounts of data". It's also launching an online social networking site this week. Meanwhile, the Congress is planning to use existing social networking sites. "We are working out a plan where sites such as Facebook will be tapped," Anand Sharma, MoS for external affairs, told Outlook.

Sharma feels that when it comes to the youth, Congress is at an advantage. "We have the most number of young MPs, our party has opened up opportunities that people never had by liberalising the economy. Just look at the numbers. Eight new IITs, seven new IIMs, 20 new IIITs, 30 new universities and 1,500 new polytechnics have been cleared by us," says Sharma, laying down the numbers.

The statistics may sound impressive to the 4.3 crore voters of the still-in-school 18-22 age group. But for others, there's also the fact that the recession has hit lakhs of jobs, something the BJP's "guerrilla" speakers are quick to point out as they address campuses across the country. Rajeev Babbar, Delhi University Law Faculty alumni and a successful entrepreneur, is ready with his spiel, "Look at our record when the NDA was in power. .. after Shershah Suri, we were the ones to provide a major network of roads. But look at what the present UPA has done. While we were making roads at 57 km a day, they are now crawling at 4 km per day." During presentations, taking digs at Rahul Gandhi is mandatory. "He joined St Stephen's on a religious quota. Tell me, is it fair to those who work hard to get admission?" Babbar asks.

But while political parties are trying to realise an amorphous youth identity, traditional community-caste equations continue to be crucial on ground. Parties are also grappling with the twin paradox—young minds are easily impressionable and yet fickle in their loyalties. The youth like to see tangible benefits come to them quickly, but are unwilling to be patient of the twists and turns of a complex political process.

Deepender Hooda, first-time Congress MP from Rohtak, Haryana, shuttles between his nine assembly constituencies trying to address the youth who make up nearly 60 per cent of the voters. The Haryana CM's son, Hooda comes from a traditional political family, but is keen to break with established norms. "Seven out of the nine assembly constituencies are Jat-dominated which helps, but as a leader I want to change that. I want to take caste out of the equation and ensure that development becomes the key."

Not to be left behind, parties such as the bsp have also begun to focus on the young voter. "A sizeable chunk of our voters are in the 18-30 age group. Several measures were taken keeping in mind their needs," Uttar Pradesh bsp chief Swami P. Maurya says. Of course he doesn't forget to add that "the employment opportunities created by CM Mayawati has added some 6 lakh jobs".

But not everyone is impressed, especially those on the fringes among her own constituency. "We are happy that she is building impressive memorials in the name of Bhimrao Ambedkar and Kanshi Ramji; but instead of spending thousands of crores on these, she could have used the money to set up factories where we could have got jobs," argues Awadhesh Kumar, a young jobless Dalit. 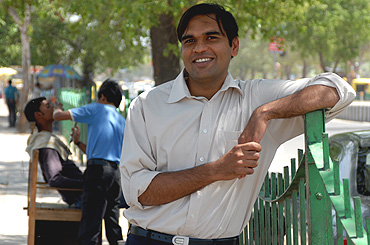 C.S. Krishna, an IIM graduate who interned with the CPI(M) in the summer of 2007, got an insight into the political process. "I saw the social costs of everyday business decisions and policies. I realised then that we have to be part of a greater political process, where we volunteer our time and efforts," Krishna says. His immediate juniors in IIM took the political experiment a step further to work with two Gujarat MPs—the Congress's Madhusoodan Mistry and the BJP's Hiren Pathak—to understand India's complex political process.

Anil Gupta, professor at IIM, Ahmedabad, was a key mentor to the student's efforts to see politics from a closer perspective: "The problem with India's youth is that they are impatient. No one wants to work their way up the system. No one wants to begin as a municipal councillor who can improve his locality. They all want to start at the top."

This year, NGO Janaagraha began an exercise through a web initiative, www.jaagore.com, to register new voters. At last count, they had nearly 5,45,000 new registrations, in part through a successful TV ad campaign. That's the challenge for political parties: connect with the young first, and then figure out how to get them out to vote on polling day.

Saikat Datta In Delhi And Sharat Pradhan in Lucknow