Draw! Dirty Dubya And The Thief Of Baghdad

The swelling anti-war mood among governments and the public forces the US a couple of steps back. An anatomy of what's now seen as its cynical intent. More Coverage 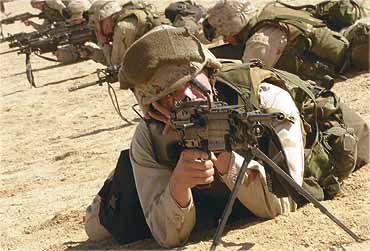 outlookindia.com
-0001-11-30T00:00:00+0553
The moral certitude that defines President George Bush's White House is still there and the faith that he is ridding the world of an evil pervades the sound bites. But the millions of anti-war protesters worldwide have snatched some more time for diplomacy. It is the last window for peace during which Iraq must visibly destroy its presumed chemical and biological weapons as the US and UK make a final push for war through the UN. A second resolution is in the works, declaring Iraq in "further material breach" of its disarmament obligations. Whether it can garner the necessary votes is an open question. A UN imprimatur would give political cover to the needy. Hans Blix, the chief UN weapons inspector who bolstered the anti-war camp with his last report, will present another assessment by March 1. His careful delineation of reality led to an epic battle at the UN, pitching France, Russia, China and Germany against the US and UK.

But Bush asserted that the anti-war protests were irrelevant to his decision on whether to use military force against Iraq. "Size of protest, it's like deciding, 'Well I'm going to decide policy based upon a focus group.' The role of a leader is to decide policy based upon the security—in this case—security of the people," he said in typical Bushspeak of half-sentences and incomplete thoughts. He "respectfully disagreed" with the street verdict, although his tone betrayed a deliberate sneer. But the pressure was evident on his team, which struggled to regain the momentum.

The Q Factor: Al Qaeda and Iraq
Senior US officials repeatedly made the case for war, while talking of an impending terrorist strike. They raised the threat level to "orange" and sent ordinary Americans rushing to buy duct tape and plastic sheeting to seal their homes. CIA director George Tenet revealed his spies had picked up enough "chatter" on the Internet, telephones and through informants that warned of a terrorist bio-chemical attack. The warnings turned out to be exaggerated: one of the informants later failed a lie detector test. But the connection had been made—between Al Qaeda and Iraq—in the minds of ordinary people. In reality, the shrill campaign to impose a continuum between the two lacks credible evidence. Thomas Friedman, an influential New York Times columnist, declared: "You don't take the country to war on the wings of a lie." He accused the Bush team of being "big on attitude, weak on strategy and terrible at diplomacy". In little more than a year, the administration has wiped out the surplus of sympathy it had after 9/11.

The War of Choice
No matter how hard the Bush team tries, its case for war is falling short. It is being seen as a war of "choice", not of necessity, especially because North Korea is flagrantly violating the same norms with impunity. It is abrogating nuclear treaties and threatening neighbours but for Pyongyang so far the medicine is diplomacy. Since last summer Bush has shown an eagerness to declare war on Iraq, giving the impression that the subsequent decision to seek UN approval is a charade. US troop mobilisation is now up to 182,000 in, around and near Iraq, creating its own logic of momentum.

Bush repeated the "weeks not months" deadline as Washington tried to tie up a few loose ends. Turkey was negotiating hard for more than $30 billion as a price for leasing its bases. The unseemly bargaining hardly proves it is a "coalition of the willing". The Pentagon generals, worried about fatigue, don't want to wait forever for diplomats to line up support. To have thousands of GIs in the desert is not a welcome sight for the boiling Arab minds. In some ways, a low-key war and psychological strikes have already started. US warplanes bomb Iraqi air defences almost every day while the CIA and US special forces look for Scud missiles in western Iraq and plant surveillance equipment.In the Kurdish-controlled northern Iraq, US troops have set up small bases to organise tribal leaders. Iraqi military brass is rattled daily by e-mails and cellphone calls, urging them to overthrow Saddam Hussein.

Politics of Oil
But many are convinced that war is being waged for all the wrong reasons—Iraqi oil, hegemony, unproven terrorist links and the doctrine of pre-emption. Oil is a secondary consideration even though much poster paint has been spilled to make the point. But securing the world's second-largest reserves in friendly hands would surely be a rather happy "collateral gain". Iraq sits on a sea of oil with known reserves of more than 112 billion barrels. "The day after Saddam is removed, the Iraqi oil industry is open for grabs and it will depend upon the government of Iraq to decide how it will dispense that resource," says oil consultant Rob Sobhani, a professor at Georgetown University in Washington. Certainly, US companies would be in a strong position to compete for the right. Oil and recovery of old debts are such a huge prize, they could become a consideration for countries when they decide whether to join the fight. All this if Iraqi forces don't set their oil wells on fire which would take years to extinguish and hundreds of billions to rebuild.

The New Doctrine
More than oil, it is the new strategic doctrine that worries people. Senator Robert Byrd, a wizened Democrat, issued an eloquent warning last week: "This coming battle, if it materialises, represents a turning point in US foreign policy. The doctrine of preemption—the idea that the United States or any other nation can legitimately attack a nation that is not imminently threatening but may be threatening in the future—is a radical new twist to the traditional idea of self-defence. It appears to be in contravention of international law and the UN Charter."

But the UN is an albatross Bush's core advisors would gladly toss if not for some saner voices. Washington insiders say the key actors in this administration came into office with Iraq on their minds and the September 11 attacks only confirmed their belief that "pre-emption" was the only way to prevent future terrorist strikes. That a "regime change" in Iraq was necessary to stop terrorists obtaining dangerous weapons from willing dictators. Led by neo-conservatives such as Paul Wolfowitz, Pentagon's No. 2 Richard Perle, an influential defence policy advisor, and helped greatly by vice-president Dick Cheney, they are the "ideas men".

Democracy through Force
They, the "ideas men", have written extensively about the need to exploit America's "unipolar" moment to prevent the rise of any rival power. The UN rarely gets a mention in their treatises. Their grand vision, supported by an array of influential hawks outside, includes a restructuring of West Asia where a democratic regime in Iraq will inspire by example and blow the winds of change over other oligarchies. It will be the dominos of democracy. Representative governments will also help quell anti-Americanism since much of it arises from a belief that the US has supported repressive regimes over the years and thwarted reforms.

The unilateralism of the neocons scares the Europeans and it has resulted in a trans-Atlantic divide bridged only by insults and vitriol. Two years of arrogant rejections of international treaties (Kyoto Protocol, International Criminal Court and the abm treaty) by the Bush boys finally convinced France and Germany to say "No" and refuse to play in the band. But Perle dismissed French objections as cynical and motivated by attempts to make Europe a "counterweight" to American power. "I think we've to abandon the romantic, nostalgic notion of the US and the members of the EU as allies working to achieve a common policy," he said.It's this impatient attitude and dismissive tendency that has brought Bush's America to a point where more people consider it a threat to world peace rather than Iraq. But who is to convince national security advisor Condoleezza Rice, who only last week asked the Security Council to grow "teeth" if it wanted to preserve the peace.