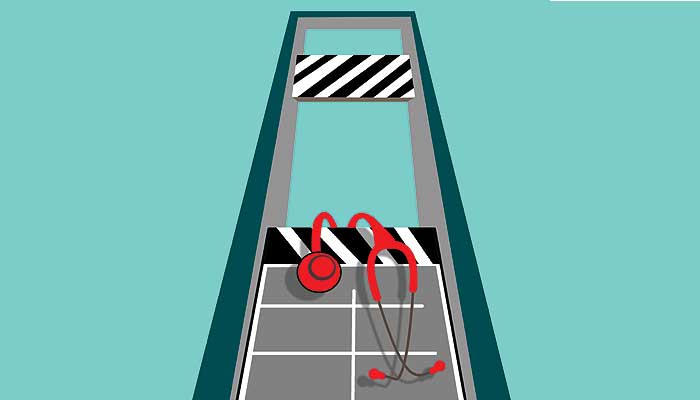 There was a time when tuberculosis was the cinematic sickness of choice. Filmic epidemiology was at that time an underdeveloped field. The trouble was that Nirupa Roy, who was very good at snapping up the tubercular role, was hardly physically tubercular. There was nothing remotely pinched or wasted about her well-fed Gujarati frame. How represented ‘reality’ in the Bombay film suffered on account of Nirupa Roy should be a field of inquiry in Indian film studies.

Somewhere in the 1960s, cancer displaced tuberculosis as the dread disease of cinema. But most “sickness” films contented themselves with fiddling around with disease on the edges of the story, rather than giving it a central role. That changed with Asit Sen’s 1969 film Khamoshi, which also added unipolar depression to the list of celluloid illnesses, and Hrishikesh Mukherjee’s 1971 film Anand, about a cancer patient. Bollywood’s clinical spectrum has since dilated, somewhat alarmingly, to accommodate cardiac transplantation (Red—The Dark Side, Dil Ne Jise Apna Kaha), corneal transplantation (Naina), HIV disease (My Brother Nikhil, Phir Milenge), dyslexia (Taare Zameen Par), autism (Apna Aasman, My Name is Khan) and dissociative identity disorder (Aks, Karthik Calling Karthik). Round the corner is Guzarish (paraplegia following spinal cord injury). There is a possibility that the global resurgence of tuberculosis may revive its movie career.

If we try and locate the doctor in the traditional stereotypes of the Bombay film, we’ll find that—unless played by a megastar—the doctor has always been depicted as a hopeless little twerp who has had, at best, something more or less sincere to say or do during the course of his screen presence, which largely revolves around an intramuscular injection, a pointless bit of fiddling with a stethoscope and facial perspiration during an operation. That continues to this date—consider the Mr Beanish twit in the climactic ambulance scene in Delhi 6! (By the way, no one, with the possible exception of first year medical students, wears short-sleeved white coats.) And medical discourse in Bollywood is limited to invoking divine providence.

It’s also fair to say that over the 70 years that the Bombay film has engaged with modern medicine, cinematic representations of medical processes and hospital chattel have had all the gravitas of a Daffy Duck short. Sample the opening sequence of Manmohan Desai’s blockbuster Amar Akbar Anthony. A much injured Nirupa Roy lies comatose on a hospital bed, perpendicular to the ones occupied by Amar, Akbar and Anthony, the blood donors. Blood from their veins goes against gravity into a bottle hanging on an IV stand next to each of them, from there via an aerial network of IV lines and connectors to a receptacle, and then the cephalic vein of Nirupa Roy in a quick stream. It seems that not only did Desai not attend his school biology and physics classes, but he also didn’t appoint anyone remotely connected to a hospital to serve as a consultant.

The newer films coolly verbalise about the pathological; it doesn’t matter if the real truth of the pathological fact is missing. Much filmic satisfaction comes from creative licence. As the disclaimer in the recently released Paa says, “Creative licence has been taken with the physical manifestations of the disease.” Indeed it has: children with progeria hardly ever grow beyond four feet. And Vidya Balan makes a rather fetching gynaecologist (unlike those in real life) with a practice lush enough, at 33, to get her a chauffeur-driven Honda Accord.

That’s alright, at one level: the Bombay film is not a cinema of reality. Its representations are poetic and metaphorical. But when the diseases are complex, using them as gimmicks to dress up a story—while claiming at the same time to have “sensitised” mass audiences to them—becomes a way of lampooning those who actually suffer from them. In My Name is Khan, Shahrukh Khan, who suffers from Asperger’s, is no different from the Shahrukh of Asoka, with his constant set of oddities in pitch, intonation, prosody and rhythm: what Wodehouse would’ve described as “reminding the hearer partly of an escape of gas from a gas pipe and partly of a sheep calling to its young in the lambing season”. His repetitive motor behaviour extends Asperger’s far beyond its clinical definition. Indeed, the Khan takes head-bobbing to the level of the martial arts. Why claim to deal with complex issues of high-functioning autism, dyslexia or whatever when all you’re peddling in the end is conventional Bollywood drama?

(The writer is a Delhi-based vascular surgeon. His debut work of fiction, Perineum: Nether Parts of the Empire, was published by Penguin in 2007.)

‘Checking Corruption Will Take Some Time’