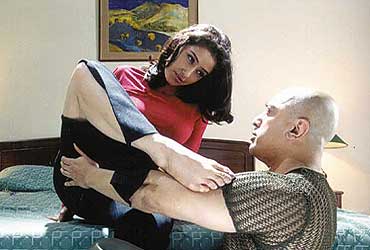 Fear Is The Key, Kamal
Kamalahaasan has been ready with his new techno flick Abhay for quite a while. Based on a novel written by Kamal himself, the film has him in a double role—as a commando and a psychopath. The soundtrack, with some weird music by Shankar-Ehsaan-Loy, hit the market a month ago and has already made it to TV countdowns, but the producers have been dithering over the film’s release. First, the Batman-Superman-inspired special effects, done in collaboration with Australian experts, took some time. Then the extended success of Lagaan and Gadar meant a problem in showing in the desired theatres. Finally, the film was to hit the screens on September 28 but that would have meant just a 46-day run till Diwali, a crucial day when the exhibitors would have yanked it off from important cinemas to make way for the newer films. And the unwritten code of filmdom is that a star’s film has to run for 100 days whether people watch it or not. So now Abhay is set for a Diwali release. That is, unless another cracker bursts on the way.

Filmmaker Pankaj Parashar is a bit confused. The fourth estate has gone out and declared that he’s making a Hindi version of Charlie’s Angels with Sushmita Sen, Shilpa Shetty and Raveena Tandon as the terrific trio. That’s not true, says the techno-whiz, best known for Karamchand, Jalwa and the disastrous Rajkumar. Not Charlie’s Angels, Parashar claims he’s doing one better. His ‘version’ will have not three but four angels and no Charlie. Challenge will be a rare action flick without a hero. Instead, it will have four girls who hate each other but are thrown together by circumstances. "It’ll be a lot of fun," promises Parashar. Sushmita and Diya Mirza are already in, negotiations are on with Raveena and Shilpa. Buzz has it that the four-member team will be sent to Hong Kong for a crash course in karate. Is Jackie Chan playing teacher?