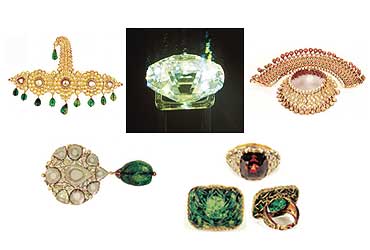 Starry-Eyed
Considering that some of the country’s most priceless stones are mounted in foreign museums and crowns, the Nizam’s Jewellery exhibition is an achievement for the GoI to have acquired it at a much-devalued price of Rs 218 crore. But it’s an achievement the country’s top institutions aren’t equipped to handle. For example, the National Museum, host to the 173-piece collection, will be turned into a virtual fortress, manned and regulated by men in khaki and metal detector doorways, during the entire six-week period of the exhibition. People queueing up to catch a glimpse of the legendary collection will get exactly half an hour to file past the bullet-proof glass tantaluses enclosing the sparklers. This half-hour of visual pleasure will come at a price of Rs 50 for Indians and Rs 500 for those holding foreign passports.

But the treasure has a way of causing sleepless nights. On June 28, as news of the collection’s arrival broke, it caused a security situation that was followed by clampdown orders on officials involved in the transfer. Delhi Police Joint Commissioners, no less, were asked to sniff and vet the jewel’s passage from the airport to an unknown destination when the trove arrived on June 30. Since their arrival in the city till the Department of Culture decided to release information a few days ahead of the exhibition, National Museum experts working on the collection were sworn to secrecy. Dr U. Das, assistant director general of the museum, attributed the silence to the threat perception.

Now what remains to be seen is whether the cloying concern was worth the trouble.
Dhiraj Singh

Is Delhi heading the Bangalore way? Perhaps yes.Close on the heels of the announcement of a refurbished Fireball (renamed Nyx) in neighbouring Gurgaon, another watering hole has opened its doors in the southern parts of the Indian Capital, Saket to be precise.Named Buzz, Delhi’s latest pub is the brainchild of Gagan Kapur and C.S. Oberoi and hopes to cash in on the milling crowds which are never in short supply at Delhi’s pvr Anupam shopping complex. The launch party last week was attended by the usual Page 3 fixtures—designers Rohit Bal and Suneet Verma and models Ajay and Vijay Balhara among others. "We are looking at it as an ideal place to party which will also double up as a comfortable hangout," says Kapur. With the classy decor and moderate rates, that shouldn’t be a difficult task to manage.

At Mumbai’s unashamedly British pub Geoffrey’s, a hallowed tradition of drunken banter has given way.For a change, the onus of delivering ‘the lines’ is on a woman. Good humour officially visits a pub for the first time in India, when theatre personality Mahabanoo Kotwal gets down to work every Thursday at 10 pm. The lady performs a string of stand-up comedies and short skits that satirise food, marriage, men and other perishables. She has been variously praised and thrashed for her humour but the consensus is that she gets it right most of the time. "The pub approached me for a one-year deal," Kotwal says, "but I thought that was a long time. So, we decided to have a weekly performance of about an hour, for 3 months." Everything, otherwise, goes down well, in Geoffrey’s.
Manu Joseph

It’s all about learning without really being taught.Tarun Taaleem is an alternate, open-ended education initiative started in the Capital. The idea is to create a non-classroom situation where children are free to make mistakes and learn on their own, where things are left largely to their own initiative and sense of wonder. An exhibition of children’s work done during Tarun Taaleem’s Summer 2001 workshops was held at Mirambika school earlier this week. It included Photosynthesis, a workshop jointly conducted by graphic designer Ranmal Singh Jhala and photographer Shailan Parker in which the children simultaneously learnt elementary photography and botany. Also on display was the work done in the terracotta programme conducted by Ambar Agnihotri and the wallpainting and educational rambles programmes. These will be ongoing educational programmes and in addition to them Tarun Taaleem plans to take kids on visits to villages and forests. Here they will do ‘shramdaan’ for water harvesting, plant saplings, learn craft skills and interact with village people, see historical sites and wildlife parks, gaze at the stars and generally take part in the festivities. Programmes for the future include workshops on cooking, calligraphy, creative writing and textiles.

It must be the first Bollywood film to have derived its success from a pair of scissors.Dil Chahta Hai will go down in cinematic history as yet another film which initiated a new hair-style. After Sadhana, Dimple and Amitabh, it’s now the turn of Akshaye Khanna’s Ceasar cut in DCH. The short and spiky hairdo has found takers in the celeb circuit as well, be it a politician like Omar Abdullah or a cricketer like Saurav Ganguly. In a spirit of solidarity of sorts, writer-director Farhan Akhtar and producer Ritesh Sidhwani too sport the same cut.

Make-up artistes and dress designers have been receiving their due in Hindi films but dch must be one of the rare flicks to have given official credit to the hairstylist. The novelty doesn’t end here. For most films, the stars bring along their individual designers and make-up people. However, according to Farhan, DCH used one make-up artiste and hair-stylist for all its stars to create "a uniform and consistently cool and hip look for the film". There were other advantages—the sharp goatee took years off the ageing Amir Khan, the short hair made Saif look different from his usual, boring self, and the mousy chuha cut made us overlook the fact that Akshaye is balding fast. Now to the lady who wears the crown of the star hair-stylist: Avan Contractor runs the upmarket Juice salon in Mumbai. But her cut is now available with practically all the friendly neighbourhood barbers. And it’s not just a matter of style—it’s also no fuss and easy-to-maintain.

Trash Of The Forthnight
Yeh Raaste Hain Pyaar Ke : How many times have we seen this one before? Two lookalikes, one gets killed, the other steps in as an easy replacement so that the wife of the former doesn’t die of grief. The charade is kept on despite all odds till the wife finally gets to know that her husband is no more and reconciles to her fate. Yeh Raaste... is too moth-ridden and boring. Every turn of the plot, every situation, every character is utterly cliched. Ajay Devgan’s face is like a blank wall, no emotion ever registers on it. Preity Zinta remains teary-eyed and Madhuri Dixit looks much too cheerful throughout. In her much-touted return, Madhuri cuts a sorry figure. Surely the lady should have graduated beyond the token seduction number which she gets to play out here as well. Yeh Raaste’s archaic and obsolete sensibility is sure to put any viewer to sleep.