When some worthy women went on the rampage; an IFW report card and Naghma does a new number...

For Once, Style And Substance
With the India Fashion Week at Mumbai hogging headlines, many thought a fashion show in Delhi would be a washout. Instead, the Cancer Patients Aid Association (cpaa) gala at the Grand Hyatt, even at tickets priced at Rs 5,000 per head, proved to be a total sellout, ostensibly because it had a cause. It wasn’t models who walked the ramp in the jam-packed hall but women who have carved a niche in their respective fields. Catwalking came easy to these ladies after they went through a day-long training with pros Noyonika Chatterjee and Manpreet Brar and sported outfits designed by Mumbai’s Shina N.C. Sashaying in sedate sarees and churidar-kurtas, there was actress Sushma Seth, golfer Nonita Lall, dancer Shovana Narayan, artists Anjolie Ela Menon and Bulbul Sharma, producer Anita Kaul Basu and journalists Nalini Singh, Sagarika Ghose and Sonia Verma. "Everyone does a musical night or a theatre to raise funds but we thought it would be important to showcase worthy women," says cpaa’s Sudha Murgai, who now plans similar events in Pune and Bangalore. Agrees newscaster Nalini Singh: "It was good to be in the company of resilient, optimistic women."
Shantanu Guha Ray 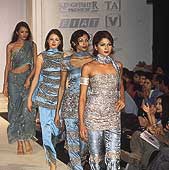 Monisha Jaisingh : She fills the void for well-designed western clothes.

Rajesh Pratap Singh : A very talented designer. One only wishes he weren’t so shy.

Rina Dhaka : Pure kitsch. It is very difficult to pull that one but it was bang-on. New York’s calling her.

Manish Malhotra : Feminine clothes, very wearable, buyable and subtle. Now to the confusion. The pret (ready-to-wear) lines went into diffusions and fusions tipped into couture. India Fashion Week also needs to promote new designers and include them in the official category.
Anna Singh

Rai Bahadur Mohan Singh Oberoi’s birthday assumed special significance this year, not only because he turned 103 this August 15, but also because the Jaipur Raj Vilas, run by his grandson Vikram Oberoi, was named the world’s best by the UK’s prestigious Tatler Travel Guide. Despite his poor health, the frail chairman of the Oberoi Group makes it a point to be informed on his group’s expansion, rides in his tiny golf car to the garden twice a day and interacts with a few, close friends at his farmhouse outside Delhi. Besides Tatler, Raj Vilas has also been named India’s best by the US-based Zagat Survey that lists hotels across the globe; US-based Gallaventers Guide rated Agra’s Amar Vilas, which hosted Pervez Musharraf, as the best in Asia along with the UK-based Conde Nast Traveler which put the property among its global hotlist.
Shantanu Guha Ray

It’s a feat to be proud of. Four Indian students won third and fourth places in different categories in the Intel International Science and Engineering Fair 2001, to come home with Rs 5.52 lakh worth of dollars. Yash Joshi modified a bicycle pump to recycle household plastic scrap; Ruchira Bajpai lowered hyperglycemia with custard apple leaves, and Bharat Mhatre with Amit Sowani designed a pollution controller and fuel collector to control oil spills in the high seas. Bharat and Amit have applied for a patent for their product while companies like ongc, Chevron and l&t are evincing interest in developing their invention. CM Vilasrao Deshmukh is excited as three out of the four students are Mumbaikars. Says Avtar Saini, director, South Asia, Intel: "India’s future depends on the next generation’s science, math and technology skills. Intel isef helps students achieve their potential." Is the Maharashtra textbook board listening?
Charubala Annuncio

Delhi’s night creatures are being lured to "surrender to the temptations of the dark". The latest hotspot to hit the cityscape is a night club suitably named after Nyx, Greek goddess of the night. Designed by Bijon Dasgupta, the high-profile art director of films like Hum Aapke Hain Kaun, Nyx is located at 32nd Milestone, where discotheque Fireball was before. Why Nyx now? "Fireball’s profile was younger, it was a high energy pop disco," says Rajeev Kapool, GM, 32nd Milestone. The new venue targets the 30-plus and lays equal stress on dining and dancing. "It will offer a fine dining experience, the best of international cuisine," promises Kapool. Another highlight will be the live band from South Africa. The 136-cover club is spread over three levels. The first level comprises a glass dance floor and a DJ console, the second has a bar, while the third houses a restaurant. The staff here wears outfits designed by Ritu Beri. The hangout will remain open six days a week with Monday as the day of rest. The best deal: there’ll be no cover charge.
Namrata Joshi

People used to seeing cobweb wall-hangings and paan-streaked grafitti on platform walls were in for a surprise at the New Delhi station this August 15. 24 fine and graphic artists, and photograhers from Bihar, UP and Delhi put up their works for Jijivisha (desire to live), a poster art and photo exhibition. The railways said no to sculptures, framed paintings and ‘explicit’ works which meant "they rejected more than 50 per cent of our works," says Sanjay Chaturvedi, the man behind the effort, "but the important thing is that they let it happen."
Dhiraj Singh

Naghma the ‘item’ rightly lends her gifts for an ‘item song’ in Priyadarshan’s latest film, Yeh Tera Ghar Yeh Mera Ghar, starring Sunil Shetty, Mahima Choudhary, Paresh Rawal and Saurabh Shukla. "Indian film songs have been moving out of the country to the Swiss Alps and other places," says Priyadarshan. "I wanted a number which was rooted right here, yet very different." And so this song captures the hardcore Maharashtrian custom of breaking a dangling pot of butter on Gokulashtami day. The song was shot over five days in Hyderabad. A human pyramid was especially exported from Mumbai. "The pot was hung some 38 ft above the ground," says the director. Naghma’s dance is "an expression of the thought process" of a character played by Mahima. The film itself is about middle-class tensions in big, bad Mumbai, nothing new.
Manu Joseph