Did Nasheed’s liberal evangelism provoke an opposite reaction? 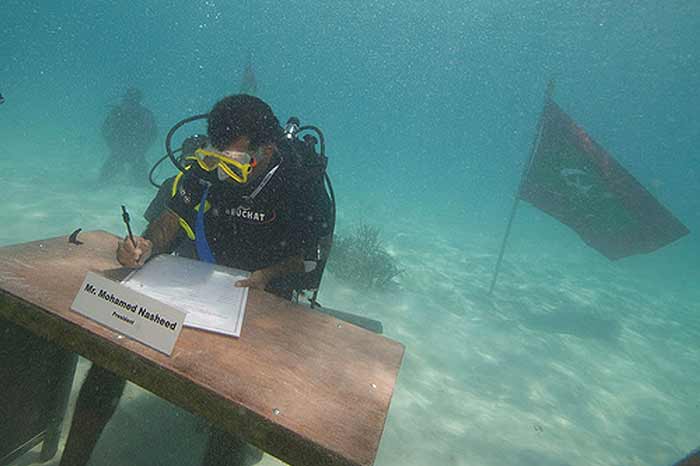 When the first democratically elected president of Maldives, Mohamed Nasheed, was compelled to resign last week, New Delhi wasn’t surprised, aware as it had been of the mounting discontent against him. As street protests against Nasheed scaled new heights with the arrest of Abdulla Mohammed, chief justice of the country’s criminal court, mutinous police forces joined the demonstrators on February 7, rekindling memories of the 1998 coup which India had sent its troops to quell. Ultimately, though, as the sun set on the islands, India did not parachute into the crisis and Nasheed was ousted, by in his own words, “forcibly”. A day after, with riots breaking out between pro- and anti-Nasheed groups, a criminal warrant was also out against him.

But the happenings in the Maldives soon produced contradictory versions. From Male, Ibrahim Didi, the president of Nasheed’s Maldives Democratic Party (MDP), told Outlook, “The government headed by Mohamed Waheed Hassan Manik is unlawful, we do not recognise it. What happened on Feb 7 was a 100 per cent coup by the police and some members of the armed force.” Nasheed, it must be pointed out, headed a coalition government in which Waheed, belonging to the Gaumee Itthihaad Party, had been the vice-president.

Didi says Nasheed was compelled to resign and sign a document saying he had stepped down to prevent violence in the country. The release of the document had the media and people hail Nasheed’s sagacity. Yet, on February 8, Didi claims, the Waheed government initiated a crackdown on the MDP, picking up Nasheed and other colleagues. “The entire country has turned into a police state. Rampant atrocities are being committed on MDP members to stop them from protesting against the forcible ouster of Nasheed from office,” Didi claimed. 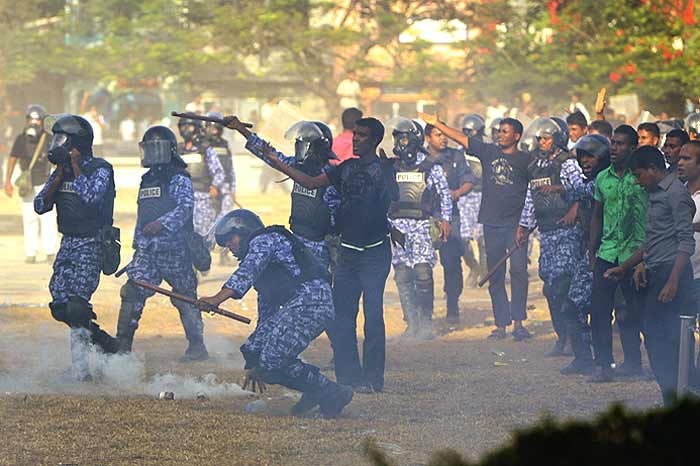 Policemen clash with the military on Feb 7, 2012

New Delhi, however, sees Didi’s remarks as a ploy to whip up support for Nasheed at home and abroad, after having failed to get India to intervene. Indian sources say Nasheed is perhaps hiding with one of his supporters even as party activists stoke protests against the alleged crackdown on the MDP. Didi has also appealed to India to use its good offices to initiate a dialogue between Nasheed and other political parties, and restore his government (the MDP remains the largest party in parliament). New president Waheed too called up PM Manmohan Singh seeking support. So who’s New Delhi backing, Waheed or Nasheed? Says a senior Indian diplomat clued into the happenings, “It’s not our job to save individuals. We are there to help the Maldives and its people.”

“Waheed’s govt is unlawful...what happened on Feb 7 was a coup by the police and some members of the armed forces.”
Ibrahim Didi, President, MDP

This has been India’s stand right through the last three years, during which it chose to act as a facilitator in bringing together political opponents to the negotiating table, nudging them to resolve their differences, work together. India has eschewed the option of direct intervention for various reasons. One, it has good equations with all the major political players in the country and does not want to play favourites. Second, had India interceded on Nasheed’s behalf, it would have invited flak from the international community and, more importantly, the Maldivian people. Three, though India hailed Nasheed for his various reforms, it was disappointed at his inability to make the transition from an activist to a matured politician who could bridge differences with his political opponents. Nasheed, in fact, managed to achieve just the opposite—such was his zeal in pushing reforms that he managed to alienate most of the parties supporting him, as also the judiciary, police and parliamentarians. His three-year tenure saw many key members of his government resign in sheer frustration.

Nasheed’s departure, though, raises serious questions about the stability in the Maldives and, at least in some quarters, the spectre of Islamic fundamentalist forces occupying political centrestage. To most Indian observers, Maldives has traditionally been a moderate Islamic country, where religion was never a guiding principle—not even in granting employment to outsiders (some one lakh), many of whom dominate the hospitality, education and health sectors. “It’s wrong to say Maldives is witnessing a rise of religious fundamentalist forces, though in certain aspects, especially when it comes to attire, it borders on conservatism,” says N. Sathiya Moorthy of the Observer Research Foundation.

Indeed, on the streets of Male, there are more burqa-clad women today than, say, a decade earlier. But this, analysts say, is part of a global trend of reaffirming religious identity, a phenomenon common to many Muslim countries. Analysts also tend to unfairly dub the Maldives as fundamentalist just because its people, over the years, have got increasingly vocal in their criticism of US policies in Iraq and Afghanistan.

Partly, the Islamic strand has become increasingly visible in reaction to Nasheed’s deliberate policy of provoking the conservatives. Among these were his controversial decisions to ban an Islamic religious school in Male and allowing liquor and pork even on those islands inhabited by the local population. Earlier, these were served only at island resorts which didn’t have a Muslim population. Further, he tried to introduce direct flights from the Maldives to Israel to attract high-end tourists, but rescinded his decision after vociferous protests.

Some say Nasheed could never suppress the activist in him and fervently wished to project himself as a liberal, secular leader. When Islamic NGOs organised a rally on December 23 last—in protest against the attempt to dilute religious practices—Nasheed organised a counter rally the same day. Already peeved over his economic policies, rivals joined hands with Islamic groups to weaken Nasheed. “Islam was brought in as a unifying force in the country by his political opponents,” explains Sathiya Moorthy.

Today, nobody is willing to hazard a guess on what lies in store. With over 45 per cent of the 3.5 million population under the age of 25, Maldives has a huge youth dividend. Ardent supporters of Nasheed during the 2008 pro-democracy movement, they are now disillusioned as he failed to deliver on his promises of delivering progress. Many fear that the same voices could now align with the more conservatives among the Islamist parties. Former Indian diplomat Kuldip Sahadev feels “it’s surely a factor on which we will have to keep an eye”. In all this, it’s imperative for the Maldives to become politically stable. Otherwise, it could well enable the fundamentalists elbow room to outmanoeuvre and upstage the pantheon of secular leaders.

“His Views Are Those Of A Patriotic Indian”