Now, a billion blues. Even before the Cup begins in earnest, India is out of it. 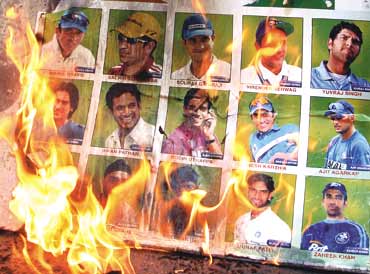 It is amazing how a bunch of 11 men can manipulate a whole nation's emotions from fond hope to utter despair and disappointment, from anxiety to anger—all in the span of a few hours. A nation full of fickle and forgiving fans sat through Friday evening with a prayer on its lips, only for its favourite bunch to let themselves and their die-hard supporters down with a second capitulation in a week.

Viewed dispassionately—can there really be such a thing?—India paid the price for having lost its opening match to Bangladesh on April 18. It was expected to breeze through that game. Having got its back to the wall, it was hoped India would fight back with a victory over Sri Lanka. That was never realised either. "We haven't played good cricket," admitted skipper Rahul Dravid, crestfallen and speechless. "You can't be winning big games if you lose wickets at such frequent intervals."

The dressing room, expectedly, wore an eerie atmosphere as the Indian captain and his mates got ready for another bout of mayhem from some exasperated fans. The match had not even ended when whispers from the Indian dressing room suggested that ex-captain Sourav Ganguly had been identified as a prime villain for having batted through nearly 11 overs to make a mere 7 runs. He had played 23 deliveries, and fell in trying to force the pace. But the rest were no better. Sachin Tendulkar fell to the second ball, Yuvraj Singh was run out, Mahendra Singh Dhoni left with a golden duck and Dravid himself was left playing Horatio one more time but to no avail.

It couldn't have been a worse opening week for cricket's showpiece, with the murder of Pakistan coach Bob Woolmer cloaking the event with a shocking shroud. The exit of Pakistan and India—its hopes hanging on the slenderest of threads represented by a Bermudan win against Bangladesh in the final match of the group—has left the event without the subcontinental rivals in the Super Eights. The first speculative murmurs that bookmakers had their say in such inglorious departures have already been heard as Ireland and Bangladesh celebrated their gatecrashing into the second phase of the Cup. 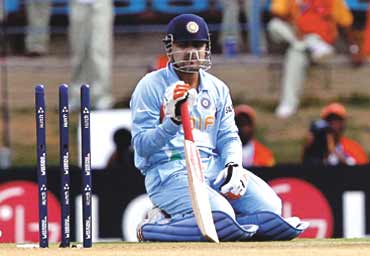 It was the first time since '92 that India was crashing out of the World Cup after just the first round. For a nation that has idolised its team—fairly or otherwise—the campaign ended quite bitterly. The team had flirted with the Super Eights for a brief while on Friday, looking assured against a team it had beaten often in recent months, only to cave in by a whopping 69 runs. There will be questions over the odi careers of men like Sachin Tendulkar, Sourav Ganguly, Rahul Dravid, while Anil Kumble has already indicated that this would be his last joust with the instant variety of the game. It is not as if there is a huge talent base waiting in India to take over from the lot that went to the Caribbean. And that is something Indian fans must take into account.

Perhaps, the frenzy that surrounds the sport each time the team plays at home will now simmer down. Of course, angry, upset, depressed and stupefied fans will prepare to treat the business end of the ICC World Cup '07—the Super Eights in which teams like Bangladesh and Ireland could offer the other six teams easy pickings—as just another multilateral tournament. "The World Cup has ended for me," said one fan, Shubhra, as she switched off her TV set and hoped to catch up on some lost sleep. "Now I don't care who wins the Cup."

The fans may yet express themselves in a myriad, hopefully non-violent, ways. But companies that have committed huge amounts of monies to the marketing and promotional campaigns around the Cup may have burnt their fingers. A number of corporates—Reliance Retail, to name but one big example—were getting ready to launch Cup-related merchandise but will have to brace themselves to there being no takers anymore. Who would want to associate themselves with losers?

So much money was riding on Friday's game—and we are not yet talking about the cash that changed hands in the betting market. There is at least one assessment doing the rounds that the value for the TV advertisers' money will come down enormously. World Cup official broadcaster Sony Entertainment Television ceo Kunal Dasgupta geared himself up for his team to be pressed by advertisers to lower rates for spots on the live telecasts. "The Cup will be a big flop in India and advertisers will lose value of their investments. We may lose money even after selling all slots. The format of the 2007 World Cup is flawed. In a 48-day tournament, if teams like India and Pakistan are out for playing bad cricket in two matches, there is something really wrong. We were against this format and even told the International Cricket Council to reconsider it," he said.

It will be worth looking at some key factors in India's campaign. It was unable to bridge potential and performance because it did not pay attention to the small things that count. Many reckon the turning point was in not sending a team to check out our venues, particularly Port of Spain where it played its three group B games. Nearly all other teams had sent such advance parties. Dravid and his team read the pitch wrong in the match against Bangladesh. 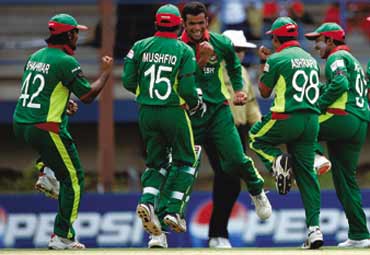 India has also spent the past two years under Chappell's tutelage with no bowling coach in the dispensation—and it perhaps paid the price. The faster bowlers did not show the smart changes of pace. There seemed to be no one to tell them to cut down the pace. Harbhajan Singh seemed to have lost his wicket-taking skills and nobody was around to advise him. A score of 191 against Bangladesh was not too small a total to defend, but India's fast medium bowlers offered the Bangla teenagers width and the pace to make merry. They could not bowl out lowly Bermuda until the team had made 156 and batted for more than 43 overs. India also allowed Sri Lanka to get away to 256 for six from 97 for three at the halfway stage.

They also made tactical mistakes. When he won the toss and opted to bat on a new track in the game against Bangladesh, Dravid may have reasoned that India's classy batting line-up would post a big score to set up victory. The first of the batting failures surfaced and stung India. We will never know what Chappell actually thought of the decision but he backed the captain in public. "We would still bat first, conditions being the same," he said when asked if Dravid had made a mistake.

India's collective sigh of despair must be audible half way across the world in Port of Spain. And the growing rumbles of discontent can already be heard. Normally reasonable people have already lost their sense of proportion and are expressing themselves quite angrily—asking, say, Tendulkar to run his restaurants, or Chappell to return Australia and Dravid to hang up his boots.

A nation starved of success in the sporting arena has to endure another agonising four-year wait, hanging on to the 1983 conquest, as a billion dreams were crushed under the weight of one poor outing after another. Yes, a couple of weeks ago, Outlook had a cover showing Rahul Dravid and his team with the World Cup. It was a dream that we were also lulled into.

By G. Rajaraman In Delhi And Debasish Datta In Port Of Spain