Down The Sleaze Street

The Congress sex scandal promises high dividends for the BJP 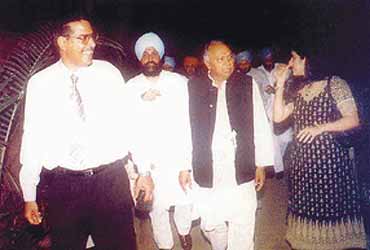 outlookindia.com
-0001-11-30T00:00:00+0553
Denials and defamation suits can't undo the damage once it is done. Gujarat chief minister Narendra Modi knows it only too well. So, when the Congress turned on the heat on P.K. Dhumal by hurling allegations of corruption against him, Modi has paid back by exposing a 'Congress sex scandal', involving two Punjab ministers and a Congress MLA.

According to the Gujarat police, the names of the two Punjab ministers (Pratap Singh Bajwa and Amarjit Singh Samra) and an MLA from Delhi (Arwinder Singh Lovely) surfaced in a sex racket busted in the city last week. They have been accused of "availing sexual favours from call girls" during their stay in Ahmedabad's plush Taj Residency Ummed Hotel during the campaigning for the December 12 assembly elections in Gujarat. While the Punjab government has denied this and those named have filed Rs 100-crore defamation suits against the Gujarat government, Modi is already on the campaign trail in Himachal. And the scandal is his ace.

Surprisingly, the call girl issue isn't a new development. More than two months have passed since the allegation against the Punjab leaders first did the rounds in Ahmedabad. But the police had little evidence to prosecute the politicians.

The manner in which the crackdown was announced was unprecedented. It was not the police commissioner or the dgp who briefed the press but minister of state for home Amit Shah. He informed journalists that the police had busted a sex racket in Ahmedabad involving 22 posh hotels, several call girls and their rich clientele. Interrogations of the suppliers, the car drivers and the girls reportedly gave away the names of the Punjab politicians. Shah, however, admits the politicians were not named in the fir as they were only clients and the Suppression of Immoral Traffic Act did not provide any punishment for those visiting sex workers, unless caught red-handed.

Shah went on to say that "the crime branch has irrefutable and substantial evidence" that a man-woman duo of pimps had supplied six college-going call girls to the three Congressmen during their stay at the five-star hotel in Ahmedabad from December 2 to December 9.

Meanwhile, the pictures of the politicians with Ditti Chudgar and her mentor Nirav Shah, who are allegedly the two main touts, have appeared in a section of the local press in Ahmedabad. The pictures don't appear to be incriminating enough nor do they give any clue about the location where the photo was taken.

The Gujarat police can now claim credit for busting a racket that's long known to have entrenched itself in Ahmedabad, Vadodara and Surat. Modi also has another reason to smile. The scandal has rubbed Shankersinh Vaghela the wrong way. The owner of the Taj Residency property in Ahmedabad, Ummed Singh Champawat, is his close associate and an aspirant for a Congress ticket in Rajasthan.

While the Congress may argue that anything is possible in these days of hi-tech computer imaging, the damage is done.

Caught In A Poll Blizzard