Down The Invisible Stream

Allahabad acquired its cultural iconicity in the spaces of the colonial public sphere, embodied in cafes, journals, educational institutions 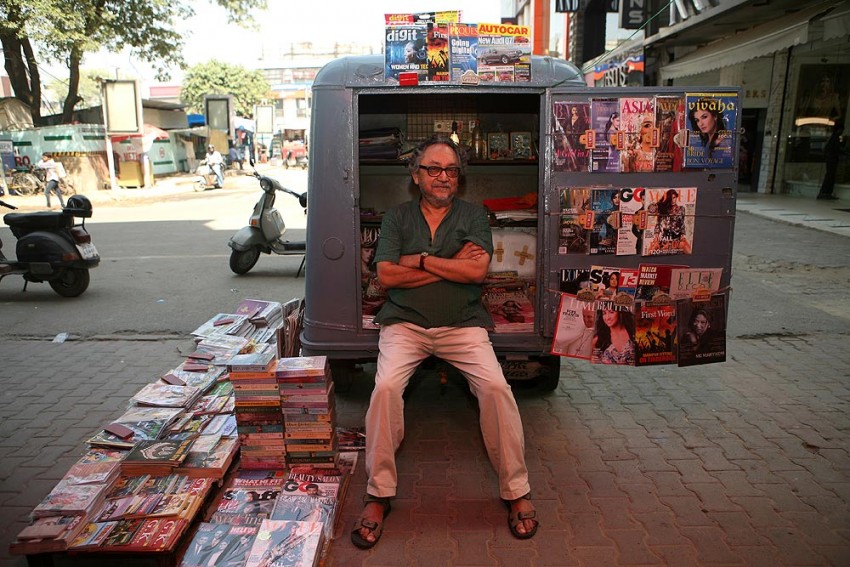 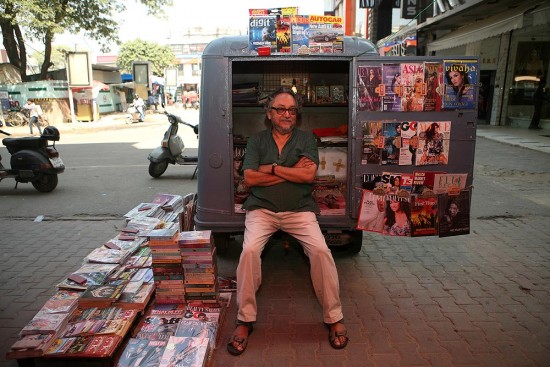 Allahabad enjoys a disproportionate iconicity. It is, after all, a nothing sort of place. Marked by a faded and often only remembered gentility, it inhabits a perpetual past tense, a grammatical absurdity no less poignant than “the last bungalow” huddling in the shadow of the latest multi-storeyed monstrosity. As Allahabad’s reluctant poet laureate put it long ago:

On maps it always takes
The same position: away from the coastline,
Two inches below
The mountain range....

It is barely visible in the great human crush of the Gangetic plain, and yet when the Bachchan declares that he is from Allahabad, the remark is more than merely an incidental one marking origin, it is perceived to carry some—some, but I fear indeterminate—cul­tural content. It is that elusive cultural content which is my theme here.

That apparent geographical insignificance is misleading. Allahabad dominates the great waterway that drains the plain, and was used, in times past, to transport its produce—grain or opium—down to the great markets of Calcutta. Its consequent military significance found recognition in the magnificent fort that stands guard over the storied confluence of the Ganga, the Yamuna and the invisible Saraswati, at least since Mughal times. Nearer our own time, in 1857, this strategic significance made Allahabad the base of the British fightback, and the venue of some of its most savage reprisals. It is reasonable to believe that the memory of this violence played into the emergence of Allahabad, in reasonably quick time, as the capital of an India that was as-yet-unfree, still struggling to be free. 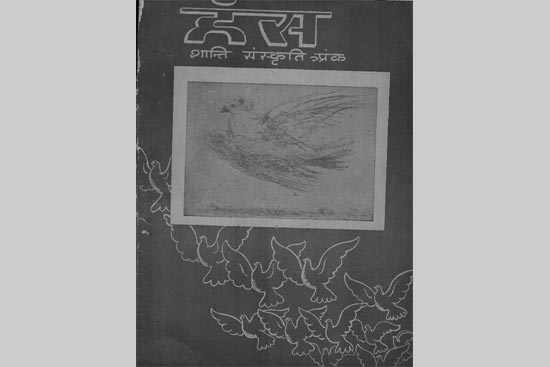 Hans, a literary flight A Hindi journal started by Munshi Premchand in 1930, and revived by Rajendra Yadav in 1986

However, the immediate sign of the post-Mutiny dispensation was the emergence of Allahabad as a great centre of colonial administration, the capital of the vast North-West Provinces. This is comparable, at some level, to the crystallisation of the colonial dispensation in the Presidency towns in the aftermath of the defeat at Plassey, but the inevitable chronological and geographical shifts—different place, different time—produ­ced interesting differences in the forms that colonial modernity took in the heartland. If one thinks of colonial mod­ernity as a sort of flexible hybrid of imitation and resistance, of counter-asse­rtion, of mim­icry and mockery, then it appears likely that the embrace of modernity in the heartland had more of the latter—likely, but I fear, arguable.

In these early journals, I have encountered articles that seek to educate readers about Cubism, or about revolutionary stirrings in Latin America.

The coming of modernity is universally associated with the emergence of what has now, after Habermas, come to be called “the public sphere”—a space embodied in cafes and teahouses, in journals and discussion groups, in educational institutions and publishing houses, fora where matters of shared public concern may be aired and pondered. This process is inevitably somewhat distorted in the colonies—as the colonised seek to hold the coloniser to his ‘modernising’ rhetoric, even as the coloniser seeks to fudge the rhetoric into becoming an endorsement of the compromises (and worse) of administration. And, distortion and all, the iconic cultural significance that Allahabad acquired had a lot to do with the emergence of this colonial public sphere.

It is entirely appropriate that one of the first journals that emerged was called, naturally, the Modern Review. As it happens, in time the editor of the journal, Ramanand Chatterjee, moved to Calcutta along with his journal. However, the burden of modernity was taken up by a host of Hindi journals that deserve to be better known than they are now—by the later exploits of their pioneering editors. Thus, Malaviya’s Abhyudaya had an ambitious modernising agenda, and was as yet relatively uncoloured by Malaviya’s later Hinduising tendencies. This intellectual and cultural ambition is even more remarkable in the other journal that played such a crucial role in the formation of the Hindi heartland’s modern cultural identity—Saraswati. 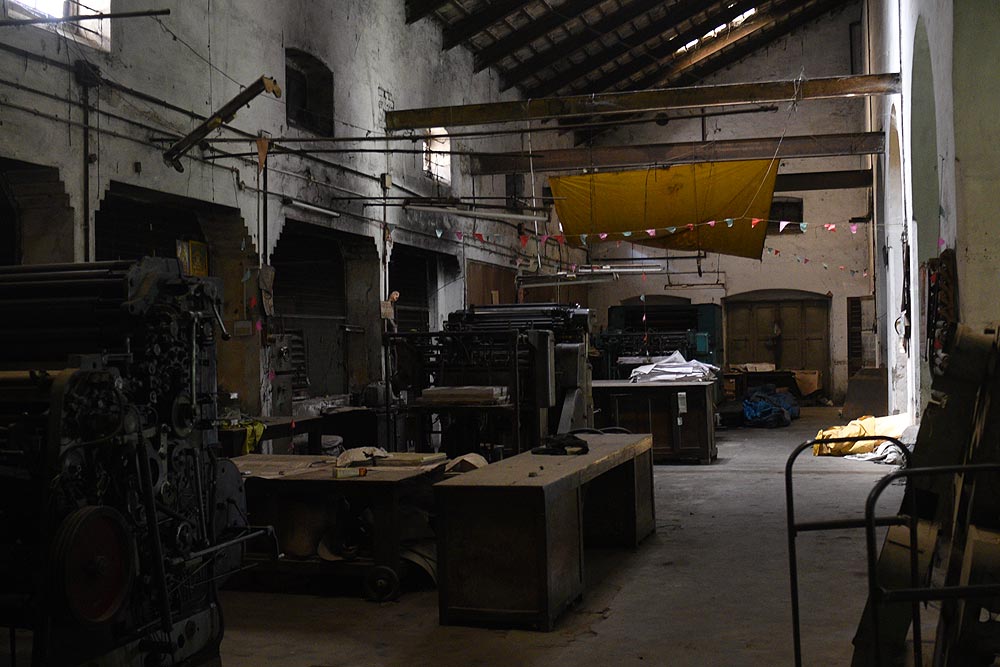 It is particularly remarkable in the light of the narrow, shrunken horizons that one associates with the heartland—the cowbelt, the gobar-patti—to see the intellectual omnivorousness of these early journals. Apart from the familiar, local issues, I have encountered in them articles that seek to educate their readers about the revolutionary stirrings in Latin America, and the emergence of modern painting, of Cubism. The process whereby this narrowing happens is a large and, I fear, still consequential historical subject: this darkening or un-enlightenment, the stunting of the heartland, call it what you will, has its roots in the past, but I fear that its fruits reach far into our futures.

Meanwhile, it is not as if the public sphere consisted entirely of high-minded pedagogues. It is hardly surprising that there emerged a vib­rant publishing industry that catered to widely different tastes and appetites. Thus, Allahabad was home to some of the pioneering literary magazines of the later half of the 20th century as well. The names of Hans, of Kahani and Nayi Kahaniyan, of Prateek which died soon after I moved to Delhi—these have become legendary, but I am relying only on my personal recollection, and I have little doubt that in the literary ferment of those early decades after 1947, all those restless young men—(not many women, I’m afraid: they play generally passive roles, obscure and distant objects of desire)—produced many other culturally significant journals which have gone to the heaven reserved for such shortlived good intentions.

Jasoosi Duniya and the clutch of wildly popular magazines published by Mitra Prakashan—Maya, Manohar Kahaniyan, Satyakatha—had to wait rather longer before they went to their just reward—but whether it was heaven or hell, it is not for me to say. What I can say is that this entire thriving range of popular culture was regarded with deep suspicion in the high-cultural enclaves in which I grew up, and it was only after I grew up that I realised that the Mitra brothers didn’t have horns, that they employed a perfectly decent artist—Satyasevak Mukherji—to dress up their offerings with lurid and often misleading images, and that they were a significant source of employment for Hindi worthies. I do not know how many of these once-popular journals have survived into the brash new post-literate age in which we now find ourselves, surfing officially-certified porn on mobiles. But it is certainly the case that the thriving publishing culture of which these journals, high and low, were a part, has passed. Presses there still are, printing machines doing their stuff, but the glory and the glamour has certainly past! Only memories remain—Allahabad’s besetting sin, time was, the perpetual past tense!—of the famous hospitality of the Mitras in their heyday. And dust blows where once the fountains played, so to speak. 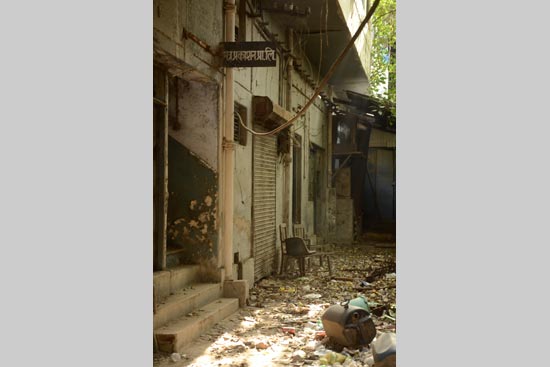 I hate to disturb the cosy nostalgia conjured up by those last cliches, but there is a final consideration that I would like to loop in before I finish. This has to do with the larger question of what happened to the multiple and thriving local cultures that one associates with the world of yesterday. Allahabad had its own mix of tradition and colonial modernity—but one is immediately reminded of the distinct local cultures of Banaras and of Lucknow. And beyond these well-known and iconic cultural configurations—places that can be indexed in fleeting shorthand—there are (or were) the vibrant local cultures that were associated with other, numerous, smaller places—the qasbas. Of course, pop sociology has an easy explanation for the decline and eclipse of local cultures: metropolitanisation, which is about as ugly a word as the metropolises that swallowed up this sometime cultural diversity! But while elegy is tiresome, it is well to be clear-eyed about the world that we are in: big and brutal, simultaneously large-scale and narrow-minded. Welcome to the future!

Alok Rai has taught English at IIT Delhi and Delhi University, translated Munshi Premchand, and authored Hindi Nationalism and Orwell and the Politics of Despair

The Man Who Found Shapinsky