Down The Foggy Ruins Of Time

Marqusee captures the spirit of an epoch that has gone by but still lives within many of us. In Dylan's own words: "Ah, but I was so much older then, I'm younger than that now". 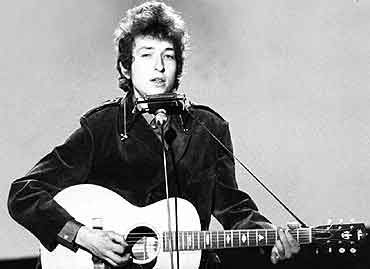 The verses and songs of Robert Zimmerman, better known as Bob Dylan, articulated the angst and aspirations of an entire generation. His lyrics and tunes, sung and recorded zillions of times, continue to enthrall thousands, even those who know nothing of the anti-establishment mood of the ’60s.

Over the decades, Dylan changed drastically, as did his music. His seminal The Times They Are A-Changin became an advertising jingle for an accountants’ firm, while a track from his 2001 album "Love and Theft" was used to promote lingerie. Dylan had fallen long before he became an abiding icon.

London-based Mike Marqusee has written as much about Dylan the man and his music as he has about the popular culture and politics of a decade. It may seem amazing to those who look at today’s neo-con America with trepidation that a slogan of the early ’60s used to be: "Communism is 20th century Americanism".

As Marqusee reminds the reader at the outset, despite sales of more than 35 million records, tapes and CDs, Dylan has been outsold not only by the Beatles and Elvis...