A reporter's notebook isn't for painting with bile and spleen 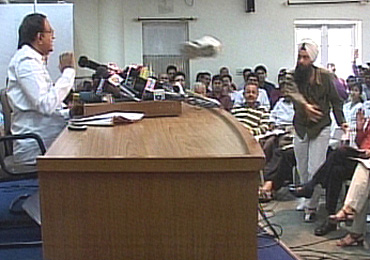 outlookindia.com
-0001-11-30T00:00:00+0553
Has Jarnail Singh, the journalist who threw a shoe at home minister P. Chidambaram, become a hero among scribes? Journalists who routinely attend briefings organised by political parties and ministries say the gesture was certainly eye-popping and may have had a degree of appeal. Many joke that they would all love to start chucking shoes and even pelting politicians with tomatoes and eggs. Yet, there is an overwhelming belief that it was not professional conduct.

Indeed the "shoe chuck" has brought into focus the larger issue of charlatans posing as scribes also having their say at media briefings. And many journalists have begun to express a growing intolerance for colleagues who take ideological positions at news briefings as opposed to just asking hard questions. The overwhelming view: a press conference is an occasion for a political party or a minister to put forth a point of view that the scribe may or may not agree with. Most members of the fourth estate just want to get the story and the job done. They do not really appreciate slanging matches, although sharp questions are respected by all.

And India is not Iraq and we don’t really need to chuck shoes at anyone, no matter how grave the provocation. On most days there are several press briefings in Lutyens’ Delhi. In India there is an easy camaraderie and trust between reporters and politicians that both have long nurtured. Chidambaram certainly did not deserve to be treated that way by anyone.

Indeed, this correspondent has sat through briefing after briefing by VHP leaders like Praveen Togadias who have used every possible abuse for Muslims. Many of us—Hindu, Muslim and Sikh alike—have covered vicious riots like Gujarat and their aftermath, where we may have wept, but never considered hurling abuse or our footwear at a media briefing. No matter what horror we cover, what political indecency we routinely witness, a journalist cannot choose to behave like an activist.

Two days after the shoe chuck, a revealing incident took place at the Congress briefing conducted by Jayanthi Natarajan. In the midst of questions about Tytler, suddenly a voice started to shout from the back of the briefing room, "Why do you not hang Afzal Guru? Why do you support terrorists?" Jayanthi calmly asked the questioner to identity himself. It was an RSS-backed news channel. The entire media room booed. Sloganeering cannot be passed off as journalism.